Romano talks about Dred Scott and 1857, not Trump's tweet yesterday 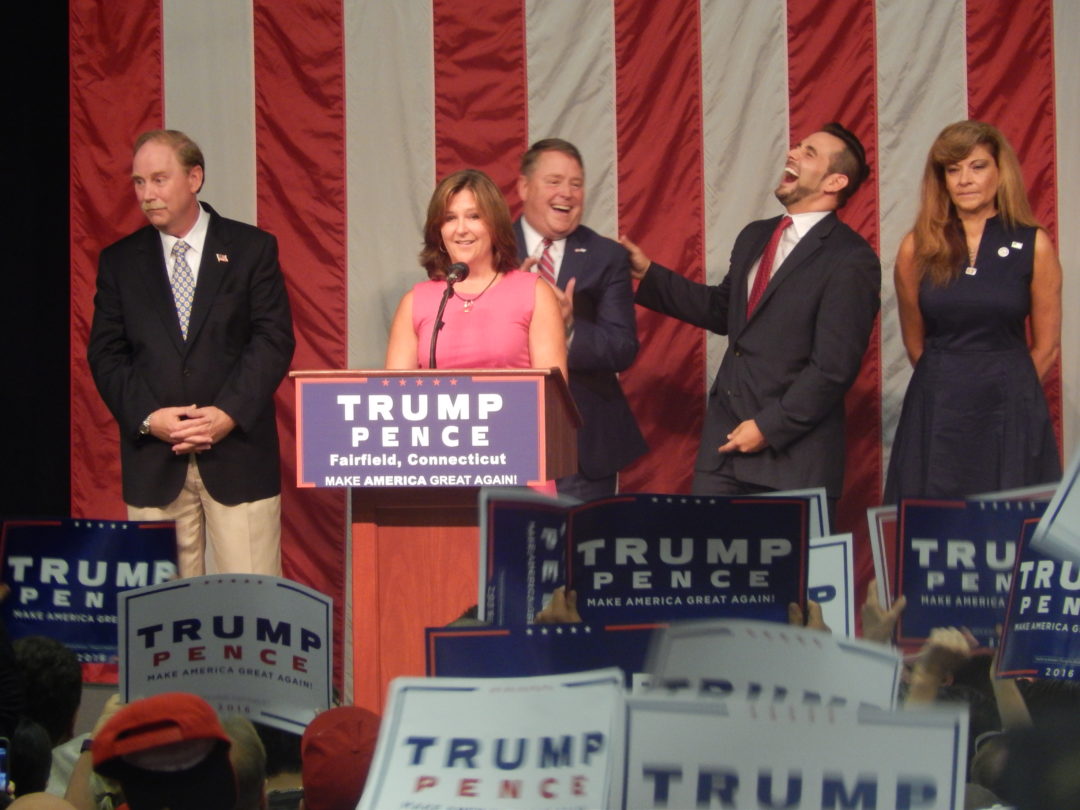 On a day when a monument to Christopher Columbus came down in Hartford at the direction of a Democratic mayor, Connecticut’s state Republican chair called on the Democratic Party to change its name in recognition of its own human rights failings.

The GOP’s state central committee intends to adopt a resolution condemning the history of the Democratic Party, which sprang to life in the slave-holding South and amassed a long record protecting segregation before embracing labor and civil rights — and ceding white southern voters to Republicans.

“We demand that the party change its name,” said J.R. Romano, the state GOP chair. “For me, I believe it is vital that every citizen know the truth about the so-called party of inclusion and acceptance. If we are to hold Christopher Columbus accountable for over 500 years after the fact, it is our duty and moral obligation to hold the Democratic Party accountable.”

The resolution and Romano’s call echoes the approach of President Donald J. Trump, whose first instinct is to go on the attack, as he has with demonstrators who have demanded the removal of statues of Confederate generals.

Over the weekend, Trump retweeted a video of a supporter chanting “white power,” and he expressed support for the prosecution of men arrested for defacing a statute of President Andrew Jackson, a Democratic Party founder now disavowed by many Democrats over his support of slavery and the forced relocation of American Indians.

If we are to hold Christopher Columbus accountable for over 500 years after the fact, it is our duty and moral obligation to hold the Democratic Party accountable.”— J.R. Romano, GOP State Chairman

Connecticut is one of the many states where Democrats renamed annual Jefferson-Jackson fundraising dinners, evidence of what the Democratic state chair, Nancy DiNardo, says is a willingness to evolve and confront a history of protecting agrarian big business, which made the party anti-labor as well as pro-slavery and pro-segregation.

“Democrats recognized the error of their ways nearly 100 years ago and since then have supported the New Deal, the Civil Rights Act of 1964, the Voting Rights Act of 1965, gay rights, gay marriage, choice, health care for all, racial justice and demilitarization of police, just to name a few important milestones, many of which Republicans have worked to defeat,” DiNardo said.

Without question, the Republicans were the party of Lincoln, founded shortly before the Civil War, with northern “radical” Republicans pushing and ultimately failing to keep the GOP fighting for political and economic freedom for Blacks during Reconstruction.

Both parties evolved, with Republicans becoming the party of big business and Democrats turning to the left during the Great Depression and the presidency of Franklin D. Roosevelt, even though southern segregationists remained important to the Democrats through the civil rights movement of the 1960s. 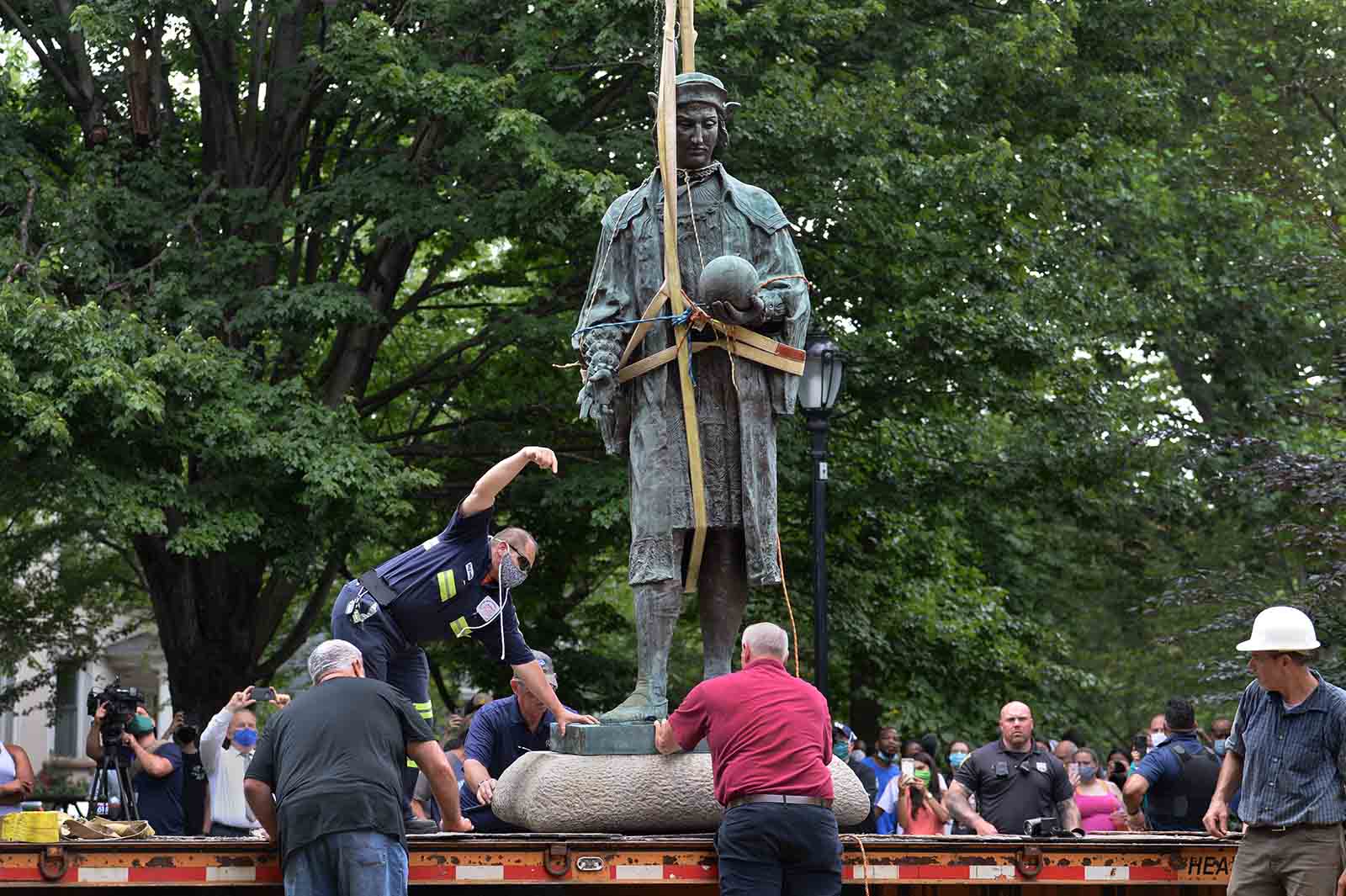 Crane operators and city workers guide a statue of Christopher Columbus onto a flatbed truck after it was removed in Wooster Square Park in New Haven last week.

Since the election of Richard Nixon in 1968 on a southern strategy that exploited Democrats’ new identity as a civil-rights party, the contemporary racial identities of the two parties are evident in voting patterns. Republican presidential candidates now typically win nearly 60% of the white vote, while about 90% of the African-American vote goes to Democrats.

Democrats say Republicans want to talk about the past when the topic is human rights, because the present is an uncomfortable subject for the GOP.

“Just yesterday, the Republican President of the United States retweeted video of a supporter declaring ‘white power,’ without a word of rebuke from J. R. Romano or the CT Republicans,” DiNardo said in an email. “Forget changing our name — Republicans need to take a long, hard look at themselves.”

Hartford Mayor Luke Bronin said the timing of Romano’s press call underscored the GOP is more concerned with the Democratic past than the Republican present.

“It’s hard to find a better demonstration of what’s rotten at the core of the Republican Party today,” Bronin said.

Just yesterday, the Republican President of the United States retweeted video of a supporter declaring ‘white power,’ without a word of rebuke from J. R. Romano or the CT Republicans. Forget changing our name — Republicans need to take a long, hard look at themselves.”— Nancy DiNardo, Democratic State Chairwoman

Romano said the resolution was broached by state central committee members and will be adopted next month. The call for Democrats to change their name is serious, he said, and not a way to join Senate Majority Leader Mitch McConnell in suggesting that the past cannot and should not be erased.

“They have to be honest and apologize for their history,” Romano said.

Two weeks ago, McConnell, a Republican of Kentucky, objected to efforts to remove statues of Confederate heroes from galleries of the U.S. Capitol that feature two monuments contributed by every state.

“What I do think is clearly a bridge too far is this nonsense that we need to airbrush the Capitol and scrub out everybody from years ago who had any connection to slavery,” McConnell said.

Senate Minority Leader Chuck Schumer of New York used a bit of Connecticut history in his retort: “Candidly, I don’t think it would be too imposing to ask our states not to send statues of people who actively fought against this country. You know, there is a reason that Connecticut doesn’t send a statue of Benedict Arnold.”

Though Romano talked about Democratic support for the U.S. Supreme Court’s Dred Scott decision of 1857, which rejected a slave’s legal argument in favor of freedom and proclaimed that even freed Blacks were not U.S. citizens, he said Democrats had more recent questions about race to answer.

Joe Biden, the presumptive Democratic nominee for president, worked with white segregationists in his 36-year career in the U.S. Senate, and he was condemned in May for questioning the cultural authenticity of any Black voter who goes for Trump.