Lamont keeps bars closed, says, 'This is not the time to take a risk.' 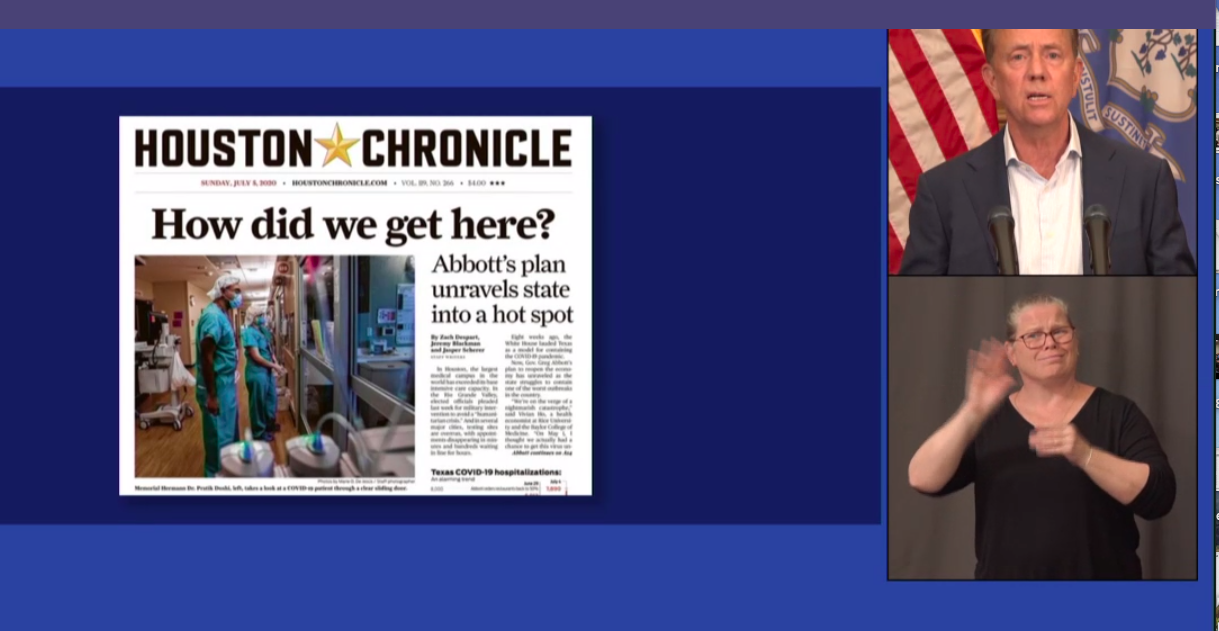 Gov. Lamont contrasted Connecticut with Texas at this briefing Monday. At right are the governor and his sign-language interpreter.

The rolling seven-day average of positive COVID-19 cases in Connecticut was less than one percent over the past week, lower than every other state except Vermont, Gov. Ned Lamont said Monday.

With fewer than 100 new confirmed infections a day, 885 contact tracers are able to follow up on 96% of all reported cases within 48 hours, but fewer than half of those contacts result in interviews useful in the prevention of outbreaks, Lamont said.

Connecticut is one of the few states releasing any tracing data, making broad comparisons of the state’s 47% contact completion rate impossible. But it is comparable to the 50% rate reported by New York City, said Josh Geballe, the state’s chief operating officer.

Geballe said that most of the incomplete traces were the result of infected persons not responding to phone calls or texts, though there were some reached who refused to share information about who they might have exposed to the virus.

“If you get a text that says CT COVID TRACE, respond,” Lamont said.

Despite the low infection rate, Lamont said he remains adamant about delaying the third phase of easing COVID restrictions as he watches infection rates spike in many states, prompting other governors to shutter bars that reopened weeks ago.

Bars will remain closed in Connecticut for the foreseeable future.

“I know how frustrating this can be, but right now, with this pandemic flaring up in a majority of other states, this is not the time to take a risk,” Lamont said.

Connecticut is one of only a dozen states with falling infection rates, he said.

“We should be thankful for that,” Lamont said. But he added, “Let’s not get too big for our britches.”

New York, New Jersey and Connecticut have posted travel advisories discouraging visitors from states with a new daily positive test rate higher than 10 per 100,000 residents or with a 10% or higher positivity rate over a 7-day rolling average.

[UPDATE: Delaware, Kansas and Oklahoma were added to the list Tuesday.]

Connecticut is asking visitors from those states to self-quarantine for 14 days, an impracticality for tourists. Lamont conceded Monday that the message to tourists in those states can be summarized as: Don’t come here.

The state has been advertising on social media in the hardest hit states, and airlines are making public-service announcements on Connecticut-bound flights about the state’s requirement to wear masks and self-quarantine.

Initial reports, he said, are that airlines are cancelling a number of flights from those states to Connecticut.

“So, there are many fewer people coming,” he said.

With falling cases, Lamont has curtailed the number of briefings. The data released Monday was the first since July 3.

Over the past three days, there were 259 new confirmed cases and three fatalities. COVID hospitalizations fell by 26 to 69.

Over the course of the pandemic, Connecticut has had 4,338 deaths attributed to the disease and 46,976 laboratory-confirmed cases.

More than half the deaths have occurred in nursing homes, but half of the state’s facilities have recorded no new cases among staff or residents in the past 14 days, Geballe said.