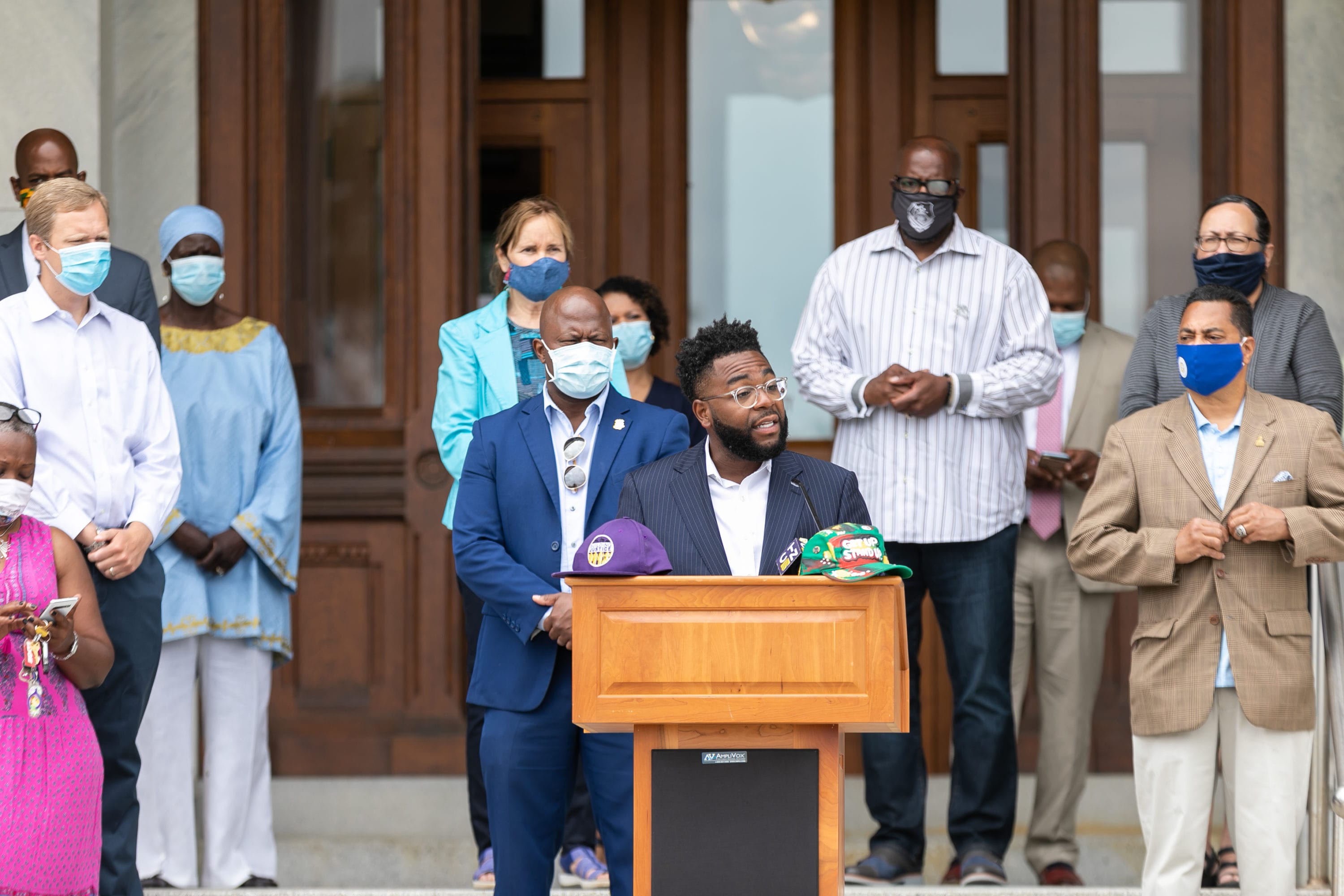 Members of the Black and Puerto Rican Caucus added their voices Tuesday to the growing calls for systemic reforms that would make life safer and more equitable for Connecticut’s residents of color.

Recognizing that “no single bill can right centuries of wrongs, let alone a few summer days in the Capitol,” Rep. Brandon McGee, D-Hartford and caucus chair, said the proposals were “a table-setting moment for what we hope will be viewed as a years-spanning commitment to racial equity in Connecticut.”

The proposals are similar to Senate Democrats’ Juneteenth agenda released last month. McGee said the measures are not in conflict with the ideas raised by his legislative colleagues, several of whom joined him Tuesday on the Capitol steps.

“Together they emphasize a growing commitment to systemic change among members of this legislature,” McGee said. “What we’ve done as a caucus, however, is honed in just a little bit more on some of those very, I would say, low-hanging fruit opportunities that would provide again, a larger conversation for policies that we’ve been working on so long, to be able to be passed, supported by our governor.”

Caucus members identified six pillars for reform: voting rights, economic justice, police accountability, education and housing equity and environmental justice. They called for more personal protective equipment for those on the pandemic’s frontlines, closing opportunity and resource gaps for children living in under-resourced school districts and expanding “no-strings-attached homeownership” opportunities. And they proposed updating environmental laws to account for the disproportionate impacts of poor air quality and industrial pollution on communities of color, especially important in the COVID-19 era.

“An individual with underlying health conditions attributed to poor air quality [and] industrial pollution are more susceptible to the detrimental effects of the virus,” said Rep. Geraldo Reyes Jr. , D-Waterbury, vice chair of the caucus.

McGee said caucus members are working with Sen. Gary Winfield, a New Haven Democrat and co-chair of the Judiciary Committee, on a police accountability bill for the upcoming special session. It isn’t clear whether those bills will be separate proposals or a part of the same measure, but they have similar themes: ending discriminatory policing that leads to a disproportionate number of minorities behind bars, expanding community oversight of police officers and creating an independent entity to investigate and hold cops accountable for breaking the law.

The particulars of the proposals are still being negotiated. McGee suggested parts of the agenda, like police accountability measures and new laws that would make it easier to vote, could be floated in the upcoming special session later this month, but others could be dealt with in a second special session later in the summer or fall.

Absent from the caucus’ agenda were any proposals to redistribute wealth through tax reform.

Over the past few years, various progressive groups have advocated for higher income tax rates on Connecticut’s wealthiest residents, new and expanded credits to provide state income tax relief to poor and middle-income households, and increased municipal aid to the state’s urban centers.

The Black and Puerto Rican and House Democratic Progressive caucuses, which share many members, pushed for many of these initiatives as recently as last January, when the regular 2020 General Assembly session began.

“True economic justice cannot be achieved until we end the criminalization of poverty and level the playing field for all,” McGee said.

Democrats advocating for a more progressive state and local tax system know one major obstacle to sweeping reforms lies at the head of their party — Gov. Ned Lamont.

The governor, a wealthy Greenwich businessman, defeated a Democratic proposal during his first year in office to impose an income tax surcharge on the capital gains earnings of the state’s wealthiest people, and consistently has argued that higher taxes on top earners would drive them to move out of state.

Connecticut ranks above nearly all states in terms of both income and wealth inequality. Wealth, which takes into account stocks, other investment holdings, property and debt, is even more concentrated at the top here than income.

Critics say Connecticut’s tax system, with its heavy reliance on municipal property taxes and a state sales tax, exacerbates this inequality. These levies are largely regressive, meaning the rates are the same regardless of the taxpayers’ wealth. And many businesses can transfer their tax burdens onto consumers, also disproportionately harming the low-income households.

The working poor in Connecticut pay nearly one-quarter of their earnings to cover state and local taxes, or to cover business taxes shifted onto their households, according to a 2014 state tax analysis. The middle class pay about 13%, while the top 10% of earners pay 10% and the top 1% pay almost 7.5%.

Advocates for progressive state and local tax reform argue increased public sensitivity toward systemic racism make now the right time for legislative action. They attribute this awareness both to the disproportionate toll the coronavirus pandemic has taken on communities of color as well as the May 25 killing of George Floyd by Minneapolis police.

But McGee said that while his caucus is committed to mobilize “a growing commitment to systemic change” among legislators, leaders also realize the planned July special session offers a limited “window of opportunity” for change.

After the news conference, McGee said the caucus was still discussing potential progressive tax proposals they could float in a special session, perhaps after the July session, which will be focused on policing and voting access.

“As you can imagine, there are a lot of moving pieces to this,” McGee said. “I really believe that we will have ‘Part Two’ of special session, and (tax reform ) is a part of our long list of items that we want to support.”

Opinion This is not my dad’s deal

My father recently died after being very ill for several months. As one does, I’ve taken to thinking about his life. In many ways he had a very ordinary and stable life, but one that feels increasingly improbable for so many of us now.

Opinion Fear of walnuts and other scary things

The other day while I was raking leaves beneath our black walnut tree — and picking up scads of fallen walnuts— guess what happened? Ker-plunk! Took one right on the melon. Add them to the list of things to fear, or at least be wary of. Are you worried about sharks? Forget about them! Sharks kill a measly 10 humans a year worldwide.