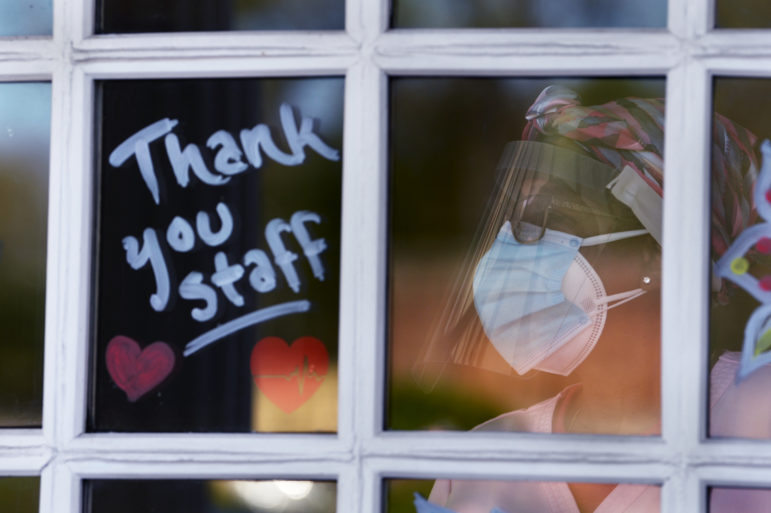 A health care worker at Kimberly Hall North watches through a window as supporters show their appreciation to workers at the skilled nursing facility.

The state’s largest nursing home association is calling for Connecticut to double its emergency bed network for elderly COVID-19 patients in anticipation of a second coronavirus wave this fall.

The Connecticut Association of Healthcare Facilities, which represents 145 homes, also urged Gov. Ned Lamont’s administration to pump more than $300 million extra  into the state’s 213 nursing homes this fiscal year to maintain care levels in the face of eroding revenues.

But while state health officials agreed with the association’s call to reserve as many as 1,200 beds for potentially infected elderly residents, Lamont’s budget office was noncommittal about additional funding.

“We believe that our best chance of keeping COVID-19 out of our general nursing home population and other congregate settings is starting the planning process now for establishing the alternative recovery center bed capacity that we will need,” association Chairman Lawrence G. Santilli, who heads the Athena Health Care Systems nursing home chain, wrote recently to Lamont.

State health officials, who reviewed Santilli’s proposal Wednesday before Connecticut’s Nursing Home Financial Advisory Committee, agreed with the association’s call — both for advanced planning, and on a larger scale.

“These are conversations that are happening right now and obviously we are working with the industry,” Department of Public Health spokesman Av Harris told The Connecticut Mirror on Thursday.

During the peak of the pandemic in Connecticut in April, the Lamont administration and the industry scrambled to establish six locations — with just over 600 beds in total — to treat elderly patients with COVID-19 away from the rest of the nursing home population.

State health and industry officials both praised the program for helping to contain the coronavirus’ spread among one of the state’s most vulnerable populations.

“I am now working to identify additional nursing home operators to assist in standing up a portion of the needed beds,” Santilli wrote, adding that, if necessary, the Athena chain would provide all 1,200 beds.

The COVID-19 recovery sites established this past spring involved three types of facilities.

Two locations — one in Sharon and one in Bridgeport — involved existing nursing homes. Uninfected residents were relocated, temporarily, so these homes could be used exclusively to treat residents with the coronavirus.

The state also reopened nursing home campuses that had just recently been shut down in Torrington and Meriden to create two more care centers exclusively for infected residents.

And the final two sites involved nursing homes in East Hartford and Wallingford that each had distinct wings — with separate entrances and staffs — that could be designated only for coronavirus patients.

Harris said health officials are reviewing all of these models to determine what would work best for an expanded safety net system this fall. But he said one goal, if possible, is to minimize the number of uninfected residents that would have to be transferred to isolate those with COVID-19.

“There are many complicating health factors that can be quite disruptive when you have to move these people,”  Harris added.

Finances not so easy

But the administration and the industry have farther to go to reach common ground in the area of finances.

The state Office of Policy and Management, Lamont’s budget agency, granted homes a 10% Medicaid rate increase in March as the pandemic arrived. Medicaid covers the cost of roughly 70 percent of all nursing home care provided in Connecticut.

In April the administration bumped that increase to 15%. And in May and June, Lamont used a portion of Connecticut’s federal Coronavirus Relief Fund allocation to give homes an effective 20% Medicaid increase each month.

Before the fiscal year had ended, the industry had received $52 million from these increases. The administration also set aside more than $70 million in federal dollars for hardship rate increases that homes can apply for — on a facility-by-facility basis — to handle unanticipated costs including overtime, protective gear and equipment replacement.

But Santilli wrote that “while the federal and state support provided to date has been a lifeline during the pandemic, Connecticut nursing homes will need further help to recover from the low occupancy and dramatic revenue losses caused by the pandemic.”

But because of the pandemic, short-term residents — who normally are housed two-persons-to-one-room, must be kept separate as a precaution against coronavirus spread. That has cut this source of revenue at least in half.

And industry officials say the drop is even greater, since many patients are postponing hip and knee surgeries during the pandemic if possible.

The association estimates overall nursing home occupancy is down about 20%.

Santilli projected nursing homes would need a 25% Medicaid rate increase, or aid from some other source of a matching amount, to preserve services this fiscal year, which began July 1. Connecticut typically spends about $1.2 billion annually on nursing home care, which would put Santilli’s request at about $300 million.

The association also asked Lamont to postpone a quarterly provider tax payment the industry owes this month. This would cost the state between $35 million and $40 million in the short term, but Santilli proposed nursing homes would repay the funds within one year.

Lamont’s budget director, Office of Policy and Management Secretary Melissa McCaw, said “We have been and will remain engaged with the nursing homes about the financial impact of the COVID-19 pandemic and how we can help them through this crisis, while also impressing upon our federal delegation that additional support is needed from the federal government.”

McCaw noted that Connecticut also has provided resources to assist nursing homes with protective gear and testing of residents and staff.

Lamont and his top administrators have insisted repeatedly that it’s crucial for Congress to adopt a third major relief package for states to get the nation through additional waves of the coronavirus until a vaccine has been developed.

“The pandemic is not over,” Morelli said. “This crisis has placed financial stress on all nursing homes and all homes will be incurring additional testing, PPE [personal protection equipment] and other Covid-19 related expenses well beyond the current deadline for additional state funding and well past the date the state has agreed to pay for testing. We will need additional funding.”

But Morelli added that “we have been facing this crisis in partnership with the state and … we recognize that this is not just a Connecticut issue, this is a national issue and we appeal to the federal government to provide our state with the resources and funding that is needed not only by nursing homes, but by all aging service providers caring for the older adults who have been so severely impacted by this pandemic.”

Sen. Cathy Osten, D-Sprague, co-chairwoman of the General Assembly’s Appropriations Committee, said Lamont and state lawmakers “need to be part of a global discussion” about all health care providers in Connecticut and what they need to continue throughout the pandemic.

But Osten added that that conversation, which needs to happen soon, cannot involve only the prospect of more federal aid, but whether Connecticut should tap its budget reserves, which are projected at close to $2.4 billion.