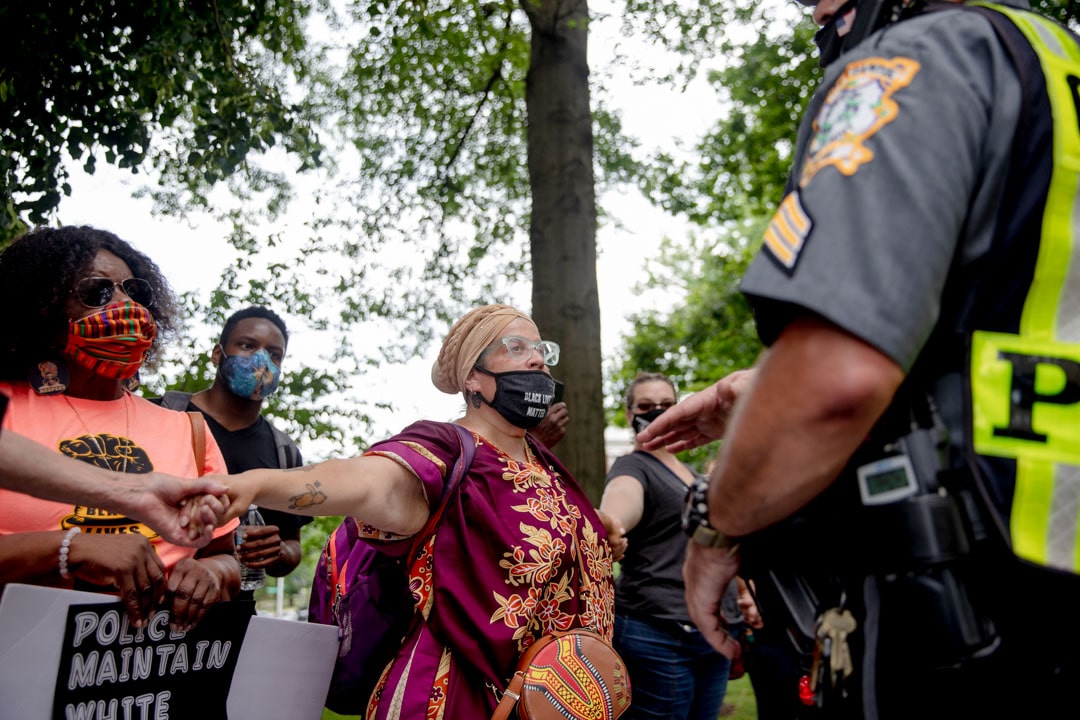 Protestors asking for racial justice in policing hold hands in front of police officers before the special session on Thursday at Connecticut State Capitol.

House Democratic leaders struggled Thursday to find a compromise capable of keeping its majority caucus united behind a sweeping police accountability bill, a measure whose passage appeared to turn on the degree to which it limits qualified immunity for police officers.

A day of behind-the-scenes negotiation ended at 10:30 p.m.,  setting the stage to begin an overnight debate without certainty about whether Democrats had the votes to keep the 46-section bill intact if an amendment is offered to remove the section limiting qualified immunity.

House Majority Leader Matt Ritter, D-Hartford, said he did not expect a vote before dawn on Friday.

Qualified immunity is legally complex and politically divisive. Twelve hours before debate opened, angry police officers chanted outside the State Capitol that stripping them of that protection would be a betrayal to peace officers, while members of Black Lives Matter insist it was a necessary check on the worst of the police profession.

Sen. Gary Winfield, D-New Haven, the co-chair of the Judiciary Committee and a prominent member of the legislature’s Black and Puerto Rican Caucus, said he and other backers of the bill were struggling over whether they still would vote for the bill if the qualified immunity language was removed, even though it contains other substantial reforms.

“This implicates history, the big history, in a way that a lot of the other stuff doesn’t,” Winfield said. “This is naked. There  is no mistaking that history is implicated here, so it’s rough. It’s a rough decision for people to have to make.” 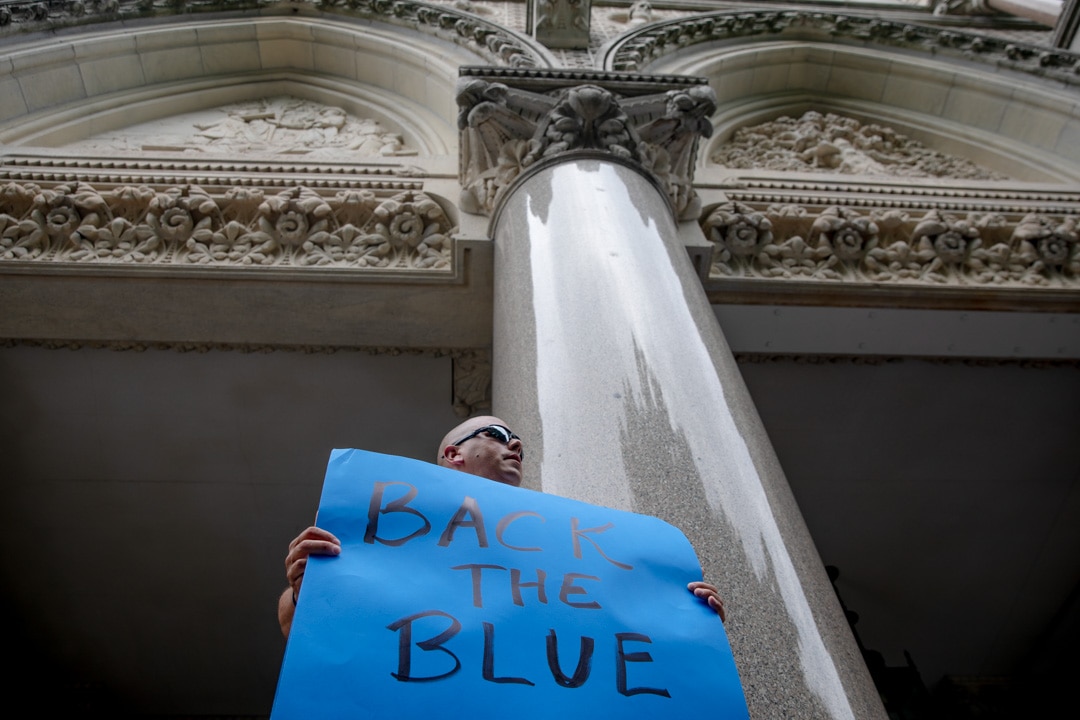 A police supporter on the steps of the Connecticut State Capitol as the special legislative session kicked off Thursday.

On the east steps outside the Capitol, Sgt. John Castiline, the president of the Connecticut State Police Union, told a crowd of off-duty police officers that no one opposes removing unqualified officers from the profession, but the bill as drafted is  harmful to all cops, not just the bad ones.

“If you vote yes for this legislation as one of our legislators,” Castiline said, his voice amplified, “in my opinion, you can only be one of two things. You’re either a cop hater, or you’re brain dead.”

If you vote yes for this legislation as one of our legislators, in my opinion, you can only be one of two things. You’re either a cop hater, or you’re brain dead.”— Sgt. John Castiline, President, Connecticut State Police Union

On duty Capitol and Hartford police officers stood between a small group of Black Lives Matter activists and the larger contingent of off-duty cops and their supporters, most dressed in matching black or white shirts. Members of SEIU 1199, a union representing health care workers, occupied their own corner of the Capitol lawn.

Mike Oretade, a pre-school teacher who is a leader of Black Lives Matter in the Hartford region, said limiting immunity will be a useful check on police power. 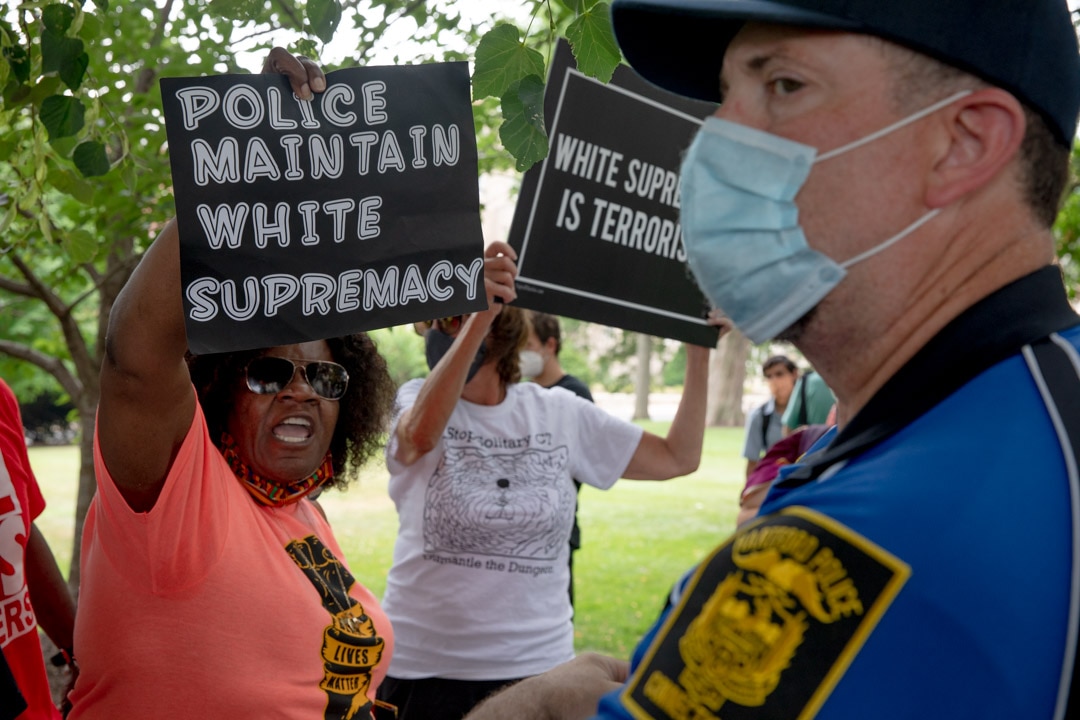 Barbara Fair, left, said a police officer pushed her 17-year-old granddaughter at a protest for no reason.

Winfield hosted an emotional Facebook Live session earlier Thursday. Tears rolled down his cheeks as he talked about his struggle to make the state safer for Black and brown residents, and the times his life has been threatened for that work. He recalled how, in the closing minutes of last week’s public hearing, his son climbed onto his lap as he marked the end of the 12-hour listening session.

“While I know what this world is and what they can run into when they go out of the house, they certainly shouldn’t have to worry about the people who are supposed to be there to protect them, and neither should your children,” Winfield said of his kids.

He stressed that the bill was not just about police killing citizens they are sworn to protect, or disproportionately inflicting violence and trauma upon minorities and their communities. “This fight is about the power we have given them, and how we have allowed them to use that power,” he said. “This fight is about every single time that they use that power not for us, but against us.”

Legislators continued to work on the bill hours throughout the day. The main sticking point is the section that would create a new legal path in state court for people to file lawsuits against police who violate their rights. Currently, police can often avoid liability for actions if there is no state law or court decision that prohibits them from acting as they did. In other words, civil lawsuits in state courts are often dismissed because there are no state statutes that lay out how they are required to handle a particular situation.

Police officers have protested en masse, claiming the end of governmental, or qualified, immunity in state courts would make police unable, or unwilling, to do their jobs. They warned that officers would second-guess decisions in situations where they need to act quickly, and that those who could leave or retire from the profession, would. They also said it would hinder recruitment efforts, potentially undercutting another section of the bill that attempts to draw more people of color into police forces across the state. 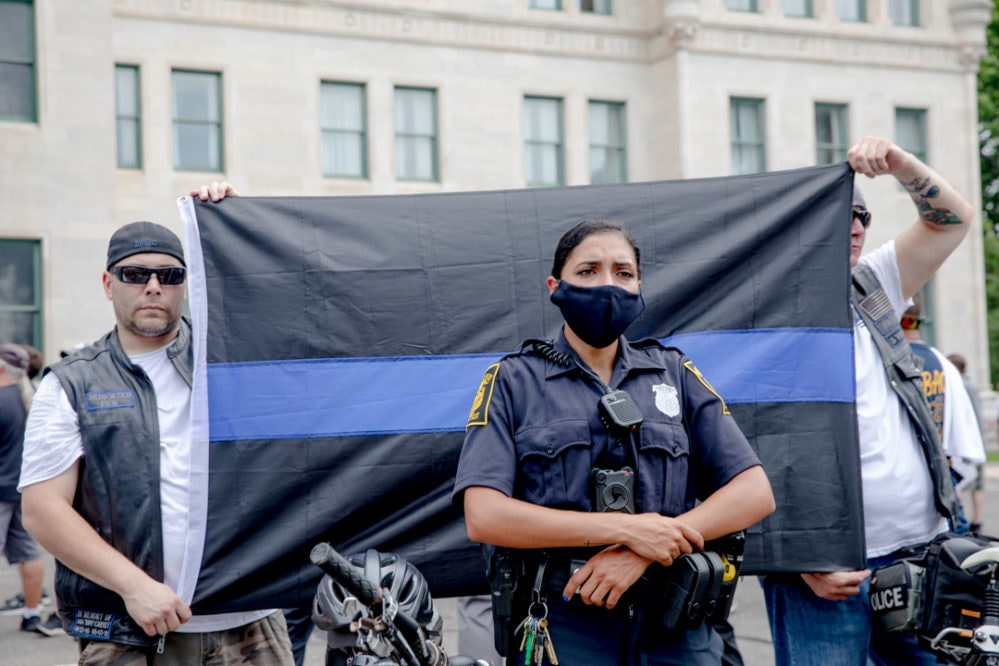 The Council of Small Towns warned Thursday that ending qualified immunity for police officers would expose municipal leaders to significant personal liability, leading to an increase in municipal insurance costs. Betsy Gara, COST’s executive director, said municipalities throughout the state are already struggling to fund important services because of COVID-19 and are anticipating a significant decline in property tax and other revenue because of high unemployment and business closures.

“By opening up municipal employers to significant liability and insurance costs, this bill will force increases in property taxes and/or deep cuts in critical services,” Gara said. “This will undermine the efforts of our towns to position their communities for social and economic recovery following the pandemic.”

COST recommended lawmakers remove the provision from the bill so the issue can be addressed in a way that doesn’t overburden municipalities and taxpayers.

Advocates, meanwhile, argued that ending immunity would help families affected by police violence and provide a means for them to be compensated for their loss. They also said the potential for hefty lawsuits could discourage police departments from keeping on their payrolls those officers who routinely commit misconduct. If officers don’t violate people’s rights, one longtime community activist said during the bill’s public hearing, they’ll have nothing to worry about.

Winfield told Facebook Live viewers to gear up for a long fight Thursday. He urged people to contact their lawmakers, to show up at the Capitol to show their support for the bill, to keep their comments as substantive and strong as possible. 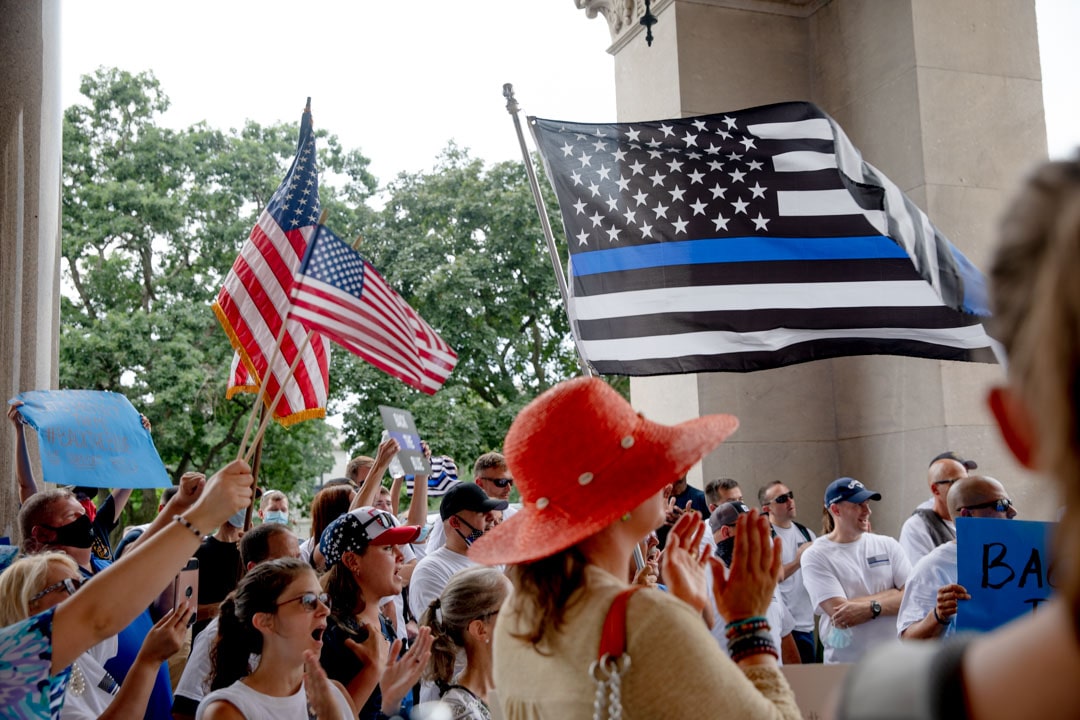 “Back the Blue” protestors gather outside the State Capitol Thursday.

Even without qualified immunity, the bill is still a robust set of reforms, Gov. Ned Lamont said Thursday morning. He pointed to a section of the bill that would allow the Police Officer Standards and Training Council to revoke an officer’s certification if they use excessive physical force or if they do something that “undermines public confidence in law enforcement.”

“There’s a way that those cops who have crossed the bounds and shouldn’t be cops anymore can be taken off the force and made sure they can’t work elsewhere in the state of Connecticut,” Lamont said. “I’ve got to do everything I can to give people confidence that our good cops are good cops and the overwhelming majority are great cops — and if there are some that ought to be reprimanded and kicked off the force that there’s a way to do that. And we can do that with or without qualified immunity.”

The bill also narrows the circumstances in which police officers can use chokeholds or use deadly force, gives cities and towns’ civilian review boards subpoena power so they can hold officers accountable for misconduct, and creates an inspector general position that would investigate deaths in police custody — and decide whether to prosecute them.

Winfield said even if the bill passes in as strong of a form as the draft, there’s more work to be done. Other battles, like those for more equitable housing and education systems, still remain.

“You say ‘Black Lives Matter but you don’t want us living near you,'” Winfield said. “When this is over, the fight still continues.”