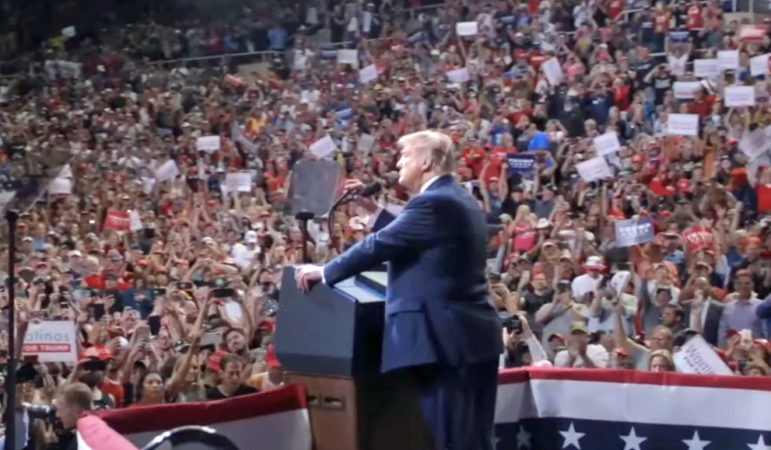 Pre sident Donald Trump at one of his large, pre-virus, rallies.

This year, President Donald Trump’s reelection campaign filed defamation lawsuits against three of the country’s most prominent news outlets: The New York Times, The Washington Post and CNN. Then it filed another suit against a somewhat lower-profile news organization: northern Wisconsin’s WJFW-TV, which serves the 134th-largest market in the country.

The Trump campaign sued the station over what it claims is a false and defamatory ad WJFW aired that showed Trump downplaying the threat of the coronavirus as a line tracking new COVID-19 infections ticks up and up on the screen.

Dozens of stations ran the ad. But the Trump campaign chose to sue just NBC-affiliate WJFW, which is owned by a relatively small company that only has two other local TV stations, both in Bangor, Maine. The campaign did not initially sue the political organization that produced the ad. That group later joined the case as a defendant.

The curious lawsuit is part of a larger, aggressive and exceedingly expensive legal operation by the Trump campaign that’s the focus of our latest “Trump, Inc.” podcast.

The campaign has spent over $16 million on litigation and other legal costs — more than any past presidential campaign and more than 10 times what presumptive Democratic nominee Joe Biden has spent on legal services, according to disclosures.

Trump has long boasted about his penchant for filing lawsuits. The president and his businesses have reportedly filed over 2,000 lawsuits. After losing a 2006 defamation lawsuit against the journalist Tim O’Brien, Trump told the Post that he knew he couldn’t win, but he sued anyway. “I spent a couple of bucks on legal fees, and they spent a whole lot more,” Trump said. “I did it to make his life miserable, which I’m happy about.”

As with other areas, Trump has taken his approach to running his personal life and business to the presidency.

Multiple media law experts told us that the suit against tiny WJFW has little chance of succeeding. Susan Seager, a media defense lawyer and adjunct professor at The University of California, Irvine, School of Law, said, “The courts are very deferential and very protective of opinions about public figures and political issues.”

So if Trump isn’t likely to win, what might he be trying to do? Matthew Sanderson, who served as counsel for Sens. John McCain and Mitt Romney, said he thinks the Trump campaign is “engaging in scare tactics.”

“The reason in my opinion that the Trump campaign is filing these types of lawsuits is not necessarily to punish the Wisconsin station — they’re not going to be successful,” Sanderson said. “The reason they’re doing this is to send a message to the rest of the stations to be careful” about running anti-Trump ads.

Unlike many other states, Wisconsin doesn’t have a law that makes complainants pay for defendants’ legal costs if a defamation suit ends up being dismissed as frivolous.

Seager estimates that fighting a defamation lawsuit brought by a high-profile group like the Trump campaign could cost anywhere from $100,000 to $250,000, just to go through the process of getting it dismissed.

We asked the Trump campaign and its lawyers about the suit and why they chose WJFW. They did not respond.

The TV station commented, through a lawyer, that “WJFW has no choice but to fight the Trump campaign’s attempt to bully a small-market broadcaster into surrendering its First Amendment rights. The public counts on local broadcasters, especially in an election year, to remain free to air criticisms of public officials.”

Of course, one critical difference between lawsuits Trump used to file in his business dealings and the ones his campaign is filing is that Trump no longer has to use his own money. His donors are picking up the tab.

Trump’s disclosures show his campaign has paid about $200,000 to the firm handling the Wisconsin case.

The campaign has also paid $3.3 million to the firm of attorney Charles Harder, who specializes in high-profile reputation defense lawsuits. Harder is representing the Trump campaign in the three other defamation suits against media organizations. Harder is perhaps best known as the lawyer who successfully sued Gawker into bankruptcy on Hulk Hogan’s behalf while being surreptitiously funded by venture capitalist Peter Thiel.

Another set of expenses in the disclosures is also interesting. It shows the Trump campaign spent $95,161 on “legal & IT consulting” paid to … “The Trump Corporation.” Neither the campaign nor Trump’s company responded to questions about those charges.