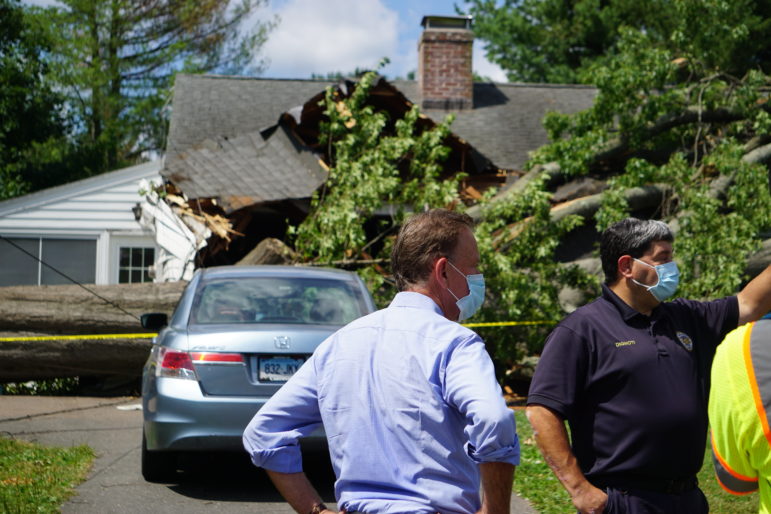 Gov.Ned Lamont inspects damage to a home partly crushed by an uprooted oak in Wethersfield. At right is the fire marshal and deputy chief, Anthony Dignoti

The chair of the Public Utilities Regulatory Authority says that Eversource Energy badly underestimated the threat of Tropical Storm Isaias by preparing for between 125,000 and 380,000 outages, while more than 800,000 of its customers lost power at the peak and nearly 600,000 still were in the dark Wednesday night.

PURA is opening an investigation of Eversource and the state’s other power company, United Illuminating, at the request of Gov. Ned Lamont, said Marissa P. Gillett, the chair of the regulatory authority. Gillett spoke to reporters outside Eversource offices in Berlin after Lamont, Gillett and others met with the utility’s top leaders.

Gillett said preparation plans filed by UI and Eversource showed that UI accurately projected the the storm’s threat, while Eversource, which serves customers in 149 of the state’s 169 cities and towns, did not. Lamont said he was not happy with Eversource’s preparation or sense of “urgency” about restoring services, though he said his immediate focus was on seeing most customers get power back by the end of the week.

Katie Dykes, the commissioner of energy and environmental protection, said the administration wants PURA to examine what Eversource has done with ratepayer money to harden its infrastructure, hire sufficient staff and pre-stage extra crews in advance of the storm.

“This is their job. This is what they do. They are a reliability infrastructure company. And what we pay them to do in our rates is to be prepared for an event like this — and especially when you are in the middle of a pandemic,” said Dykes, who was chair of PURA for three years before becoming Lamont’s commissioner of energy and environmental protection in 2019.

Craig Hallstrom, the president of regional electric operations for Eversource, appeared with Lamont, but he left before Gillett and Dykes made their comments to a smaller group of reporters after the formal news conference ended.  Jim Judge, the chairman, president and chief executive, participated in the private briefing but did not meet with reporters.

Documents provided by PURA show that UI informed regulators it was declaring the coming storm a “level 3 event,” which anticipates that 30% to 50% of UI customers would be affected, with outages that could last five days or more. Eversource prepared for a milder  “level 4 event,” which anticipates 10% to 29% of customers affected, with outages lasting two to six days.

Later, Eversource issued a statement defending and explaining its preparations:

“As a storm approaches, we engage a variety of different resources – including UConn’s predictive model and experts from outside weather services – to track the storm and forecast its severity and path. Based on the tools and guidance we received from our external experts, we followed our plan and filed for the appropriate level of classification. From the time we declared our initial level based on our best available tracking models at the end of last week, the storm’s path deviated from those models and we’ve reclassified the storm accordingly as our models dictated, which is a typical utility practice once a storm hits.”

Hallstrom said 450 line crews and 235 tree crews were at work, a number that would double in the next 24 hours as out-of-state crews arrive. About 250 of the 450 line crews were Eversource employees based in Connecticut, while the others were contractors who regularly work for the utility.

“We fully understand the magnitude of this event,” he said.

The utility said Wednesday night that power had been restored to more than 215,000 customers. About 46% of its customers were without power, compared to 25% of UI’s . UI serves 17 communities, including Bridgeport and New Haven.

An initial assessment by Eversource found damage at 14,475  locations, including 214 broken poles, 90 damaged transformers, and 1,400 spans of downed wire. Nearly 1,000 trees will have to be cleared.

The PURA investigation comes nearly a decade after legislators and regulators examined the the capabilities and response of the two utilities to two storms in 2011, Tropical Storm Irene in August and a freak snowstorm on Oct. 29. The chief operating officer of Connecticut Light & Power, which later became part of Eversource, resigned that November.

“Several years ago, Connecticut experienced large-scale outages that took days to recover from, and we were told that the utilities were improving their resources so that they can be prepared for the next time Mother Nature inevitably hits again,” Lamont said in a statement issued by his office. “And now here we are, with a wholly inadequate response to another storm. I’m asking PURA to begin this investigation so that we can determine whether the companies are meeting their legal obligations and whether any penalties need to be applied. The people of Connecticut deserve better than the service they are receiving.”

Lamont, whose standing has soared during the COVID-19 pandemic, pivoted Wednesday to the prospect of a prolonged blackout in the heat and humidity of mid-summer.

Tropical Storm Isaias’ brief but violent sprint through Connecticut on Tuesday left residential and business customers without power, making Lamont the proxy for consumers eager to know when they can expect light and air conditioning. 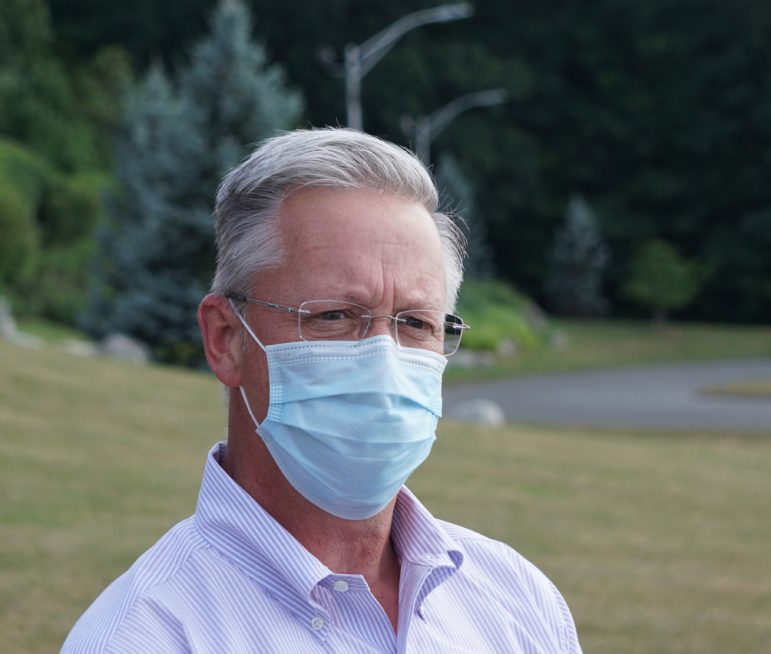 Craig Hallstrom addresses the media. He was the only speaker who did not remove his mask when speaking.

Hallstrom offered no explanation of why a storm that arrived in Connecticut with less than hurricane winds was so destructive. He said the damage assessment was continuing, but he expected the storm to rank as the second-worst for outages, more than the 500,000 the company experienced in Super Storm Sandy.

Earlier, outside the town hall in Wethersfield during a tour of storm damage in central Connecticut, the governor waved off questions about the preparedness of the two public utilities for a wind storm that caused what Lamont said then was  likely to be the state’s third-largest power outage. Ultimately, he said later, it may rank higher.

“Rather than do a debrief on what went wrong, we’re going to make sure we make things right for next three or four days — then we’ll have plenty of time for what ifs,” Lamont said.

But Sen. Norm Needleman, D-Essex, who co-chairs of the Energy and Technology Committee, pressed Eversource for more details about the personnel assigned to restoring power to Connecticut. In a plan published in February by PURA, Eversource listed 719 “restoration line resources,” including 5 directors, 127 managers and supervisors, 362 overhead line workers and 225 “other craft workers.”

It seems illogical, Needleman said, that Tropical Storm Isaias, despite winds that exceeded 60 mph at times, could have caused so many outages in just five hours.

“How did that lead to one of the worst outages in the history of Connecticut?” Needleman said.

The Essex lawmaker said he fears the utility has not maintained sufficient line support and other maintenance staff in Connecticut in recent years, instead relying on temporarily shifting crews from its affiliates in New Hampshire and Massachusetts when necessary — or by relying on mutual aid from utilities in other states.

Hallstrom said the staff was sufficient. 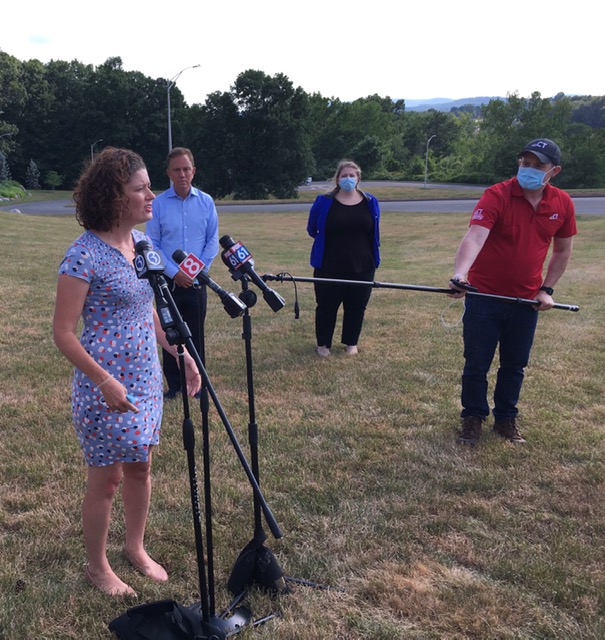 Lamont said he spoke by phone to the top executives of both utilities earlier about the recovery, and that more than 1,000 crews are working on restoration, with help coming from out of state.

Eversource, the state’s largest provider of electricity, already is the target of consumer ire over a rate hike and sharply higher electric bills while people are home during the pandemic, and because of past responses to weather events. Eversource also serves Massachusetts and New Hampshire.

The utility, then called Northeast Utilities, merged in 2012 with Boston-based NSTAR and was rebranded Eversource Energy. It faced intense criticism after Tropical Storm Irene and the October nor’easter  led to hundreds of thousands of outages and prolonged blackouts, more than10 days in some areas.

State legislators and a panel commissioned by then-Gov. Dannel P. Malloy particularly chided the utility at that time for under-investing in tree-trimming work in the first decade of the 2000s. NU and United Illuminating countered that state utility regulators allowed this level of tree-trimming work to occur in exchange for limiting electric rate increases. 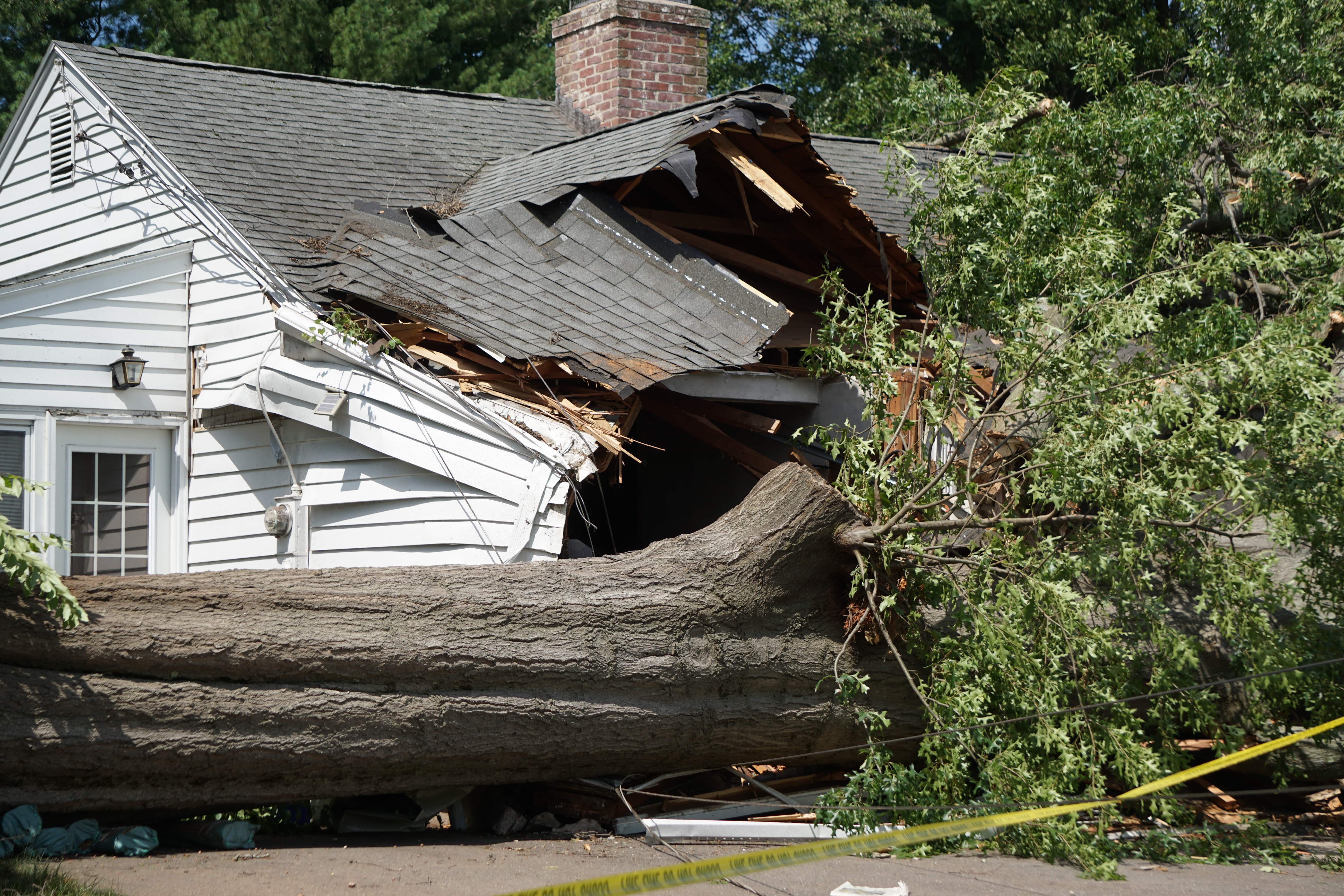 This house on Olney Road in Wethersfield was on Lamont’s damage tour.

The long tail of those policies was clear Wednesday, as Lamont and Michael Rell, Wethersfield’s Republican mayor, viewed storm damage, including an apartment building that lost its roof and a small post-war Cape nearly crushed by a massive oak uprooted in the storm.

“Wethersfield is pretty resilient. We had a tornado in 2009. The governor at that time, I called her up and said, ‘Hey, mom, you want to come down here?’” Rell said.

“Your mom sent me a nice note the other day,” Lamont said.