Eversource was on a victory lap. Then came Isaias 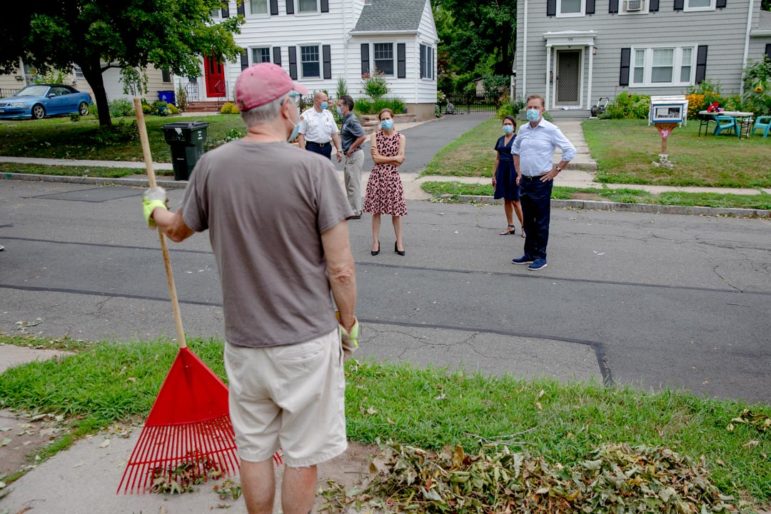 Gov. Ned Lamont told Dave Lynch, who had no power in West Hartford, that help was on the way. Or so he’s told by Eversource.

Eversource Energy’s chairman and chief executive, Jim Judge, was jubilant in a message to shareholders in March. Based on returns to investors and a seeming newfound immunity to protracted blackouts, Judge assured them the company was coming off its “most successful year ever.”

The Eversource board agreed, paying Judge a $3 million bonus that swelled his compensation for the year to $19.8 million. Shareholders didn’t object. The stock price had soared from $65.04 to $85.07, a gain of 31% over 12 months. And the reliability of the company’s electric distribution system was in the industry’s top 10%.

“Our overall electric system reliability performance in 2019 improved by 26 percent; customer power interruptions were on average 21.6 months apart,” Judge wrote in a shareholder message sent two months before their annual meeting in May.

That streak ended spectacularly Tuesday, with the lights going out on more than 800,000 Eversource customers in Connecticut during Tropical Storm Isaias. That was  quickly followed by accusations of a failure to prepare and regulators opening an investigation into the staffing and procedures of  Connecticut’s dominant provider of electricity, as well as the smaller United Illuminating.

On Friday morning, one-third of Eversource customers were without power, and a full restoration was not expected until Tuesday. United Illuminating, which serves Bridgeport, New Haven and 15 smaller communities, reported 15% of its customers were out.

As was the case nearly a decade ago when two tropical storms and a nor’easter left many residents without power for more than a week, the lack of communication by the two monopolies is an issue.

“There has been a significant failure in communication here, leaving upward of 800,000 Eversource customers without even a clear way to report an outage from the outset of the storm event,” said Marissa P. Gillett, the chair of the Public Utilities Regulatory Authority. “There are disturbing reports emerging about the coordination, or lack thereof, between our electric utilities and the communities which they serve. This is simply unacceptable.”

Judge has been publicly silent in the face of complaints about Eversource’s performance. He met privately with the governor on Wednesday, then declined to join him facing reporters waiting on the lawn outside Eversource’s hilltop offices in the Hartford suburb of Berlin on Wednesday. Instead, he dispatched a lieutenant, generally seen as a faux pas in crisis communication.

“My counsel to my clients is that the more serious the situation, the higher level of person you want to be speaking for the company,” said Gene Sheehan, a public-relations consultant.

And when the governor is talking to the press on your lawn, the CEO’s absence can be interpreted as a dismissiveness, he said.

Judge and the governor spoke again Thursday by telephone.

The company announced Thursday night it had restored power to more than 435,000 customers, but 485,000 still were in the dark. Earlier, Lamont toured West Hartford, a community where more than half of Eversource customers lost power Tuesday and 43% still were out Friday morning.

Eversource was the subject of sarcasm.

“Oh, well, I can’t wait until they get here,” Lynch said.

At Lamont’s urging, the Public Utilities Regulatory Authority opened an investigation into the preparation for and response to the widespread blackouts by Eversource and United Illuminating — news that broke on Eversource’s lawn. The two regulated utilities have geographic monopolies for the distribution of electricity.

New to the job, Gillett is promising an aggressive review.

“Since moving to Connecticut last year to take the helm of PURA, I’ve heard the utilities tout significant investments in grid hardening and vegetation management made at the ratepayers’ expense over the past decade,” Gillett said in a statement. “Frankly, I am deeply disappointed in seeing this play out in real time. Utilities are in the business of delivering reliable service, and the public should know that I’m not interested in their excuses. This is fresh off the heels of PURA’s announcement last week about our investigation into the pending rate increase requests. The utilities will be afforded their day in court before PURA, but the governor did not recruit me to Connecticut to serve as a passive observer.”

Eversource is the product of a merger of Northeast Utilities in Connecticut and NSTAR in Massachusetts. It is now New England’s largest energy delivery system, with subsidiaries that provide electricity, natural gas and water to 4 million customers in Connecticut, Massachusetts and New Hampshire.

With Judge out of the public eye, the company’s defense has been left to Craig Hallstrom, the president of regional electric operations. Hallstrom appeared briefly with Lamont on the lawn Wednesday, then spoke to reporters again Thursday.

Hallstrom said he is the appropriate official to tell Eversource’s story. Aside from overseeing electric operations, Hallstrom also is in charge of disaster preparedness and response.

He is unapologetic about Eversource’s performance. 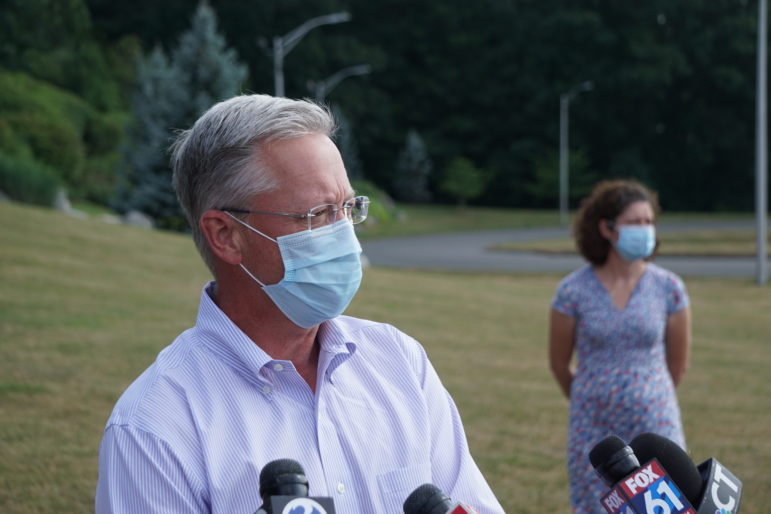 Craig Hallstrom of Eversource and Katie Dykes, the commissioner of DEEP.

“I think we were ready,” Hallstrom said in an interview. “With all our tools, we made a decision what the storm was most likely going to do. The rest is history. It’s a lot bigger than we thought it was, probably what a lot of people thought it was.”

The threat assessment dictates how many emergency crews, many from out of state, Eversource will pay to stand by. Some out-of-state crews arrived Thursday, with others expected from Illinois, Missouri, Wisconsin, Ohio, Indiana, North Caroline, Maryland and New York.

“By the end of tomorrow, we will have just as many crews as we would have had we declared a level 3,” Hallstrom said.

PURA will be looking at staffing, among other things. Mike Zappone, the man in charge of bringing in out-of-state crews to restore power after major outages, had retired at least a month ago, and his job still was vacant two months into the hurricane season.

“He’s helping us here today. We had him back. He has a lot of contacts,” Hallstrom said.

But he downplayed the vacancy.

“There are more people than just him” responsible for hiring out-of-state crews though mutual aid arrangements with other utilities, he said.

Ultimately, ratepayers bear the cost of hiring crews to stand by, as well as keeping them on the payroll for as long as it takes to restore power. Hallstrom said Eversource could err on the side of overstaffing, saving itself from criticism.

“No one would ever be able to accuse me of not being ready — but that’s not financially responsible to anybody,” he said.

Since Tropical Storm Irene and a freak snowstorm caused massive outages in 2011, followed by Superstorm Sandy in 2012, Hallstrom said the company has amassed a good record for restoring power after storms.

“I probably sound a little defensive, but this stuff bothers me,” Hallstrom said. “I have people, including myself, we put so much energy and effort into doing the right thing for our customers. It’s tough when someone says you didn’t do the right thing, looking backwards.”

Hallstrom said about 633,000 customers were out at the peak, but the total outages topped 800,000, because some customers lost power as others were regaining it. By any metric, he said, it was one of the largest blackouts to ever hit Connecticut.

But he said the dissection of Eversource’s performance is premature.

“I’ll be honest with you. I had 600,000 customers out on my system,” Hallstrom said. “It’s not really the time to argue about whether we did a good job or a bad job. Plus, it’s not over, right?”

Eversource and United Illuminating failed to fully prepare for and respond to Tropical Storm Isaias last year, according to state utility regulators who reduced the companies’ ability to recoup costs.