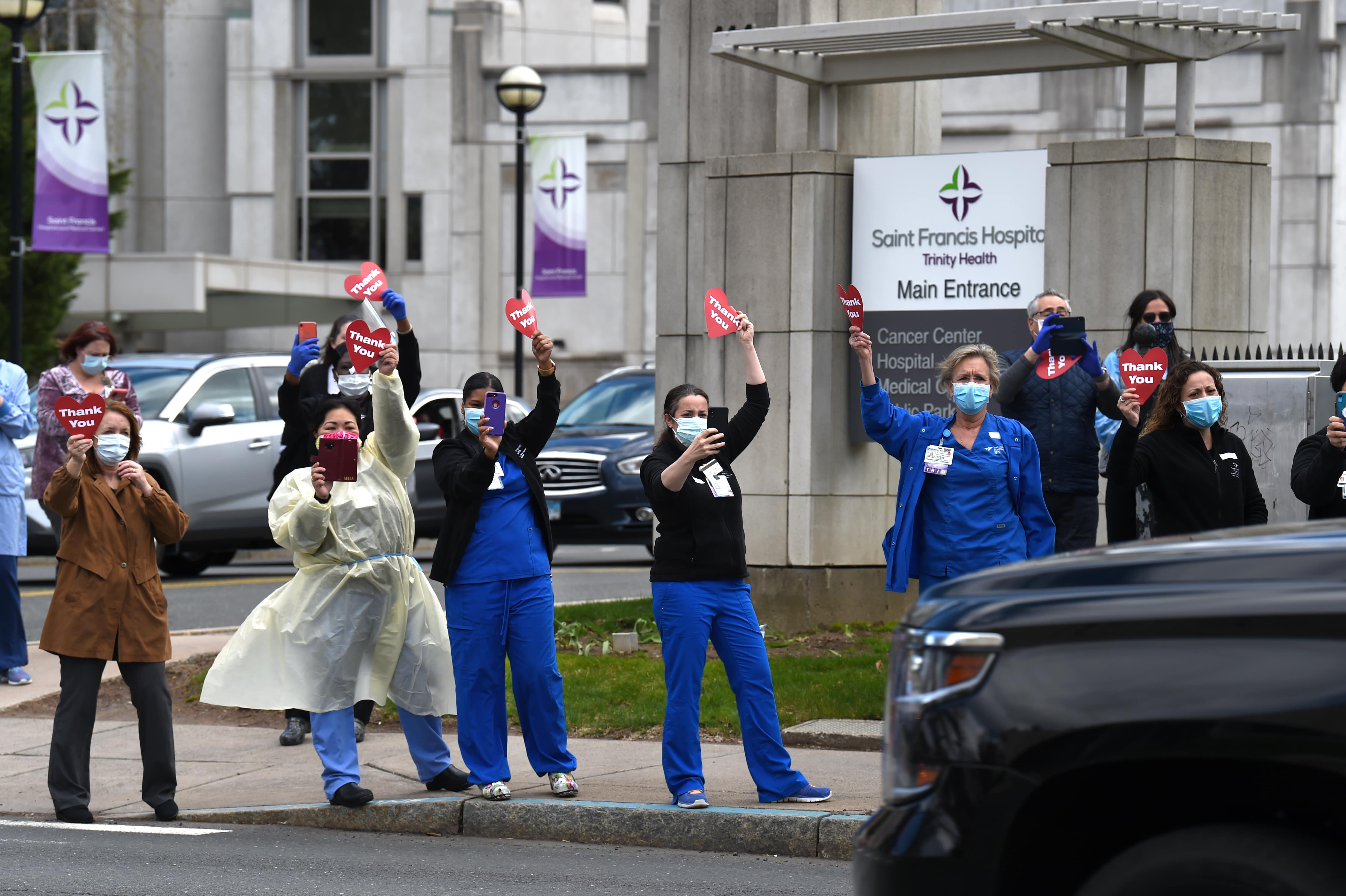 Health care workers at St. Francis Hospital who are on the front lines caring for patients with COVID-19 cheer and wave as a parade of first responders passes by to pay tribute to them.

Health care workers of color were more likely to care for patients with suspected or confirmed COVID-19, more likely to report using inadequate or reused protective gear, and nearly twice as likely as white colleagues to test positive for the coronavirus, a new study from Harvard Medical School researchers found.

The study also showed that health care workers are at least three times more likely than the general public to report a positive COVID test, with risks rising for workers treating COVID patients.

Dr. Andrew Chan, a senior author and an epidemiologist at Massachusetts General Hospital, said the study further highlights the problem of structural racism, this time reflected in the front-line roles and personal protective equipment provided to people of color.

“If you think to yourself, ‘Health care workers should be on equal footing in the workplace,’ our study really showed that’s definitely not the case,” said Chan, who is also a professor at Harvard Medical School.

The study was based on data from more than 2 million COVID Symptom Study app users in the U.S. and the United Kingdom from March 24 through April 23. The study, done with researchers from King’s College London, was published in the journal The Lancet Public Health.

They include Roger Liddell, 64, a Black hospital supply manager in Michigan, who sought but was denied an N95 respirator when his work required him to go into COVID-positive patients’ rooms, according to his labor union. Sandra Oldfield, 53, a Latina, worked at a California hospital where workers sought N95s as well. She was wearing a less-protective surgical mask when she cared for a COVID-positive patient before she got the virus and died.

The study findings follow other research showing that minority health care workers are likely to care for minority patients in their own communities, often in facilities with fewer resources, said Dr. Utibe Essien, a physician and assistant professor of medicine with the University of Pittsburgh.

Those workers may also see a higher share of sick patients, as federal data shows minority patients were disproportionately testing positive and being hospitalized with the virus, Essien said.

“I’m not surprised by these findings,” he said, “but I’m disappointed by the result.”

Dr. Fola May, a UCLA physician and researcher, said the study also reflects the fact that Black and Latino health care workers may live – or visit family – in minority communities that are hardest-hit by the pandemic because so many work on the front lines of all industries.

The study showed that health care workers of color were five times more likely than the general population to test positive for COVID-19.

Their workplace experience also diverged from that of whites alone. The study found that workers of color were 20% more likely than white workers to care for suspected or confirmed-positive COVID patients. The rate went up to 30% for Black workers specifically.

Black and Latino people overall have been three times as likely as whites to get the virus, a New York Times analysis of Centers for Disease Control and Prevention data shows. (Latinos can be of any race or combination of races.)

Health care workers of color were also more likely to report inadequate or reused PPE, at a rate 50% higher than what white workers reported. For Latinos, the rate was double that of white workers.

“It’s upsetting,” said Fiana Tulip, the daughter of a Texas respiratory therapist who died of COVID-19 on July 4. Tulip said her mother, Isabelle Papadimitriou, a Latina, told her stories of facing discrimination over the years.

Jim Mangia, chief executive of St. John’s Well Child and Family Center in south Los Angeles, said his clinics care for low-income people, mostly of color. They were testing about 600 people a day and seeing a 30% positive test rate in June and July. He said they saw high positive rates at nursing homes where a mobile clinic did testing.

He said seven full-time workers scoured the U.S. and globe to secure PPE for his staff, at one point getting a shipment of N95 respirators two days before they would have run out. “It was literally touch-and-go,” he said.

The study said reuse could pose a risk of self-contamination or breakdown of materials, but noted that the findings are from March and April, before widespread efforts to decontaminate used PPE.