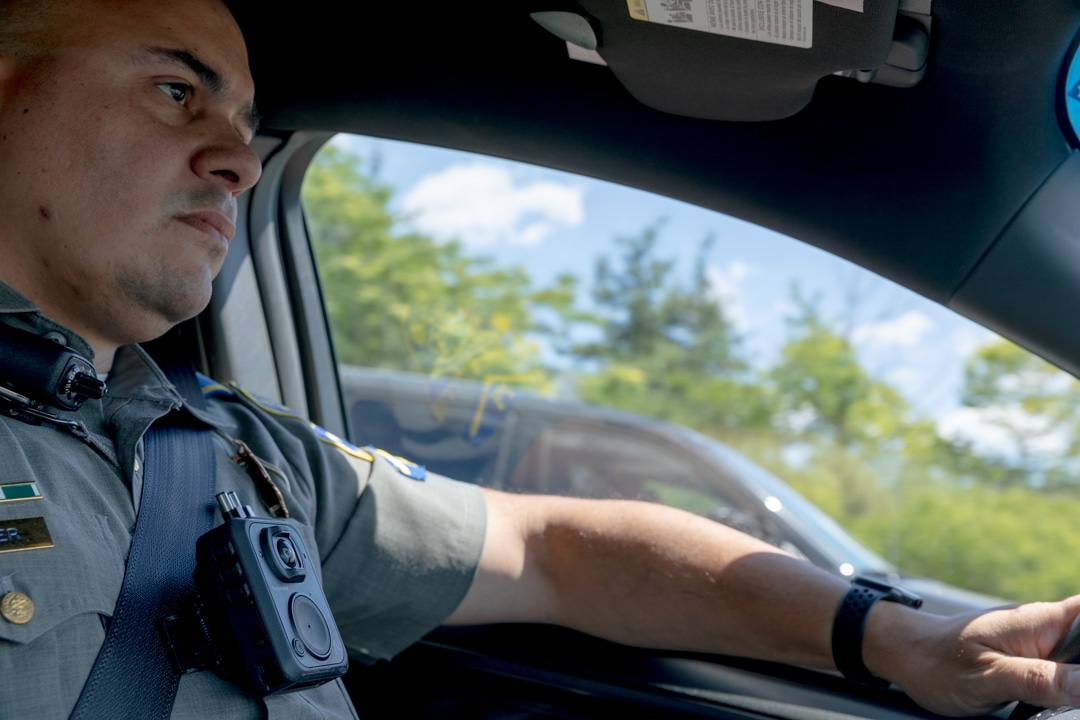 Robert Hunter wears a body camera during his routine patrol on highway in Hartford on Tuesday, July 21. “I like having it,” Hunter said. “You know it’s there. People you deal with know it’s there. So it’s one of those tools that you’ll also like to have as something to deescalate the situation before it gets out of hand.”

The Connecticut State Police Union sued the state Tuesday over the portion of the new police accountability law that contradicts their current contract by making some internal reports subject to open records laws.

The contract, which is valid until 2022, protects against the release of information in a trooper’s personnel file when the officer thinks disclosing it would be an invasion of privacy. It also holds that internal affairs investigations that are dropped or deemed unfounded cannot be released.

The bill Gov. Ned Lamont signed into law at the end of last month overrides this section of the union’s collective bargaining agreement, allowing for disclosure of the documents under the state’s Freedom of Information Act. Disciplinary matters and alleged misconduct, even if deemed unsustained or unfounded, can be publicly disclosed, the law says.

The union says in the lawsuit that there are already pending Freedom of Information requests for personnel files and internal affairs investigations, and that the law enforcement officials will “suffer immediate and irreparable harm” if that information is released.

In his written testimony outlining his concerns with the bill, Andrew Matthews, the union’s executive director, said the union and state agreed on this language in their contract due to the “significant increase” in anonymous false complaints in recent years, which have the potential to “unjustifiably cause damage to a trooper’s reputation, character and livelihood.”

The suit, which alleges that the new law violates the U.S. Constitution’s contractual protections, is attempting to get an injunction to prohibit the release of reports when internal affairs clears a trooper, or finds the claim is unfounded, in line with the current contract.

The case could be risky for the union, as it has the potential to set a legal precedent that would allow legislators to tinker with other contractual agreements in the future.

“It’s not a gamble to us,” Matthews said, because, after all, that’s what lawmakers already did when they passed the police accountability bill.

“What it is telling other unions in Connecticut is the very people who say they support collective bargaining and will protect it, actually don’t,” Matthews said, arguing that the new law suggests legislators will strip parts of contractual agreements as they see fit.

“Though challenges to legislation occur time to time, it is unfortunate to see that our State Police Union has decided to take this course of action,” responded Rep. Steven Stafstrom, D-Bridgeport and co-chair of the Judiciary Committee, in a statement.

“As a public servant I will always stand with policies that seek transparency and support the people’s right to know about incidents and would hope that those in law enforcement feel the same,” Stafstrom said. “While I don’t see much of a case backing up their claims in this suit, I pledge to continue to join with the departments and officers willing to work with us to implement the changes in the bill to rebuild trust between officers and the communities they serve.“

A spokesperson for the Attorney General’s Office said they are reviewing the complaint and will respond in court.