Tom Gilmer is leading, despite an arrest and promise to quit 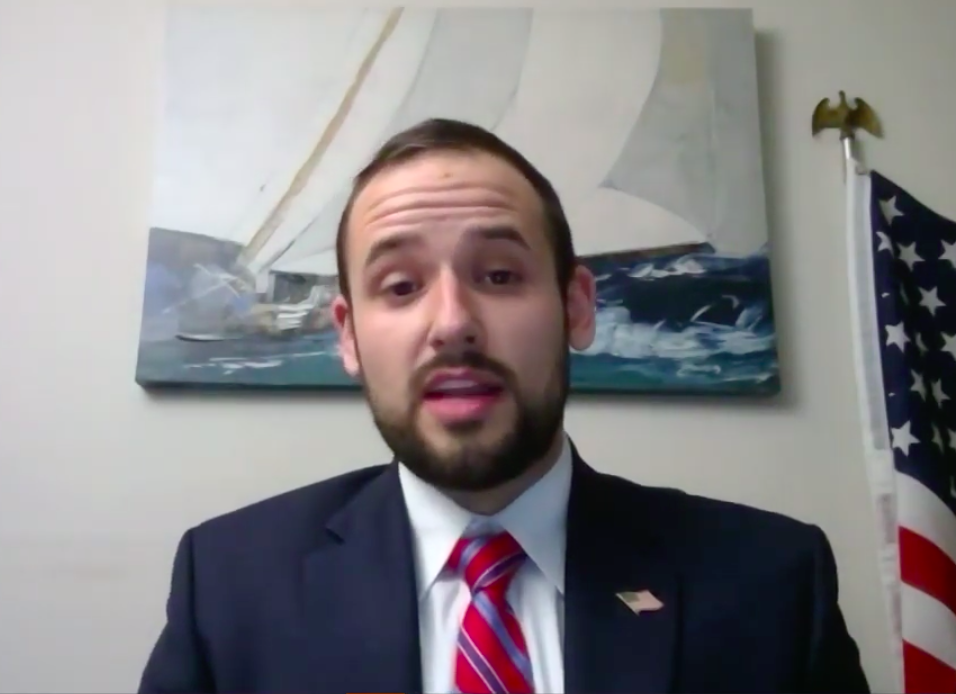 Thomas Gilmer, on a video conference, accepting the endorsement of the Republican Party in May.

A misbegotten run for Congress by a young man with no base, no money and no chance of winning has drawn the leadership of a struggling Connecticut Republican Party into a drama over what to do about a candidate who still may win the primary after his arrest and withdrawal this week.

It’s more complicated than one might imagine. Thomas Gilmer, 29, announced he was quitting the race as the polls opened Tuesday — the morning after his arrest on felony charges related to an assault of a former girlfriend in 2017. His announcement resolved nothing, however.

His opponent, Justin Anderson, will not automatically get the nomination should Gilmer win and then formally withdraw, as promised. The vacancy would be filled by the Republican State Central Committee, where Anderson’s behavior also has been called into question.

At issue is what Anderson says is a video recording of a portion of the assault given to him by the victim, his use of the video in a vain attempt to force Gilmer from the race, and whether the GOP’s state chair, J.R. Romano, should have been more aggressive in confronting Gilmer.

“It’s a problem for the party — a big problem,” said former U.S. Rep. Rob Simmons, the last Republican to win the 2nd Congressional seat sought by Anderson and Gilmer. “This undermines the confidence we have to have in the state party.” 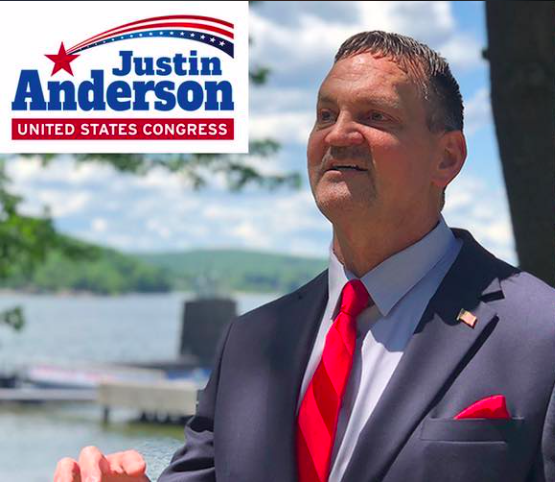 Justin Anderson says he should get the nomination if Tom Gilmer wins and withdraws.

On Thursday night, with results from mailed-in absentee ballots still being posted, Gilmer led Anderson, 9,225 to 9,199.

The damaging elements of the story for the Republican Party are numerous. At a minimum, the GOP’s inability to attract anyone other than two political neophytes to compete for a congressional nomination is a measure of how far and how fast the party has fallen.

Until the mid-term election of 2006, Republicans owned three of the state’s five congressional seats. But Simmons and Nancy Johnson, the dean of the delegation, lost that night. Chris Shays lost two years later, leaving the GOP without a congressman in New England.

More damaging is any suggestion that the Republican Party was less-than-aggressive in investigating an allegation of domestic violence. The party is struggling to close a gender gap that’s widened during the presidency of Donald J. Trump.

Recent polls show Trump trailing badly to Joe Biden among all women, and Trump’s lead among non-college-educated white women, who favored him by 26 points over Hillary Clinton in 2016, has shrunk to 6 points.

Anderson, 49, is a retired correction officer with a second career in the Connecticut National Guard, rising to the rank of lieutenant colonel. He says that Gilmer’s former girlfriend gave him a video that captured a portion of an assault by Gilmer.

Wethersfield police charged Gilmer Monday with first-degree unlawful restraint and second-degree strangulation. On Tuesday he announced his withdrawal from the race, asserting a need to defend himself from mud-slinging by Anderson.

“Unfortunately, my primary opponent focused on slinging mud, without regard to the truth,” he said. “Now, I find myself in the position where I must put my family and our shared Republican values before my own interests. I cannot, in good conscience, move forward in this campaign while I am simultaneously forced to clear my name. And, clear my name I will.”

Anderson said he brought the video to Romano before the nominating convention in May and told him that it depicted Gilmer attacking a woman. He said Romano declined to watch it, but urged he or the victim take it to the police

“He said she should go public, go to the police,” Anderson said. “I don’t want it to sound like he blew it off.”

“I basically confronted him with the allegations, and he flatly denied them,” Romano said.

Romano said his options were limited given the circumstances: He had an allegation from one candidate about another, and neither Anderson nor the woman would go public with the story. Anderson wanted him to oust Gilmer without playing a public role.

“It’s like saying, ‘Hey, I have a murder weapon. Do you want to see it?’ If you have evidence of a crime, I don’t need to see it,” Romano said. “Bring it to the police and let them figure it out.”

Simmons, who unseated Democrat Sam Gejdenson in 2000 and was re-elected twice before losing to Joe Courtney in 2006, said Romano had a duty to press further.

“His job is to confront the candidate and to say, ‘You’re out, pal,’ ” Simmons said. “This is pathetic. It’s just pathetic.”

Gilmer came to New England from Ohio, a salesman assigned to Rhode Island by an Ohio commercial roofing company, Tremco.

According to a lawsuit he filed in December, Gilmer was living and working in Rhode Island in the summer of 2018 when Garland, a competing roofing company from Ohio, recruited him to take over an eastern Connecticut sales territory.

Gilmer had a one-year non-compete agreement with Tremco, but he agreed to make the move, living off savings and part-time work. He said in his lawsuit that he made clear to Garland he was politically active as a Republican interested in running for Congress.

In June 2019, Gilmer and his fiancee, moved into a home he purchased in Madison. A month later, he started with Garland, and his fiancee got pregnant. He filed papers opening a congressional campaign in August, subsidized by $15,000 of his own money.

He was asked in a candidate questionnaire if experience was beneficial.

“Never hurts. I think however today the people really want someone representing them that understands this nation is ‘We the people’ not ‘We the party.'”

As for the most important characteristics for an elected official?

“Integrity,” he replied. “Work hard and be honest with yourself, and your constituents.”

Gilmer says he was abruptly fired in mid-September over his political activities. He sued Garland in December. The campaign continued, and he won the Republican convention endorsement in May, easily beating Anderson.

Neither candidate had significant resources.

Despite his scant resources, Anderson said he is ready to go forward. If Gilmer wins and then withdraws, he expects the Republican Party to give him the vacancy.

“It’d be nice if they stand behind us,” he said.

Courtney’s last opponent garnered only 33% of the vote, and the congressman was sitting on $1 million in campaign cash to start July. Anderson acknowledges Courtney’s advantages, including his popularity in the district. Courtney himself is less of an issue than the Democratic Party.

“The problem is he is following the Democratic playbook, if you will,” Anderson said.