Source: Office of the Secretary of State. Unofficial data current as of Friday evening. Towns with missing data or 0 turnout – representing about 12 percent of towns in the state — do not appear on the chart. Toggle between the party buttons at the top to see the vote distribution by town. Credit: Kasturi Pananjady

Connecticut’s first election with universal access to absentee ballots reinforced what has been evident in public polling: At least in the midst of a COVID-19 pandemic, Democrats are far more comfortable than Republicans when it comes to voting without going to the polls.

Forty-two percent of Republicans voted by absentee in Tuesday’s primary, compared to 62% for Democrats. The absentee ballots were cast via the U.S. mail, whose role in the elections is now a matter of national debate, and by dropping them into secure boxes at town halls.

The successful use of absentee ballots in the primary, the result of Gov. Ned Lamont’s executive order to temporarily liberalize Connecticut’s restrictive rules, may be undercut by the U.S. Postal Service’s warnings against relying on the mail in November.

In a letter dated July 29 and made public this week, Thomas J. Marshall, general counsel for the Postal Service, warned Connecticut and most other states that “certain deadlines for requesting and casting mail-in ballots are incongruous with the Postal Service’s delivery standards.”

The warning comes amid cuts to the postal service and President Donald J. Trump’s attacks on voting by mail, even though the president and first lady recently applied for absentee ballots allowing them to vote by mail in Florida.

Merrill mailed absentee ballot applications to every voter eligible to vote Tuesday for the nominations of presidential candidates and, in some locations nominations for congress and the General Assembly.

Use varied widely, with fewer  than 20% of Republicans voting by absentee in small eastern Connecticut towns, while more than 60% used them in Greenwich and 70% in the Hartford suburb of Bloomfield, which has a large retirement community.The highest use by Democrats was in Ellington, near Hartford, and in Southbury. It is the home of Heritage Village, the largest community in New England geared to retirees.

The state used a mail house to send the applications and later the ballots, but voters complained of ballots that arrived late or not at all. Merrill has not decided if the state will play the same role in November, or return the responsibility to local clerks and registrars.

Chuck Catania, a GOP operative in the 2nd Congressional District, said he suspects that the reluctance by some Republicans to use absentee ballots is the product of a general distrust in government and the president’s repeated cautions. 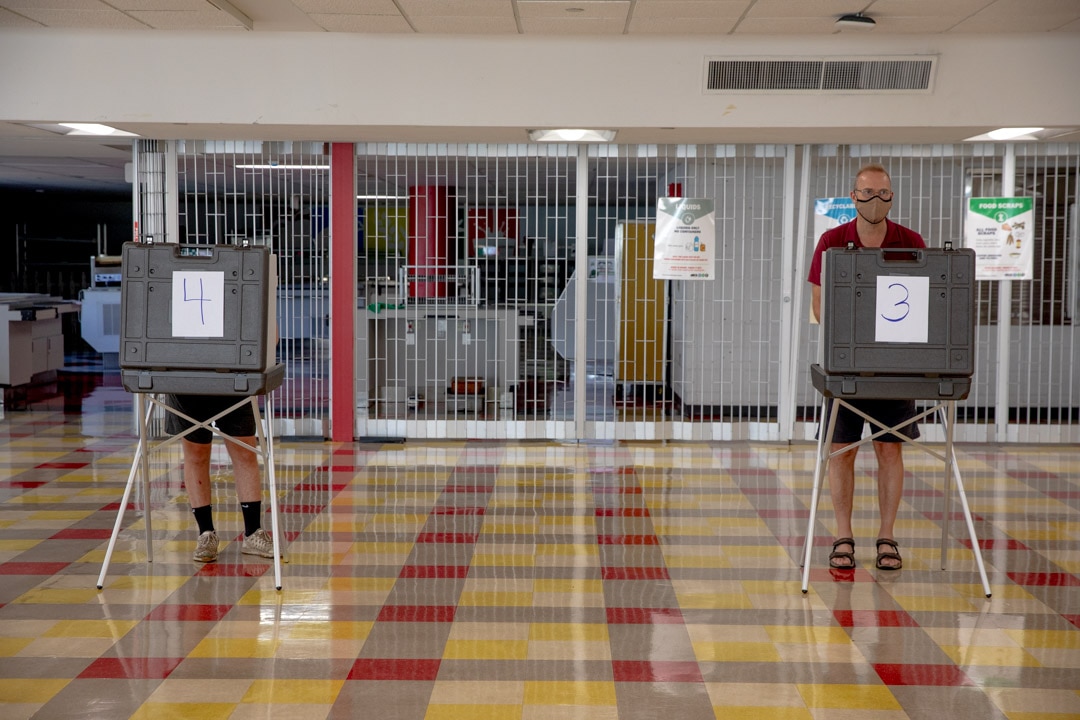 Unlike the president, Catania does not see the more liberalized use of absentee ballots as an invitation to fraud.

J.R. Romano, the state Republican chair, who has warned of the potential of fraud in the past, said he saw the lower use of absentee ballots by Republicans as simply a desire to ensure their votes are counted.

“I think there is a reliability issue. The further you take your vote away from voting in person, something can go wrong,” Romano said. “I think for Republians, they want to make sure their votes are counted at all cost.”

A Survey USA poll in May showed partisan differences in Connecticut about absentee voting.

About 90% of Democrats supported the no-excuse use of absentee ballots, compared to 51% of Republicans. The margins were similar when asked if local officials should have to notify voters if they make a mistake that would cause their ballot not to be counted.

Senate Minority Leader Len Fasano, R-North Haven, a critic of Merrill’s handling of the absentee ballot process, said he does not see fraud as a major issue, though he believes Connecticut needs to modernize its systems if the temporary change becomes permanent.

“Then we have to commit to the public to spend money and move out of the stone age,” Fasano said.  He doubts that the current system allows local officials to catch double voting.

Local clerks now record the receipt of every absentee ballot in a statewide computer system, then print out a voter list used at the polls to make sure no one votes by absentee and in person.

Gabe Rosenberg, a spokesman for Merrill, said the system protects against double voting even in cases when an absentee ballot arrives on election day. At the end of the day, an absentee ballot is not opened if it was cast by a voter recorded as also voting at the polls, he said.

The General Assembly is expected to vote in the 2021 session to place a proposed constitutional amendment on the ballot that would allow the legislature to permit early voting and the no-excuse use of absentee ballots.

Lamont’s executive order for the primary broadened the definition of sickness to include concern about the pandemic. A law passed in special session makes the same change for November. In both cases, every voter could obtain an absentee ballot without meeting one of the limited conditions in the constitution and state law.

The legislature voted last year to place a constitutional amendment allowing early voting on the ballot, but unanimous Republican opposition in the Senate blocked the super-majority necessary to immediately place the measure before the voters.

Without a three-quarters majority in each chamber, the amendment must be passed by two successive legislatures. If the legislature passes it again next year, the question would go on the ballot in 2022.

Sen. Mae Flexer, D-Windham, the co-chair of the Government Administration and Elections Commission, said the primary has demonstrated that elections can be conducted in Connecticut with the substantial use of absentee ballots.

She said she was encouraged that 40% of Republicans voted by absentee, perhaps a sign to GOP lawmakers that their constituents have faith in the system.

“Maybe we finally can get enough support so this can be a permanent thing,” Flexer said. “Hopefully, it’ll be less partisan.”