Back to the future: Trump’s history of promising a health plan that never comes 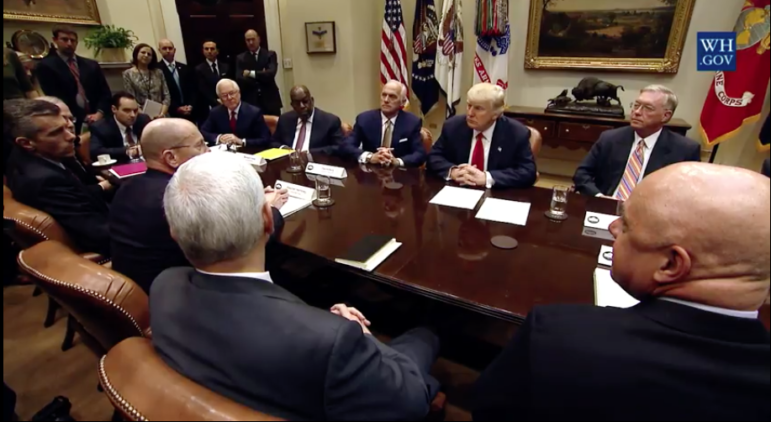 Ever since he was a presidential candidate, President Donald Trump has been promising the American people a “terrific,” “phenomenal” and “fantastic” new health care plan to replace the Affordable Care Act.

But, in the 3½ years since he set up shop in the Oval Office, he has yet to deliver.

In his early days on the campaign trail, circa 2015, he said on CNN he would repeal Obamacare and replace it with “something terrific,” and on Sean Hannity’s radio show he said the replacement would be “something great.” Fast-forward to 2020. Trump has promised an Obamacare replacement plan five times so far this year. And the plan is always said to be just a few weeks away.

The United States is also in the grips of the COVID-19 pandemic, which has resulted in more than 163,000 U.S. deaths. KFF estimates that 27 million Americans could potentially lose their employer-sponsored insurance and become uninsured following their job loss due to the pandemic. (KHN is an editorially independent program of the Kaiser Family Foundation.) All of this makes health care a hot topic during the 2020 election.

This record is by no means a comprehensive list, but here are some of the many instances when Trump promised a new health plan was coming soon.

Trump tweeted in February that he would immediately repeal and replace Obamacare and that his plan would save money and result in better health care.

By March, a blueprint, “Healthcare Reform to Make America Great Again,” was posted on his campaign website. It echoed popular GOP talking points but was skimpy on details.

During his speech accepting the Republican nomination in July, Trump again promised to repeal Obamacare and alluded to ways his replacement would be better. And, by October, Trump promised that within his first 100 days in office he would repeal and replace Obamacare. During his final week of campaigning, he suggested asking Congress to come in for a special session to repeal the health care law quickly.

Trump told The Washington Post in a January interview that he was close to completing his health care plan and that he wanted to provide “insurance for everybody.”

He tweeted Feb. 17 that while Democrats were delaying Senate confirmation of Tom Price, his pick to lead the Department of Health and Human Services, the “repeal and replacement of ObamaCare is moving fast!”

And, on Feb. 28, in his joint address to Congress, Trump discussed his vision for replacing Obamacare. “The way to make health insurance available to everyone is to lower the cost of health insurance, and that is what we are going to do,” he said.

House Republicans, with backing from the White House, were the ones to introduce new health legislation, the American Health Care Act (AHCA). The repeal-and-replace bill kept in place some of the more popular provisions of the ACA. Some conservative Republicans said the bill didn’t go far enough, deriding it as “Obamacare Lite” and refusing to vote on it.

On March 9, Trump tweeted, “Despite what you hear in the press, healthcare is coming along great. We are talking to many groups and it will end in a beautiful picture!”

Later that month, as efforts to pass the AHCA continued to stall, Trump updated his earlier promise.

“And I never said — I guess I’m here, what, 64 days? I never said repeal and replace Obamacare. You’ve all heard my speeches. I never said repeal it and replace it within 64 days. I have a long time,” said Trump in his remarks from the Oval Office on March 24. (Which was true; he had said within 100 days.) “But I want to have a great health care bill and plan, and we will. It will happen. And it won’t be in the very distant future.”

April and May: A roller-coaster ride of legislation and celebration, then …

After an intraparty dust-up, the House narrowly passed the AHCA on May 4. Despite tepid support in the Republican-controlled Senate, Trump convened a Rose Garden celebratory event to mark the House’s passage, saying he felt “so confident” about the measure. He also congratulated Republican lawmakers on what he termed “a great plan” and “incredibly well-crafted.”

Nonetheless, Senate Republicans first advanced their own replacement bill, the Better Care Reconciliation Act, but ultimately voted on a “skinny repeal” that would have eliminated the employer mandate and given broad authority to states to repeal sections of the ACA. It failed to gain passage when Sen. John McCain (R-Ariz.) gave it a historic thumbs-down in the wee hours of July 28.

September and October: Moving on … but not

Trump began September by signaling in a series of tweets that he was moving on from health reform.

But on Oct. 12, he signed an executive order allowing for health care plans to be sold that don’t meet the regulatory standards set up in the Affordable Care Act. The next day, Trump tweeted, “ObamaCare is a broken mess. Piece by piece we will now begin the process of giving America the great HealthCare it deserves!”

Roughly two weeks later, on Oct. 29, Trump got back to the promise with this tweet: “… we will … have great Healthcare soon after Tax Cuts!”

March and April: A moving target

It seems that 2018 was a quiet time — at least for presidential promises regarding a soon-to-be-unveiled health plan. It was reported that conservative groups were working on an Obamacare replacement plan. But in 2019, Trump again took up the health plan mantle with this March 26 tweet: “The Republican Party will become ‘The Party of Healthcare!’” Two days later, in remarks to reporters before boarding Marine One, Trump said that “we’re working on a plan now,” but again updated the timeline, saying, “There’s no very great rush from the standpoint” because he was waiting on the court decision for Obamacare. This was a reference to Texas v. U.S., the lawsuit brought by a group of Republican governors to overturn the ACA. It is currently pending before the Supreme Court.

Backtracking from his earlier promises to repeal and replace Obamacare within his first 100 days in office, Trump on April 3 tweeted: “I was never planning a vote prior to the 2020 Election on the wonderful HealthCare package that some very talented people are now developing for me & the Republican Party. It will be on full display during the Election as a much better & less expensive alternative to ObamaCare…”

In an interview with ABC News, Trump again said a health care plan would be coming shortly.

“We’re going to produce phenomenal health care. And we already have the concept of the plan. And it’ll be much better health care,” Trump told George Stephanopoulos. When Stephanopoulos asked if he was going to tell people what the plan was, Trump responded: “Yeah, we’ll be announcing that in two months, maybe less.”

But then, timing again changed as Trump promised a sweeping health plan after the 2020 election. “If we win the House back, keep the Senate and keep the presidency, we’ll have a plan that blows away ObamaCare,” Trump said in a speech to the Faith and Freedom Coalition’s Road to the Majority conference.

He reiterated this post-2020 election pledge in a speech to Florida retirees. “If the Republicans take back the House, keep the Senate, keep the presidency — we’re gonna have a fantastic plan,” Trump said.

Trump told reporters that Republicans have a “great” health care plan. “You’ll have health care the likes of which you’ve never seen,” he said.

During a White House business session with governors, Trump commented on the Republican governors’ lawsuit to undo the ACA and whether protections for preexisting conditions would be lost: “If a law is overturned, that’s OK, because the new law’s going to have it in.”

During the signing of a proclamation to honor National Nurses Day, Trump again said Obamacare would be replaced “with great healthcare at a lesser price, and preexisting conditions will be included and you won’t have the individual mandate.”

With no sign of a plan yet, reporters asked Trump about it at a Florida event. Trump responded that a “very inclusive” health care plan was coming and “I’ll be signing it sometime very soon.”

Pushing the timeline once again, Trump said during a press briefing that the health care plan would be introduced “hopefully, prior to the end of the month.”

Citing his two-week timeline once again, Trump said during a press briefing that he would pursue a major executive order in the next two weeks “requiring health insurance companies to cover all preexisting conditions for all customers.” Trump also said that covering preexisting conditions had “never been done before,” despite the ACA provisions outlining protections for people who have preexisting conditions being among the law’s most popular components. The Trump administration has backed the effort to overturn the ACA — including these protections — now pending before the Supreme Court.

Just before publication, we asked the White House for more information regarding when exactly the plan might be unveiled. The press office did not respond to our request for comment.

This story first appeared Aug. 13, 2020, in Kaiser Health News (KHN), a national health policy news service. It is an editorially independent program of the Henry J. Kaiser Family Foundation which is not affiliated with Kaiser Permanente.