Health care and education suffer when there’s no internet access 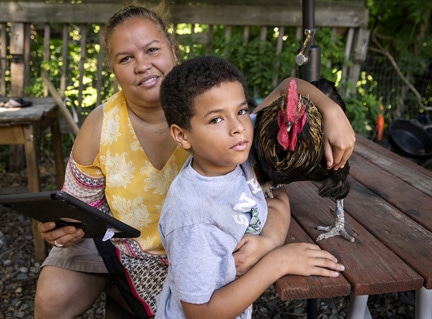 Susana Encarnacion of New London holds an iPad that the city supplied for her son, Jeremiah. Jeremiah is holding the family’s rooster, “Old Man.” The Encarnacions have no Wi-Fi or internet access in their home, beyond a phone hotspot, which made it difficult for them to conduct video talks with Jeremiah’s doctors or school tutors.

With no Wi-Fi or reliable internet access during the COVID-19 pandemic, Susana Encarnacion of New London had some trouble during doctors’ appointments for her 9-year-old son, Jeremiah, who has asthma and attention deficit disorder.

The stay-at-home mother, who moved to New London from the Dominican Republic 16 years ago, said she and her husband used to have Wi-Fi, but it became too expensive. Phone appointments worked fine, but video doctor visits with only a phone hotspot often weren’t reliable.

“There were issues with losing a connection in the middle of appointments,’’ she said in Spanish through an interpreter from the Hispanic Alliance of Southeastern Connecticut.

This summer, Gov. Ned Lamont and philanthropists have focused attention on Connecticut’s digital divide in access to online education. Still, health care leaders say the divide is causing a health crisis as well.

“It’s really an equity issue and a matter of public health if people can’t get access to telehealth,’’ said Allison Blake, the CEO of the Child and Family Agency of Southeastern Connecticut.

When schools closed in March, a large number of families with children in New London public schools had no internet access at home, said Jeanne Milstein, the city’s director of human services.

The school system quickly tackled the problem of remote learning, but the connectivity issue also limited many families’ access to health care and mental health care, she said.

“The digital divide has really exploded during the pandemic,’’ Milstein said. “The lack of internet and Wi-Fi has a tremendous impact on immigrants, communities of color, the poor, the elderly and those who are homeless.”

And it’s not just a problem in New London. The state Department of Education reports that 29,000, or 6%, of Connecticut students lack internet access at home. The rate is closer to 10% in the 10 lowest-performing districts, which includes New London.

In July, Lamont announced the $43.5 million “Everybody Learns Initiative,” which would provide 50,000 laptops, 200 free public Wi-Fi hotspots and a year of home internet access to 60,000 students.

The Connecticut Conference of Municipalities and Dalio Education are collaborating to tackle the issue statewide, and Dalio, the city of Hartford and the Hartford Foundation for Public Giving are planning a $3.8 million free Wi-Fi network throughout Hartford. New Haven and Stamford already have such networks blanketing their downtowns.

Cable companies have pitched in with free and low-cost internet access for low-income families during the pandemic, and Comcast opened 15 free hotspots throughout New London.

The FCC estimates that 21 million Americans lack access to reliable internet service. The Pew Research Center reports that 10% of American adults do not go online, with non-users more likely to be poor, Black, Hispanic, over 65 and living in rural or urban areas.

A recent study published in JAMA Internal Medicine found that in 2018, 1 in 4 Medicare recipients, or 15 million Americans, lacked a home computer with high-speed internet access or a smartphone with a wireless plan. The study found that this technology gap disproportionately impacts people of color, low-income individuals, and seniors.

Connecticut’s efforts to connect low-income families to the internet are happening as telehealth has expanded. The state and federal government increased reimbursement for telehealth for doctors during the pandemic, and the General Assembly in July extended telehealth coverage through March 2021 for people insured by Medicaid and private insurers. 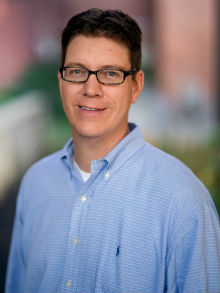 At Lawrence + Memorial Hospital in New London, patients have appreciated telemedicine visits with primary care physicians, endocrinologists and cancer doctors, said Dr. Kevin Torres, the hospital’s associate chief medical officer. Doctors were even able to check wounds by video to make sure they were healing, he said.

Torres said telehealth is likely here to stay. “I bet we will end up doing 30 to 40% of our visits through a teleconference once we’re through with all this,” he said.

During the last few months, each school offered free Wi-Fi in its parking lot for families to access remote learning, and the Child and Family Agency did the same to continue counseling children and teens by video conference. Some families even sat on the agency’s porch to tap into its Wi-Fi to speak to counselors by video.

The agency’s therapists were surprised that some teens on the autism spectrum or with anxiety were more responsive to video counseling than in-person visits, said Karen Ethier-Waring, Child and Family’s senior director of clinical services.

The video sessions helped many children dealing with sadness and anxiety over COVID-19 and fears about returning to school, but they were a challenge for therapists. “It’s not perfect,” Ethier-Waring said. “You almost have to pretend you’re in the same room to stay connected to the person.”

Encarnacion said she was grateful the school system provided Jeremiah, a third-grader, with an iPad, but her family’s unreliable internet caused him to fall behind in school.

“He didn’t do a lot of work because the internet was slow, and he doesn’t have a lot of patience,’’ said Encarnacion, who didn’t know about the free hotspots in the city.

Many of the city’s undocumented residents also lack Wi-Fi and have missed out on health and mental health care, said Migdalia Salas, the Hispanic Alliance’s vice president of programming. She phoned the cable companies to get Wi-Fi for several families whose immigration status made them afraid to call.

“They live in permanent fear of authorities,’’ she said.

This story was first published Aug. 14, 2020, by the Connecticut Health Investigative Team.