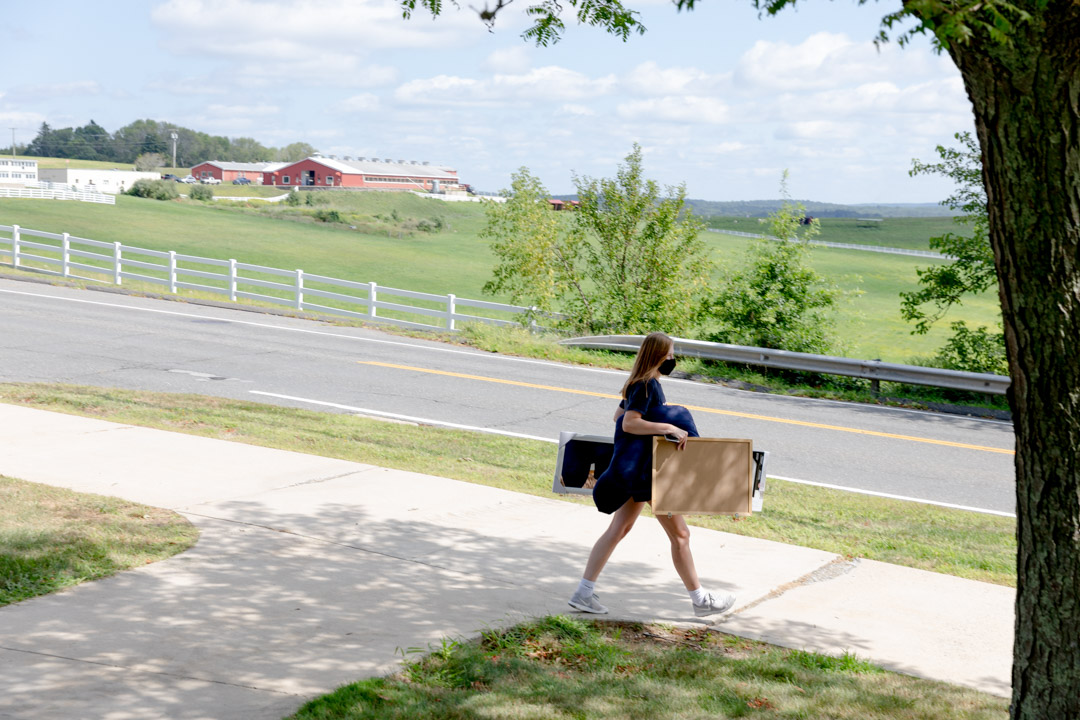 Lauren Walsh, a freshman from Woodbridge, carries her belongings into her UConn dorm on Aug. 17.

UConn officials on Friday said the school is potentially facing the most dire financial situation in its history, and warned that an existing $74 million budget deficit could skyrocket if the university is forced to shut down again because of the pandemic.

“UConn and UConn health are now facing their largest budget shortfalls in the university’s 130-year history,” UConn President Tom Katsouleas told lawmakers. “Our response, including the cuts that we’ve been making, are reflective of a challenge of that magnitude.”

UConn has come up with $48 million in budget adjustments to lower the deficit, but said it needs the state to cover the remaining $26 million shortfall. If the university is forced to close early again, officials said, that request for support could increase to $56 million.

The university said it would lower the deficit through furloughs, freezing spending, delaying hiring, and making university-wide program cuts. Katsouleas said the school is not considering layoffs at this time, but will not be renewing short-term contracts.

The budget deficit is largely the result of the university not getting enough revenue from student housing, administrators said.

UConn dramatically reduced the number of people living on campus this semester. The Storrs campus, which usually houses more than 12,000 students, is now home to 5,000 due to the pandemic. University officials said they achieved this reduction, in part, by not offering housing to out-of-state students who are taking classes remotely.

Although housing numbers dropped, UConn expects to surpass the 6,425 undergraduates they expected to enroll this semester by nearly 200. Katsouleas said most of the revenue loss is on the housing and dining side and that the net revenue loss from tuition is close to zero.

Nathan Fuerst, UConn’s vice president of enrollment, said the makeup of the student body “is very consistent with what we’ve seen in the past.”

UConn Health, separate from the state’s flagship university, is also projecting massive deficits due to COVID-19 but the facility was facing fiscal problems before the pandemic hit.

UConn Health said it will need $76.9 million to balance its budget through the end of fiscal year 2021.