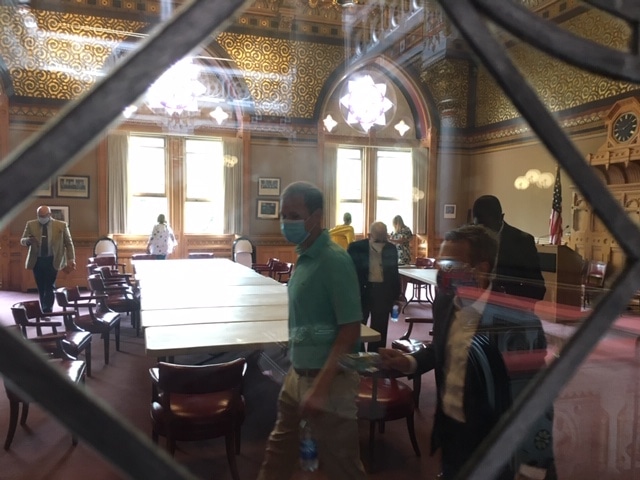 Legislators preparing to leave a socially distanced meeting in the Old Judiciary Room on Monday.

Gov. Ned Lamont said Monday he will extend Connecticut’s public-health emergency into February to keep intact dozens of COVID-19 restrictions that otherwise would expire on Sept. 9, the last day of the six-month emergency he declared in March.

Lamont finalized his decision after meeting with legislative leaders to talk about his COVID restrictions, as well as the potential agenda and timing of a special session of the General Assembly in September. Republicans, however, quickly disagreed with his characterization of having GOP support.

His new order will extend the emergency for five months until Feb. 9, expiring a month after the General Assembly opens its regular session for 2021. Lamont intends to sign it Tuesday, starting a 72-hour time period in which a legislative committee can accept the extension without action or vote to reject it.

“I didn’t want all those emergency orders to come to an end on Sept. 9, and you have a big rush in terms of what stores open and what bars stay closed and such. We thought it was better for continuity to extend it a longer period of time,” Lamont said.

Legislative leaders from both parties seemed to acknowledged before the governor’s announcement the necessity of a new emergency order, given the impracticality of the alternatives: Letting all restrictions expire while the coronavirus is still a threat, or convening the legislature for a line-by-line review each of Lamont’s orders in the next week.

“It certainly would be logistically difficult to just say all of a sudden on Sept. 10 everything goes back to pre-COVID,” House Minority Leader Themis Klarides, R-Derby, said as she left the legislators’ meeting. But her position evolved after the governor’s announcement at a 4 p.m. press briefing.

“I’m not so inclined to give it carte blanche,” Fasano said. “I do think there should be a review process.”

Klarides said after the governor spoke that the pandemic poses a continuing health threat, and she does not favor allowing bars, restaurants and other venues to operate without restrictions. But she said the governor needs to specify which restrictions he wishes to continue.

“The governor is ruling by fiat, and there is no transparency here,” Klarides said.

Klarides said she is generally supportive of what she considers to be restrictions that are strictly focused on health, such as social distancing rules for public gatherings, restaurants and stores and the governor’s requirements for the wearing of masks in most public settings. But she questioned Lamont’s interventions into landlord-tenant relations.

On August 20, the governor said he would continue until October a moratorium on evictions.

Klarides said she would vote against extending the governor’s emergency powers — if given the chance.

Under the state’s public emergency laws, a committee of 10 lawmakers can vote to reject a governor’s declaration of an emergency.

Democrats hold a 6-4 majority on the so-called Committee of Ten. By law, it is composed of the Democratic majority and Republican minority leaders of the House and Senate, the Democratic co-chairs and ranking Republican members of the Public Health Committee, and the top leaders in both chambers, the Senate president pro tem and the House speaker.

Klarides and Fasano say they will ask the Committee of Ten to meet, but that panel only can reject an extension of the public emergency, not define or limit it. The legislature as a whole has that power, but House Majority Leader Matt Ritter, D-Hartford,  said Klarides was correct in her original assessment: It is impractical to conduct that review before Sept. 9.

“It would be the height of irresponsibility for the committee to say, ‘No.’ [to Lamont’s extension.]That would leave the state in crisis,” Ritter said.

“There would be nothing preventing reopening if the order expires,” said Senate President Martin M. Looney, D-New Haven.

COVID-19 was blamed for more than 4,000 deaths in Connecticut in the earliest months of the pandemic, one of the highest per-capita death rates in the U.S. after New Jersey and New York. The state’s infection rate is now among the nation’s lowest, and there have been no COVID deaths since last week.

But Lamont and public-health officials say it is premature to lift restrictions that are keeping bars closed and limiting capacity of restaurants, stores and other venues.

At the time, the state had just two residents diagnosed with the virus, plus two New Yorkers who worked in hospitals in Bridgeport, Danbury and Norwalk. As of Monday, there were 4,465 deaths and 52,879 confirmed cases in Connecticut.

An extension of the governor’s emergency power does not necessarily mean that every COVID restriction would remain intact until February. For example, Lamont has relaxed many of the original orders, which forced the closure of schools, restaurants and many other businesses.

Monday, wearing masks and keeping a social distance, lawmakers and Lamont met relatively briefly at a long table in the Old Judiciary Room of the State Capitol. Then the legislative leaders continued talking for several hours about a limited special session.

House Speaker Joe Aresimowicz, D-Berlin, said the leaders were talking about items necessary for the continuing functioning of government, as well as a limited agenda of other issues.

“Some of the members want to do an energy bill in response to  some of the issues that have been identified over the last storm,” he said, referring to the power outages after Tropical Storm Isaias.

The legislature’s Energy and Technology Committee is preparing a bill that will be subjected to an informational hearing, he said.