Leaders will vote, if only for the political show, on extending Lamont’s emergency powers 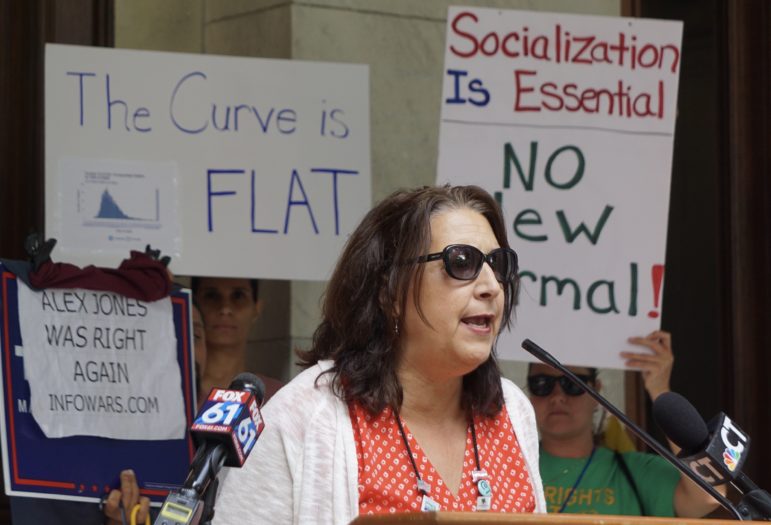 Connecticut’s management of the COVID-19 pandemic blossomed Thursday into a wedge issue in the campaigns for General Assembly as the Democratic majority accepted a Republican challenge to vote Friday on the extension of the governor’s emergency powers.

After being taunted for 24 hours by the House GOP, Democratic leaders scheduled a meeting of a special oversight committee that is certain to ratify Gov. Ned Lamont’s declaration of a continued emergency on a party-line vote.

No vote is necessary for the declaration to be accepted; only if the legislature wishes to reject it. Democrats hold a 6-4 majority on the panel and say there is no question they will back the Democratic governor and his handling of the pandemic.

“Apparently some folks want to have this debate,” said House Majority Leader Matt Ritter, D-Hartford. “It will be a good chance to remind people that the earth is not flat, masks work and science will be the only way to get out of this mess.”

Lamont’s original declaration of an emergency on March 10 was limited to six months. Without an extension, it would expire on Sept. 9 and instantly end Lamont’s ability to enforce rules for wearing masks, closing bars, and limiting large public gatherings.

The House Republican minority held a press conference Wednesday objecting to the legislature’s failure to assert itself in the management of the pandemic, but they failed to articulate which of Lamont’s 73 emergency orders they wished to nullify.

The GOP is trying to steer clear of a debate over science, focusing instead of whether the legislature’s Democratic majority has been too passive an observer during the pandemic.

“It’s not a conversation in the context of science and whether masks work,” said Rep. Vincent J. Candelora, R-North Branford, the deputy minority leader.

Senate Minority Leader Len Fasano, R-North Haven, who kept his distance from the House GOP press conference, indicated he has no interest in using the meeting to challenge specific restrictions.

“I welcome the opportunity to put our concerns about the process on the record at this meeting,” he said. “Republicans are not asking for the state to stop the precautions we have in place today. We are asking to be involved in the process as our state works to protect the public and recover from the pandemic.”

But a modest rally calling for an end to Lamont’s emergency powers outside the Capitol questioned the risk posed by COVID, the science behind fighting the disease, and whether Lamont was a dictator.

A half-dozen House Republicans and one Senate Republican spoke at the rally, as did a landlord angry with Lamont’s moratorium on evictions, a lawyer who spoke darkly of COVID research funded by the Bill & Melinda Gates Foundation, and a chiropractor who sees the pandemic as overblown.

“The virus is real, but the media is the pandemic,” said Matt Cuculo, the chiropractor.

Ken Ernhout of Litchfield, who owns apartments in Torrington, said the eviction moratorium Lamont recently extended until October has been damaging. Eviction proceedings started against a tenant who has not lost income during the pandemic are now stalled, and the tenant has stopped paying rent.

“This is my property, not Ned Lamont’s. This has gone on way too long,” he said.

President Donald J. Trump gave Lamont a measure of political cover this week with his own eviction moratorium and this promise: “I want to make it unmistakably clear that I’m protecting people from evictions.”

Trump’s moratorium lasts until the end of the year. Unlike Lamont’s, it comes with certain eligibility requirements.

With varying degrees of animus, House Republicans criticized the governor and the Democratic leaders for the powers asserted by Lamont and the lack of oversight by lawmakers.

Others were more heated.

The House Republicans speaking at the rally were Dauphinais, Betts, Rick Hayes of Putnam, Irene Haines of East Haddam, Gale Mastrofrancesco of Wolcott, and David Wilson of Litchfield. Dan Champagne of Vernon was the only senator.

Some speakers spoke of Lamont’s original restrictions on retailers —stores that did not sell food, medications, hardware and other essentials were ordered closed — as though they still were in effect, unchanged from March.

“Many of them are here today arguing that they are putting bread and butter on their tables and trying to feed their families. And yes, that’s essential,” Dauphinais said.

Non-essential retailers have been open since May 20, operating under the same rules as big-box retailers. Stores are limited to 50% of capacity, as set by fire codes.

Before May 20, some florists complained they were shuttered while, a grocery stores could continue to sell flowers, because they also sold essential goods.

Mastrofrancesco questioned the science behind any store closures.

“I want to challenge the governor right now. I want you to show me the science,” Mastrofrancesco said. “Show me the science that says shutting down a business, a family, keeping people in their homes is going to help. Businesses are struggling. If you can go into Stop & Shop and buy flowers, you can go into a florist. There’s no science out there. There’s absolutely no science out there that says shutting down a business is going to do everything. You open up every single one of these businesses right now, and let people make a living.”

Behind them was a sign praising the Infowars founder and conspiracy promoter, Alex Jones, who has been challenged by the Food and Drug Administration for selling purported COVID treatments. The sign said, “Alex Jones was right again.”

Jonathan Johnson, a Libertarian candidate for the House and the founder of CTLibertyRally.org, said Lamont has destroyed his event-oriented business: Providing photo booths to weddings and other events.

“In one day, Gov. Lamont took my business away from me,” he said. “We need to end this lockdown now. We need to open Connecticut.”

But Johnson hesitated when asked if all restrictions should be lifted on large events. A wedding in Maine is currently blamed for more than 140 new cases of COVID.

“That’s a tough question, I guess,” he said. After a long pause, he added, “I personally believe events should be open, yeah. That’s my short answer.”

Lamont said Thursday that 95% of businesses are open, albeit under limits. The major exceptions are bars and event venues, including sporting events, conventions and wedding halls. Thursday was supposed to have been the opening game for UConn, playing UMass.

Via video conferencing, the governor was joined at his briefing by Connecticut’s two highest-paid state employees, Geno Auriemma and Dan Hurley, the coaches of the women’s and men’s basketball teams at the University of Connecticut.

Both urged students be patient — and that they comply with the COVID restrictions.

Connecticut’s success, however, also is a source of difficulty for the governor. The metrics for the further easing of restrictions turn on factors currently in Connecticut’s favor: The state has low infection rates, hospitals unburdened by COVID cases, and a robust system of testing.

On Thursday, the administration announced it would be providing mobile rapid-response testing at any school with COVID cases. Overall, it is performing 100,000 tests a week, with a positive rate of no more than 1%.

“I think what’s happening in Connecticut is a model for the rest of the country…if you do it the right way, if you listen, and you have good leadership, and you are all in this together and you believe in each other and trust each other,” Auriemma said.

Hurley said the two teams would love to have fans in the seats this winter. He held out the prospect as an incentive to follow the social-distancing rules now.

“So, be smart this Labor Day weekend. Don’t be complacent. Don’t let up. Don’t relax. Follow the guidelines. Be disciplined,” Hurley said. “Just remember we’re all on the same team here.”

Lamont offered nothing new on the question of when restaurants, which are now limited to 50% of their seating indoors, might be permitted to increase capacity.

He said his focus was on the reopening of schools and colleges, but restaurants were on his agenda for later this month, when the weather cools and the expanded outdoor seating now helping keep many restaurants in business becomes less attractive.

But he had no specific metrics: Would an infection rate under 3% make him comfortable with more indoor dining?

“I don’t think I have a direct metric on that as yet,” Lamont said. “But right now, I  think our instincts have been good, and people understand where we’re headed.”

As Auriemma said, that’s a question of trust. 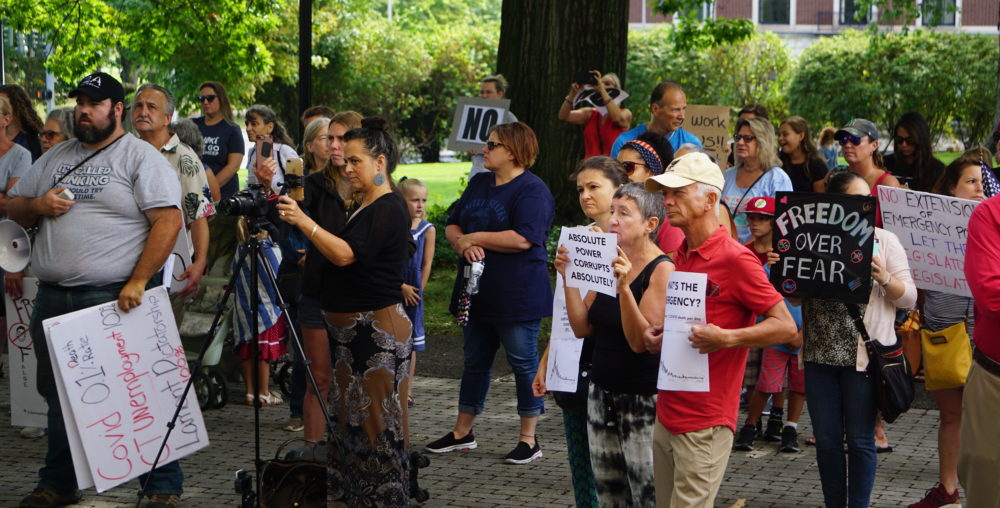 The crowd at Thursdays rally outside the Capitol.