Report: Number of working poor on the rise in CT leading up to the pandemic

For more than a decade prior to the pandemic, a growing number of working poor families in Connecticut faced stagnating wages and a rising cost of living, according to a new report from the United Way.

The latest biennial ALICE analysis — an acronym for Asset Limited, Income-Constrained and Employed households — also found that 38% of Connecticut’s nearly 1.4 million households could not afford basic needs in 2018, including 11% that lived below the federal poverty level. 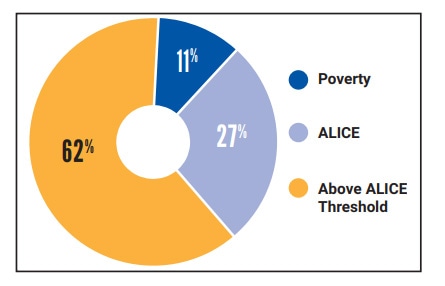 “ALICE is our friend, our neighbor, our co-worker,” said Richard J. Porth, CEO of the United Way of Connecticut. “ALICE could be our brother or sister, or even our children.”

The coronavirus pandemic also has shown how much Connecticut relies on this group. “We all depend on ALICE,” Porth said, noting that many caregivers in nursing homes and and in other health care jobs fall into this group, as do restaurant workers.

Working poor households became increasing common between 2007 and 2019, increasing in number by 40% over that period, according to a new report compiled by the United Way’s 16 regional offices.

The ALICE report asserts that the federal poverty level establishes too minimal a standard, and attempts to quantify the income needed in Connecticut to purchase basic goods and services including housing, food, health and child care,  transportation and technology.

That last item — technology — has become even more crucial since the pandemic began, as laptops, computer tablets and reliable home internet access are essential for many adults to work and for children to attend school remotely, Porth said. 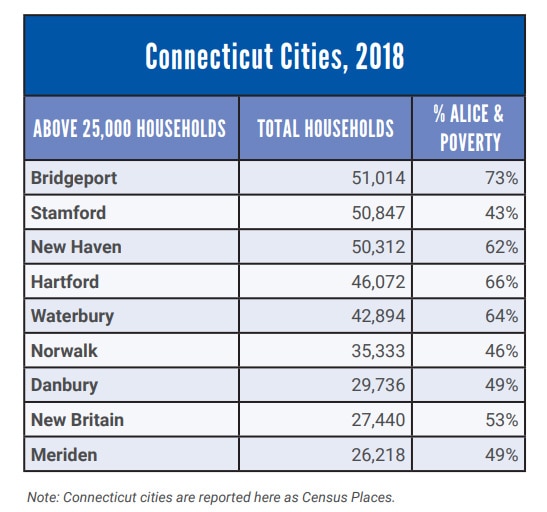 ALICE households in Connecticut are far more likely to involve racial and ethnic minorities and be concentrated in urban centers, the report found.

And while the number of ALICE households is growing, the challenge they face is rising as well.

The cost of basic goods and services in Connecticut has risen faster than that of other expenses. Basic inflation between 2007 and 2018 was 1.8% while the cost of items on the ALICE survival budget rose 3.4%.

Workers also are increasingly vulnerable, with a record-setting 52% of employees paid hourly and 45% of all jobs in Connecticut paying less than $20 per hour.

Gov. Ned Lamont and the General Assembly did approve a series of increases to Connecticut’s minimum wage in 2019.

Other trends identified in the report include:

Commuting times will continue to increase as rising housing costs and urban sprawl push workers farther from their jobs. A survey showed that 88% of Connecticut residents, on average, have access to a car, but just 59% of the working poor have their own transportation.

Access to child care is becoming more challenging for many families. In Connecticut, 44% of families “live
in a child care desert,” defined by the report as a region having three children for every available licensed child care slot.

The report recommends that the state accelerate efforts to broaden internet access, both for jobs and for education.

The report urges policymakers to continue seeking ways to elevate the earnings of poor families.

If all households below the ALICE threshold were to earn enough to clear that barrier, the report states, it would been a huge economic boon to Connecticut.

ALICE households, which earned $14.3 billion in 2018, would need to make another $14.9 billion to clear that mark. Because poor families already save very little money, most of their earnings are spent, spurring additional economic activity.

The report projects that raising all households’ earnings above the ALICE level would then generate about $2.9 billion in additional, federal, state and local tax revenue.

Report: “If all households earned enough to meet their basic needs, not only would each family’s hardship be eased, but the Connecticut economy would also benefit substantially.”

“If all households earned enough to meet their basic needs, not only would each family’s hardship be eased, but the Connecticut economy would also benefit substantially, the report states.

“Instead of a downward cycle of accumulating fees, debt, and stress,” the report added, “families can have an upward cycle of savings and health that makes them even better able to be engaged in their communities and, in turn, enjoy a reasonable quality of life.

More data specific to Connecticut may be reviewed here. 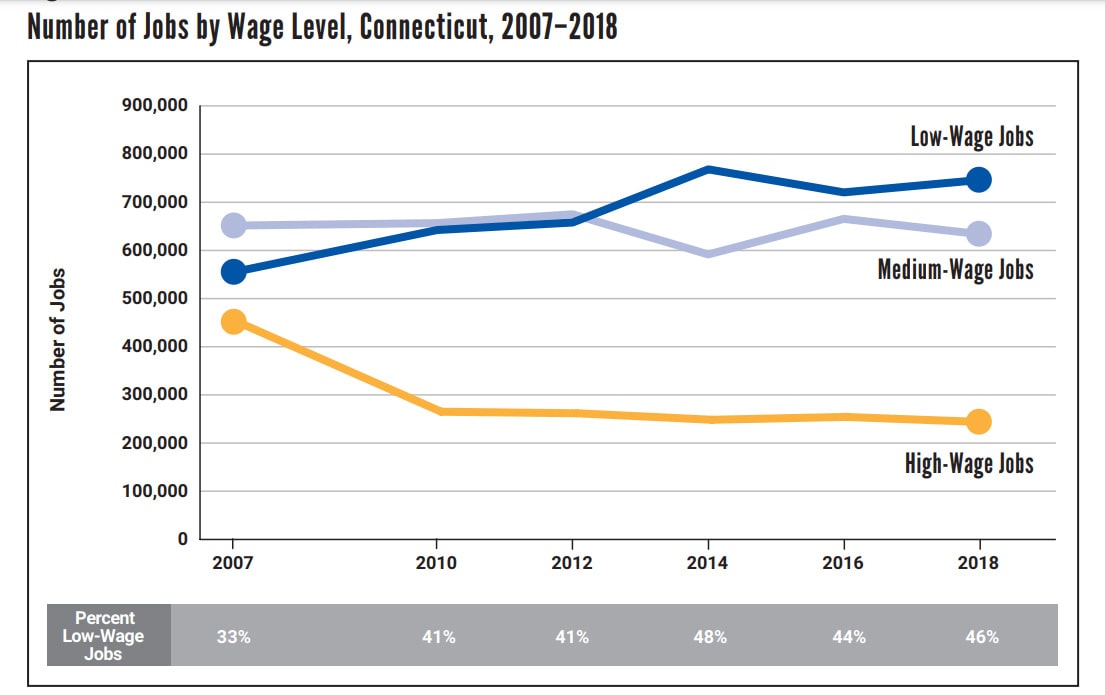 Lamont urges all Connecticut adults to get COVID booster shots

"If you’re over 18, go get yourself a booster shot right now if you haven’t had one already," he said.

Without broadband access, CT small businesses are locked out of markets

There is a growing digital divide among Connecticut businesses, and as internet speeds accelerate, small businesses could get left behind.

There are more jobs than jobless people in 42 states

A record number of job openings and fewer workers to fill them have left 42 states with more available jobs than people looking for work, […]