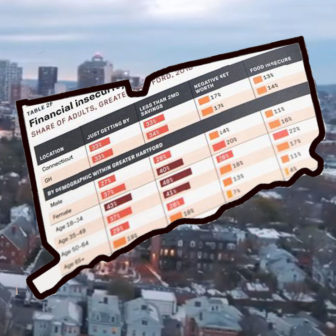 Black and Latino people in the state have not only borne disproportionate loss of life due to COVID-19, but have also been hardest hit financially, according to data released Thursday. The multi-faceted analysis tells a tale of two pandemics as COVID-19 exacerbates existing health and economic inequities.

Among the most striking findings is that Black people are nearly twice as likely to have lost a loved one or friend to the coronavirus as white people. They are also much less likely to feel that their employers are keeping them safe at work. From an economic standpoint, Latinos experienced higher rates of job layoffs and greater housing insecurity.

The data was compiled and released by DataHaven, a New Haven-based nonprofit research group that seeks to inform public policy and analysis.

Some preliminary findings from the release were published last week and referenced in a press briefing by Gov. Ned Lamont. The report showed that a high percentage of Connecticut residents wear masks (89%) and that only 20% of residents would chose not be vaccinated against COVID-19 when a vaccine is made available.

The governor also referenced another finding from the survey — that 87% of state residents believed that their employers were keeping them safe.

But a racial breakdown of this statistic paints a more sobering picture: While 87% of whites and 89% of Latinos surveyed thought their employers had done enough to keep them safe, only 68% of Blacks did. Higher percentages of Black people also reported leaving the house more often for work than whites did, although that number was comparable to the percentage of Latinos who had to leave home to work.

When compared to whites, Black residents were more likely to say that they were worried about bringing the pandemic home to their loved ones and to worry about being able to effectively self-isolate from other members of their households if they had been exposed to the disease.

Their anxiety is borne out by the numbers. In DataHaven’s sea of statistics, there is this stark — if unsurprising — one: One in five Black people in Connecticut have lost a family member or a close friend to COVID-19, while for whites the ratio is closer to one in 10. Latinos don’t report dramatic differences from whites in this regard, although the Latino population in the state skews younger, according to Census estimates.

The loss of Black lives “…also speaks to the fact that more people of color have co-morbidities like diabetes, hypertension, and even for a lot of individuals, asthma,” said Tiffany Donelson, president and CEO of the CT Health Foundation, a nonprofit based out of Hartford that is dedicated to ensuring health equity in the state. “We started from a system that was already filled with disparity, and COVID-19 is exacerbating these disparities.”

In questions about employment, racial disparities also abound: Latino residents reported being laid off at higher rates than whites or Blacks, with 37% of residents saying that they had lost their jobs. Latino residents also reported thrice the rate of housing insecurity when compared to white people.

Latinos lost health insurance coverage during the pandemic at nearly three times the rate of whites, while Black people reported twice the rate. These numbers are entirely in keeping with the Kaiser Family Foundation’s coverage estimates from 2018, Donelson said, adding that she fully expects that “these statistics will increasingly get worse.”

What gives her hope is that the pandemic has “increased awareness of health inequities” and “will continue to precipitate requests for data overall,” she said, adding that she hopes to see more data broken up by ethnicity and language in the future.

Connecticut is often touted as being in the top five healthiest states in the nation, but that can make inequality hard to see and understand, Donelson said. The “goal is to make sure that all people can be a part of that statistic.”

Wednesday’s release is the fourth installation of DataHaven’s Community Wellbeing Survey and compiles the responses of 1,108 randomly selected state residents to questions about the impact of the COVID-19 pandemic on their lives. The interviews were conducted by DataHaven and the Siena College Research Institute between July 27 and August 18, and the responses were then weighted to be representative of Connecticut’s population.

“The purpose of the DataHaven Community Wellbeing Survey is to produce the most accurate, locally-relevant information on issues that are most meaningful to residents, thereby adding to what public agencies are able to collect through administrative record-keeping systems,” said Mark Abraham, Executive Director of DataHaven. “As many families face new challenges related to the coronavirus pandemic’s impact on the economy, health system, and society at large, it is encouraging that so many organizations are continuing their collaboration to collect information that truly represents the voices of residents throughout the state.”