Farewells and bipartisan votes in a special House session 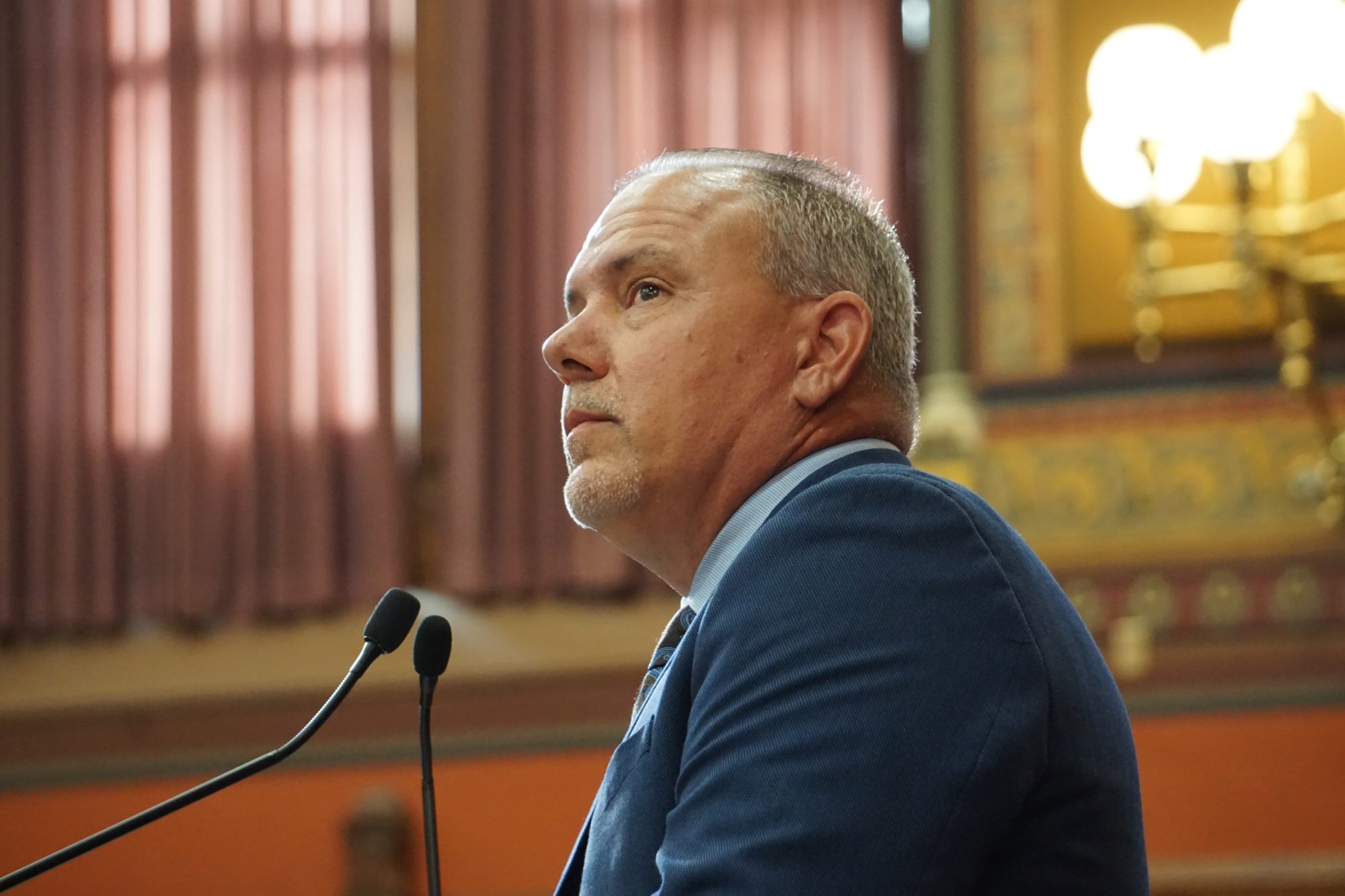 House Speaker Joe Aresimowicz presiding over what was likely his last session day as speaker.

Partisanship took a holiday Wednesday as the House of Representatives confirmed judicial nominations, passed bills and bid farewell to leaders of both parties in its last scheduled meeting before a new legislature takes office in January.

The Republican minority had questioned the need for the session, but they mostly voted with the Democrats on a series of bills negotiated to generate maximum support and minimum debate a month before the Nov. 3 election.

The highest-profile measure was a legislative response to a massive blackout after Tropical Storm Isaias in August. It directs regulators to implement a performance-based rate system that would favor ratepayers over shareholders.

House Bill 7006, the measure dubbed “Take Back Our Grid,” passed on a vote of 136-4 and is likely to be featured in campaign mailers.

It would require utilities to pay customers $25 for each day power is out beyond 96 consecutive hours, $250 for lost food and medicine if power is out for that period of time, and would begin a process aimed at providing more reliable staffing levels for storm response.

While Gov. Ned Lamont strongly backed the regulatory bill, his administration’s priority was House Bill 7001, a technical measure aimed at simplifying assessing liability for pollution on properties as they are sold. The rewrite of the so-called Transfer Act came after a study finished in February.

Rep. Caroline Simmons, D-Stamford, co-chair of the Commerce Committee, said 4,200 properties are in limbo due to the Transfer Act. She called the measure pro-environment protection and pro-economic growth, because it frees some properties for sale and focuses more attention on “high-risk properties.”

COVID forced an end to the regular session in March, setting the stage for a special session in July and a final one this week. On Wednesday, most lawmakers monitored the debates from their offices. Those in the chamber wore masks.

Most of nine bills taken up passed on unanimous votes, as did the confirmations of Christine E. Keller to the Supreme Court and Joan K. Alexander, José A. Suarez and Melanie L. Cradle to the Appellate Court. Others passed on lopsided votes.

The exception was a school construction bill with $189 million funding for a new Norwalk High School sought by Senate Majority Leader Bob Duff, D-Norwalk. Republicans tried to strike the project from the bill, saying Duff was seeking to go outside the normal review process. Their amendment failed, 86-51. The bill passed, 99-38, after midnight.

House Bill 7005, which is  intended to quicken the counting of absentee ballots, was approved, 139-5. It also creates an election monitor for Bridgeport.

House Majority Leader Matt Ritter, D-Hartford, said overwhelming votes reflected weeks of negotiations, helped by a friendly tone set by a series of tributes to departing legislators on both sides of the aisle.

The two caucus leaders, Aresimowicz and Klarides, struggled for composure as they referred to each other as friendly adversaries. They talked about mutual respect for those who put their names on the ballot and serve.

Aresimowicz started to speak of leaving, then paused to gather himself.

“It’s going to be a lot harder than I thought,” said Aresimowicz, an AFSCME official and high school football coach in Berlin.

“I can’t do this,” Klarides said, laughing and dabbing her eyes. “I will just say it’s been the honor of my life.”

Republicans came within four seats of winning a 76-75 majority in 2016, the closest Klarides came to unseating her friend, Aresimowicz, as speaker. Democrats rebounded in 2018, helped by the galvanizing effect Donald J. Trump’s win had on the Democratic base. 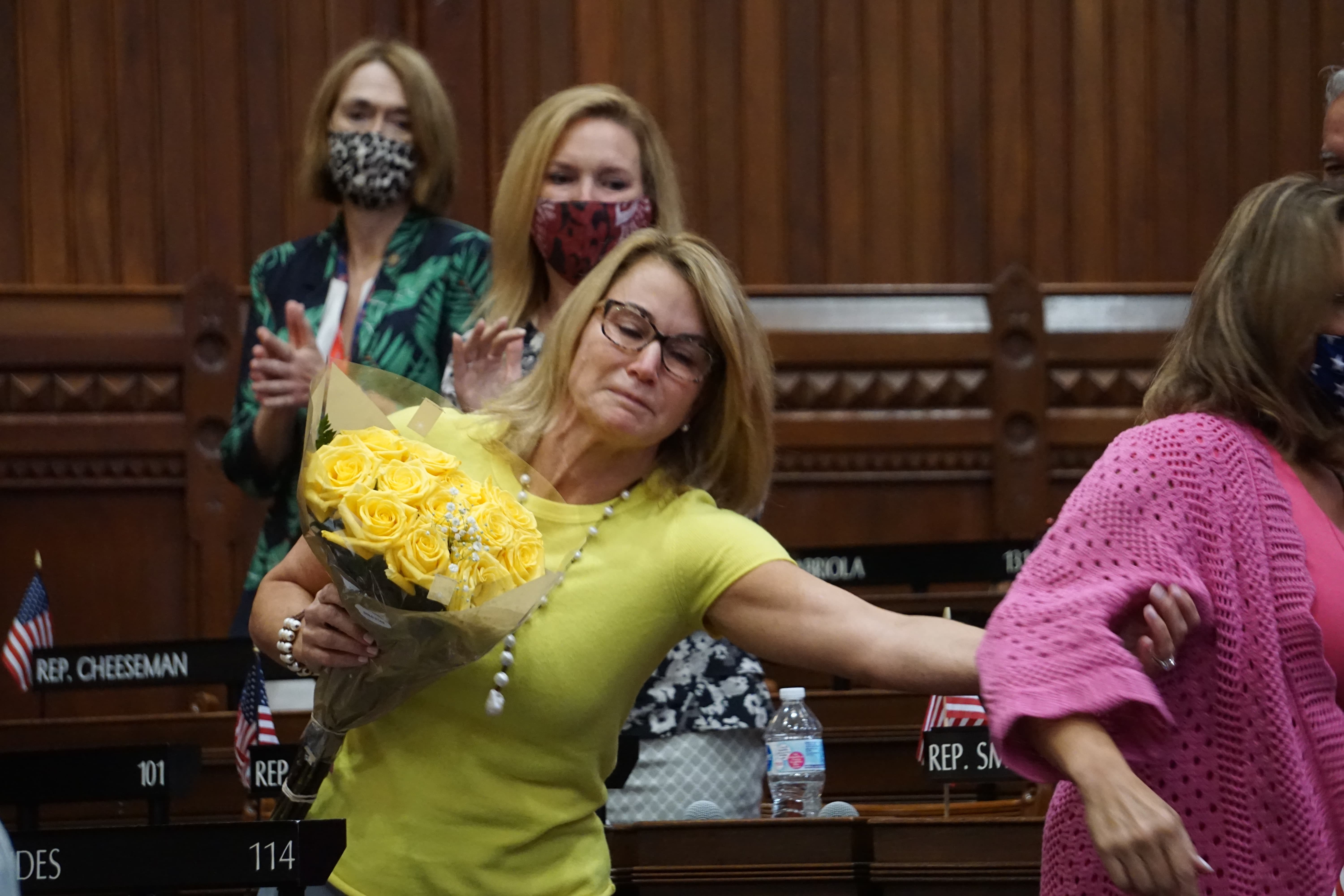 House Minority Leader Themis Klarides reaches to her sister, Rep. Nicole Klarides-Ditria. The latter had just given Klarides flowers after her the leader’s farewell remarks.

The General Assembly has not been immune to the increasing polarization of U.S. politics, but a majority of its bills pass on bipartisan votes ,and the leadership has largely avoided the brinkmanship that has become a routine feature of congressional politics.

Aresimowicz briefly referred the previous night’s ugly presidential debate, saying that was not politics as practiced in the Connecticut General Assembly.

After the tributes, Ritter and Candelora huddled to review the rest of the day’s agenda.

“Many of these bills were discussed and worked out on a bipartisan basis, so we’re going to have unanimity,” Candelora said. “And frankly I think a big factor also is the time of the year, being five weeks out from an election where you have a lot of contention. I think nobody is interested at the state level to duplicate the behavior that’s going on at the federal level.”

The electric regulation bill was negotiated by the Democratic co-chairs and Republican ranking members of the Energy and Technology Committee. It was the only measure that generated significant debate, most of it reflecting anger at the state’s two major electric utilities, Eversource Energy and United Illuminating.

“The utility put their shareholders as their number one priority,” said Rep. David Arconti, D-Danbury, the energy co-chair.

The bill would shift the balance toward ratepayers and direct the Public Utilities Regulatory Authority to consider penalizing bad performance by limiting what executive compensation can be reflected in rates, he said.

“It’s a fine line to try to walk, especially when it comes to energy policy,” Arconti said. “They are the regulators. They take their direction from us, the policy makers. So that’s what we tried to accomplish in this bill.”

The Senate is expected to take up the bills Thursday.

Other bills on the agenda Wednesday: 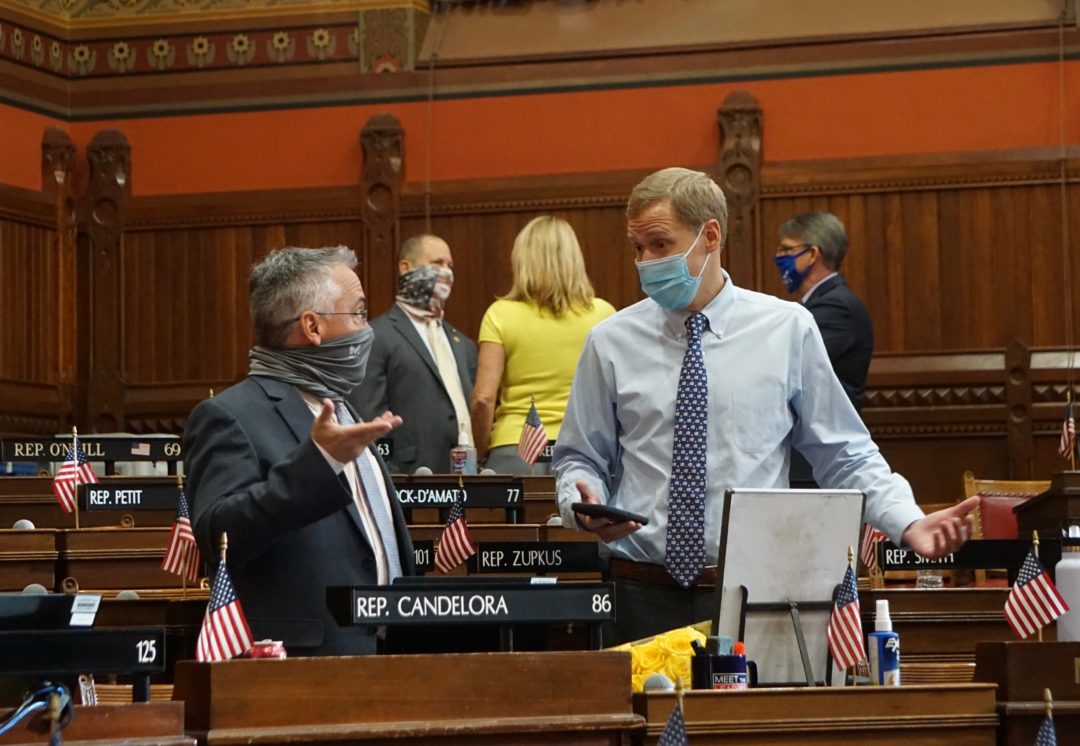