Senators takes tough stand on Eversource. Even the ones who work there. 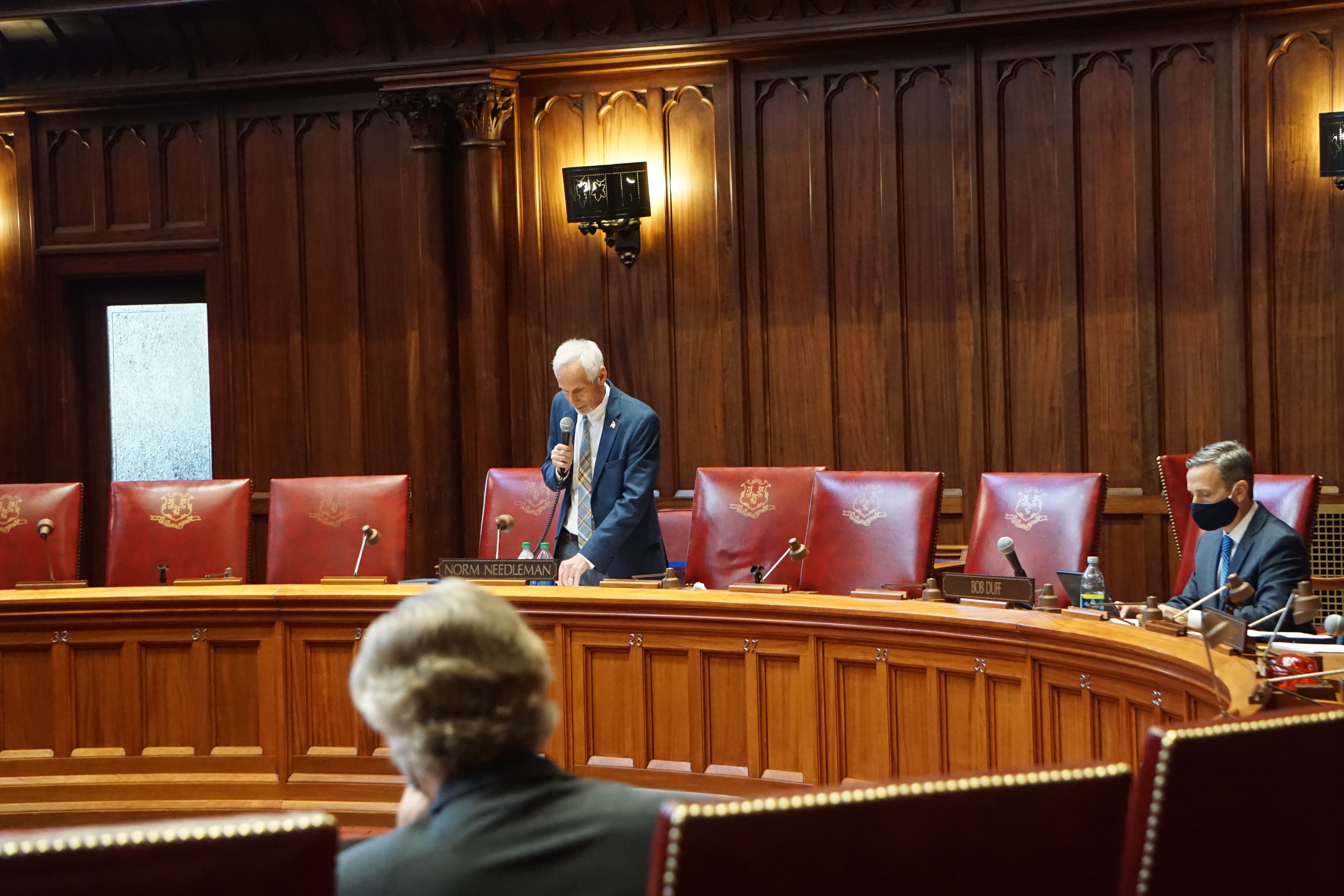 Sen. Norm Needleman explains the energy bill across from Sen. Paul Formica. They are the co-chair and ranking member of the energy committee. At right is Senate Majority Leader Bob Duff. The chamber was largely empty due to COVID-19 precautions.

How irresistible was the appeal of voting Thursday for final passage of legislation crafted as a rebuke of Connecticut’s largest electric utility, Eversource Energy? Three Republican senators employed by Eversource voted for the measure, bowing to constituent demands.

Eversource, historically a lobbying power at the State Capitol, seemingly has few friends in Hartford at the moment, a consequence of a rate increase in July closely followed by a blackout in August. One after another, senators lined up to praise the bill and jab at Eversource’s performance.

The company is deemed so politically unpopular that three employees who typically recuse themselves from bills affecting Eversource decided they could ill afford to stay neutral — not on this bill, not one month from Election Day. They said nothing during the debate, but voted for passage.

“This doesn’t benefit my employer, and my constituents spoke with one, loud voice, especially after the rates went up,” Sen. John Kissel of Enfield told the CT Mirror after the vote. “It was the one-two punch between the rate increase and the storm. So here it is before me, and we all decided to support it.”

Kissel is a lawyer at Eversource. The other Eversource employees are the deputy minority leader, Sen. Kevin Witkos of Canton, and Sen. George Logan of Ansonia.

“This is a bill my constituents wanted me to vote on,” said Logan, an executive at Aquarion Water Company, which was acquired by Eversource in 2017, the year he took office. “It certainly doesn’t benefit my employer.”

The bill requires utilities to pay customers $25 for each day power is out after 96 consecutive hours, plus $250 for lost food and medicine. It also nudges PURA, the Public Utilities Regulatory Authority, to link executive compensation to performance.

Witkos recused himself from debating or voting on a bill in 2012 that addressed utilities’ readiness and response after a string of storms produced widespread and lasting power outages. The difference this time, he said, is the public insistence on action.

“I always vote for the way my constituents are asking me to — and they demanded that I vote on this bill,” Witkos said. “And so representing my constituents to the best of my ability, I cast the vote.”

Nothing in Connecticut’s narrowly drawn ethics rules bar legislators from voting on matters that help or harm their employers. In a state with a part-time legislature, almost anything goes as long as elected officials or their families don’t end up with money in their pockets as the direct result of legislative action.

The only senator not to vote on the energy bill was Sen. Dennis Bradley, D-Bridgeport, who missed most of the votes in the special session.

Eversource, whose Boston-based chairman and chief executive officer, Jim Judge, personally lobbied key lawmakers for changes to the original draft of the bill, did not characterize the final version as harming its interests — despite the opinions of the senators who work for the company.

“The legislation passed tonight includes performance-based regulation which we believe will benefit our customers,” said Tricia Taskey Modifica, a company spokeswoman. “This new approach will hold us accountable if we fall short in meeting certain standards, and will acknowledge when we exceed the standards, which we believe will result in better service for our customers. The legislation also includes an important provision that affirms PURA’s ability to adopt storm performance standards based on industry best practices.”

Not all senators were as sanguine as the company.

Some found fault in the bill, lamented the speed with which it was drafted and predicted unintended consequences, including the possibility of higher rates. But every senator voted for that measure,House Bill 7006, that cleared the House the previous day by a lopsided vote of 136-4.

“It bothers me a little bit. We are rushing it,” said Senate Minority Leader Len Fasano, R-North Haven.

The legislature met this week to consider nine bills in the second special session since COVID-19 forced an end to the regular session in March. Fasano said he saw no reason for a special session so late in the year.

“Before 2011, they had a lot more autonomy and a lot more staff,” Fasano said of the regulators. 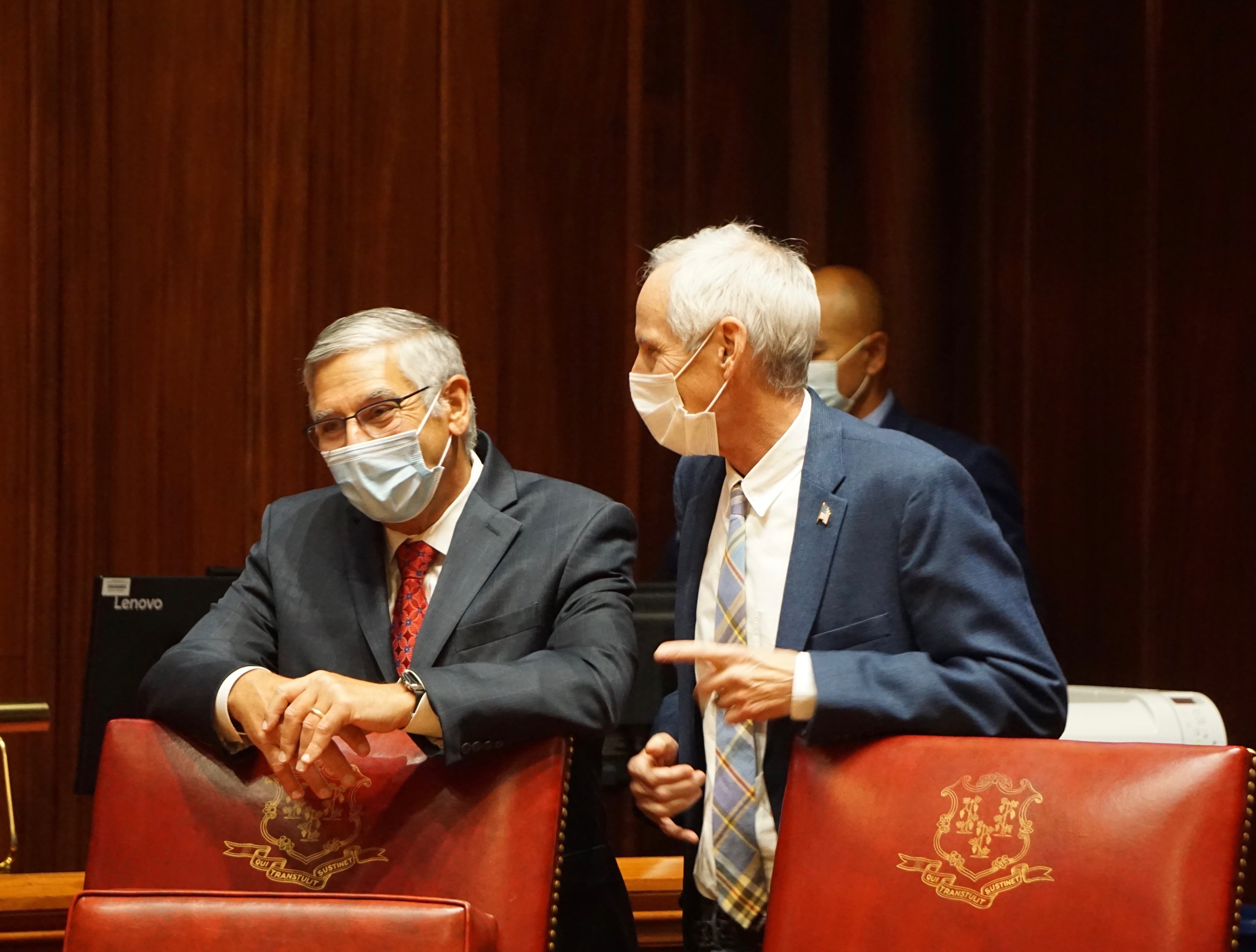 Sen. John Fonfara, D-Hartford, a former co-chair of the Energy and Technology Committee, said he believes the cost of crediting customers for lost power and food would be borne by all ratepayers, not company shareholders.

He also predicted that the 96-hour standard for restoring power will lead to Eversource and the state’s other major utility, United Illuminating, from increasing staff, a cost that is recoverable through rate increases.

“There is no magic here, no stardust,” Fonfara said. “Somebody pays. In my opinion, it won’t be the companies.”

But because of the discretion the measure affords PURA in implementing standards, Fonfara said he would vote with the rest of the Senate.

Fonfara, who owns an interest in a retail electric supplier, Wattify, has recused himself from some energy debates. Fonfara said this bill passed Thursday had no impact on his company.

Fines and other penalties cannot be recovered in rates, and the bill gives PURA flexibility in enforcing the 96-hour standard, Needleman said.

“We know that not all storms are created equal,” Needleman said. A major hurricane, he said, could require rebuilding of a system, not just restoration of power.

The bill was bipartisan in its drafting, not just its support. Needleman and his co-chair, Rep. David Arconti, D-Danbury, worked closely with the ranking Republicans on the committee, Sen. Paul Formica of East Lyme and Rep. Charles Ferraro of West Haven.

Another provision of the bill expands the time allowed PURA to review rate cases. It currently is the shortest in the country, limiting the regulators’ review, said Senate President Pro Tem Martin M. Looney, D-New Haven.

The other eight bills that won final passage Thursday: