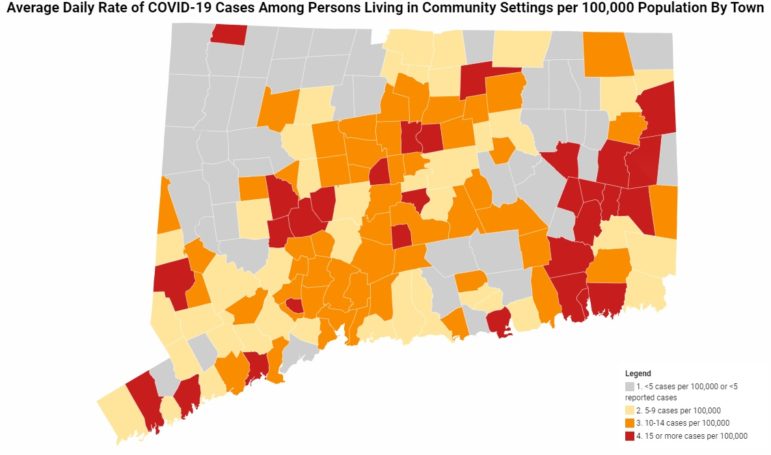 Connecticut’s daily coronavirus infection test rate soared beyond 6% on Thursday — roughly six times the daily rate the state faced all summer and early into the fall.

A somber Gov. Ned Lamont warned residents to brace for the worst, but he opted not to reverse the Oct. 8 easing of restrictions on business activities.

Instead, the governor granted more municipalities flexibility to tighten rules on businesses within their own borders — though he warned he could order new restrictions statewide as soon as next week.

“I looked hard to find a silver lining, and I can’t find it in these numbers,” Lamont said during a televised briefing on the state’s public access channel.

Of the 21,739 COVID-19 tests completed by public and private labs Wednesday, 1,319 came back positive, a rate of 6.1% The administration also reported five more deaths due to coronavirus, bringing the total since the pandemic began to 4,609.

Hospitalizations due to the virus also jumped by 12 in the latest report, bringing the statewide total to 321.

It took all summer and three weeks into the fall for daily infection rates to rise from 1% to 2%. It then took just one week to clear the 3% mark on Oct. 20, and another seven days — until Tuesday — to exceed 4%.

Throughout that surge, the governor has said he wouldn’t consider stalling or reversing Connecticut’s business re-openings unless the state’s weekly average infection rate — a much more important metric for most healthcare officials — approached or exceeded 5%.

Connecticut’s weekly average, through the latest report, stands at 3.4%.

But Lamont acknowledged Thursday that the accelerating infection surge is a concern.

“I was hoping it was more gradual,” he said. “Today may be a harbinger that it’s steeper than that.”

But the governor had announced earlier this month that communities with more than 15 coronavirus cases per 100,000 residents — based on two weeks of test results — could opt to roll back the Phase 3 rules for businesses.

Windham is the only one out of 30 communities eligible to tighten business rules.

The governor broadened that option Thursday, saying communities with more than 10 cases per 100,000 residents also could roll back Phase 3.

That means about half of all Connecticut’s 169 cities and towns, 85 in total, now can tighten rules on businesses. Those communities contain about 70% of Connecticut’s population, the governor said, urging them to follow Windham’s example.

“Phase 2 is probably a safer place to be,” he said.

Officials in New Haven went that direction Thursday, announcing that the city would revert to Phase 2 and that the school system will remain almost exclusively online. Bridgeport Mayor Joseph P. Ganim said he will announce details of a rollback in his city on Friday.

Joe DeLong, executive director of the Connecticut Conference of Municipalities, praised Lamont for offering the option to communities, predicting it would “pique interest.”

Because Connecticut is a relatively small state, some municipal leaders were fearful if they tightened rules on businesses, customers could reach stores in neighboring towns with a simple 10-minute drive or less, he said. But with 85 cities and towns now having the option, “this certainly gives them a greater level of flexibility to work together regionally.”

Chris DiPentima, president and CEO of the Connecticut Business and Industry Association, noted that Lamont has blamed informal social gatherings, and not stores and their consumers, for the rising infection rates.

“If the business community isn’t causing the spread, this isn’t going to stop the spread,” DiPentima said. “All this is going to do is cause economic damage.”

Though he opted not to order a statewide return to Phase 2 on Thursday, Lamont warned that might not be far off.

The governor tried to offer some hope as well Thursday, saying that while the latest infection rate is no fluke, “I’m not an alarmist. We’re going to come down from that number.”