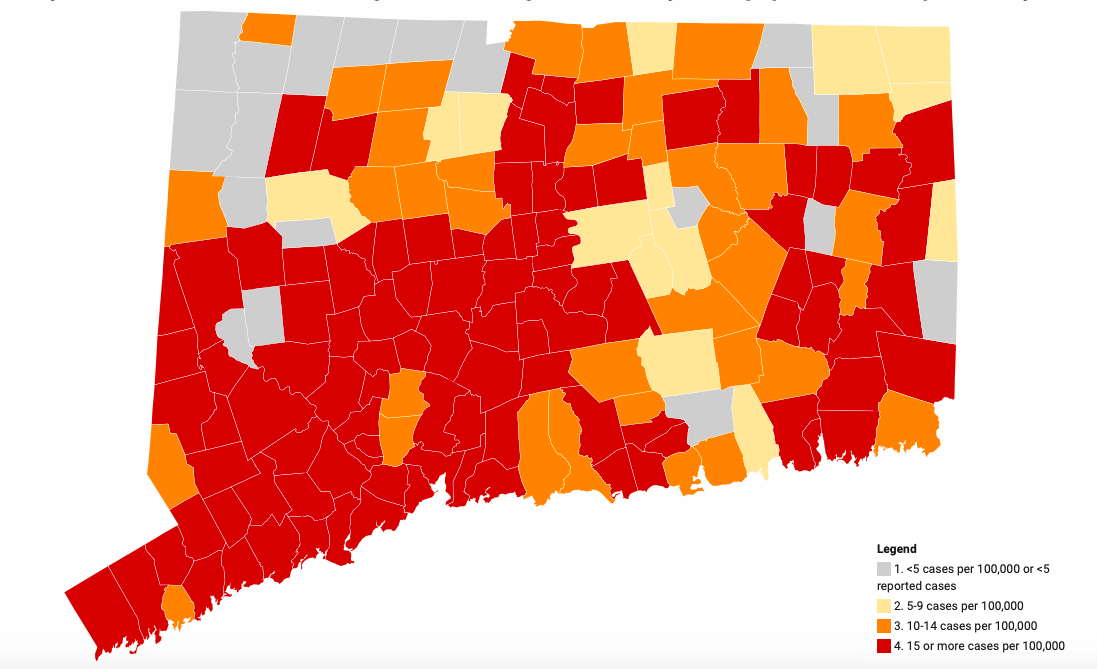 The autumn surge of COVID-19 cases has reached red-alert status in 100 of Connecticut’s 169 cities and towns, with the state’s largest city, Bridgeport, now experiencing the worst outbreak — and with hospitalizations for the disease statewide more than doubling in the past two weeks.

A subdued Gov. Ned Lamont outlined the latest metrics Thursday in the second of his twice-a-week televised briefings, joined by a medical adviser, Dr. Scott Gottlieb, who warned that all epidemiological models indicate cases will continue to increase into the new year.

“I think this is the final stage of the acute phase of this pandemic that we need to get through,” said Gottlieb, the former head of the Food and Drug Administration. “Unfortunately, it’s going to be the hardest phase right now. We’re in for a very difficult two to three months.”

The rolling seven-day average of positive results in COVID-19 tests in the state was 4.4%, but another 33 people were hospitalized for COVID, increasing the daily census to 617 — up from 270 two weeks ago, but far below the peak of 2,000 during the first surge of cases.

Fourteen states reported record COVID-19 hospitalizations Thursday, with the seven-day average of new cases reaching highs in 23 states, according to data tracked by the Washington Post.

Lamont and Gottlieb said they were was less concerned about hospital capacity in Connecticut than the availability of sufficient medical personnel. In the spring and summer, medical personnel were able to go to hotspots like New York City.

“Last time around, we could bring in nurses and specialists from elsewhere,” Lamont said. “There is no elsewhere right now.”

“Now, what we’re seeing is a truly national epidemic where every part of the country is going to be simultaneously engulfed in infection,” Gottlieb said.

Connecticut is better positioned to withstand the latest surge than during the original spread of the novel coronavirus in March, when therapies were limited, the in-hospital mortality rate high and the health care system approached capacity, Lamont and Gottlieb said.

Gottlieb said in-hospital mortality rates have dropped as doctors have used months of experience with novel coronavirus to change treatment regimens, primarily by the aggressive use of steroids, supplemental oxygen and remdesivir, an anti-viral that does not cure COVID-19 but can lessen its impact by hampering the replication of the virus in the body.

Lamont tightened COVID-19 restrictions a week ago, limiting the hours and capacity of restaurants and other public venues. The state now has 200 COVID-19 testing locations, but delays have been reported, primarily due to periodical shortages of collection material, not laboratory backlogs.

The state now is able to trace 98% of people exposed to COVID-19 within 48 hours and reach 65% of them. In addition to the tracing, the state is now promoting a smartphone app that can inform people if an infected person had been in close proximity with them.

Contact tracers offer infected persons a code to be entered through the user’s app. Once entered, other app users who come within 6 feet of that person for more than 15 minutes will get a notification they have potentially been exposed.

The app will not reveal who that person was, nor will it inform health officials of who else might have been exposed. The app, which has been used in other states, is meant to supplement contact tracing, not replace it.

Gottlieb said the disease might finally be tamed in 2021. At the current rate of spread, at least 30% of the U.S. will have had the disease, slowing transmission. And mass vaccinations might be available next summer.

It sends an anonymous alert to your phone anytime your device has come into close proximity to another person with COVID-19 – all without sharing any personal information.

He also said the public is growing more educated and cautious about the disease.

“As much as people are getting exhausted, they’re also getting smarter,” Gottlieb said.

A reporter challenged that assertion, noting that there is an anti-mask movement and that the White House has been a COVID-19 hotspot. President Donald J. Trump has ridiculed the wearing of masks, and the president and 14 people in the president’s circle have tested positive.

“Well,” he said, “some people are getting smarter.”