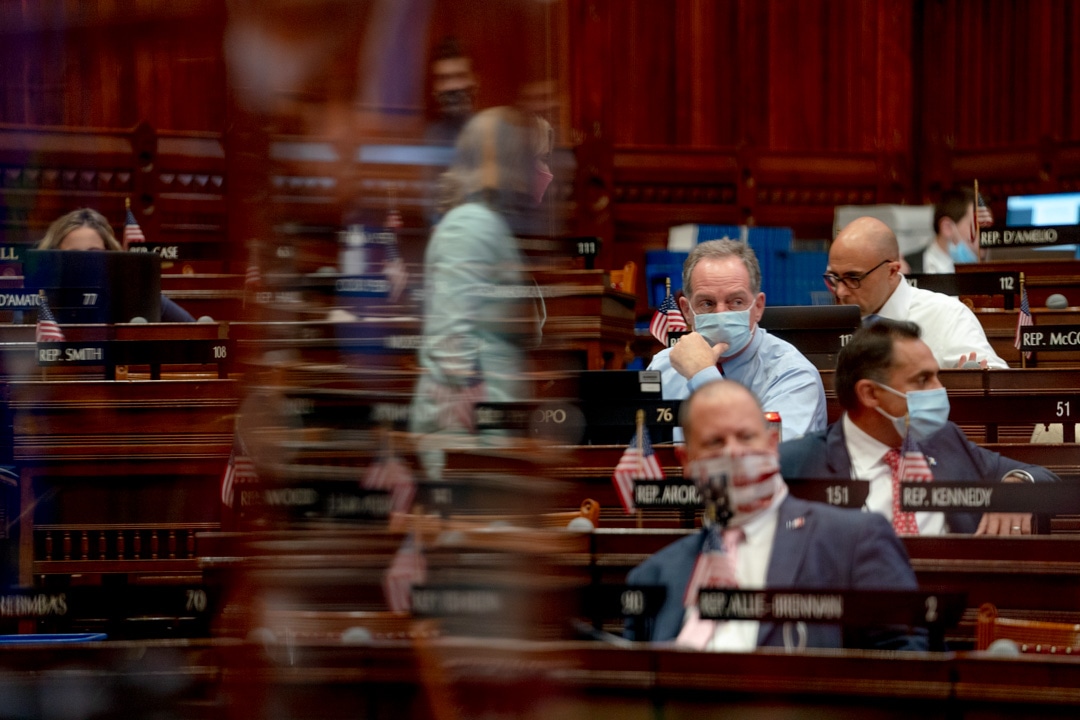 Rep. Craig Fishbein in the front row at a special session in July.

It hasn’t been a good two weeks for counting, or at least recording, votes in the 90th House District of Cheshire and Wallingford. One mistake by Wallingford crowned the wrong winner the day after the election. Now, it turns out the results of a recount were inaccurately entered into the state’s election management system on Friday by Cheshire officials.

Numbers uploaded to the online election system after the recount showed Rep. Craig Fishbein, R-Wallingford, with a 17-vote win over Democrat Jim Jinks of Cheshire. But at 11:58 a.m. Monday, Cheshire revised its numbers, trimming Fishbein’s victory to just seven votes.

Cheshire increased Jinks’ tally by 27 votes and Fishbein’s by 17, a net gain of 10 votes for the Democrat — just enough to make it a closer loss, not a victory.

Tom Smith, the Democratic registrar of voters in Cheshire, said Tuesday that the recount accurately tallied the votes, but a relatively small number of hand-counted ballots were not included in the numbers posted on the elections site maintained by the Secretary of the State’s office.

“It was a post-recount bookkeeping error, which we corrected immediately,” Smith said.

The revision is likely to send another jolt of hope among supporters of President Donald J. Trump who see any election anomaly or error as evidence of a fallible election system. The discovery of the initial mistake by Wallingford, which flipped the result, made news on the conservative news site, Breitbart.

An error changing a result was dramatic, but the number of votes changed was relatively small.

Trump is trying to flip the results in several states, where the margins of victory ranged from 11,000 to 140,000. No statewide recount in modern history has changed a result where the initial margin of victory was more than a few hundred votes, and the president’s campaign has failed to produce convincing evidence of fraud or errors.

The winner has been declared in every state but Georgia, where a recount is underway. Joe Biden is leading there by about 14,000 votes. Without Georgia, Biden has won the popular vote by 5.7 million votes and the electoral college vote, 290 to 232. Winning the presidency requires 270 electoral votes.

“Ultimately, comparing my situation to that which is going on in other states is not appropriate,” Fishbein said Tuesday. “This race has been all over the national news. It’s a different situation. Totally different.”

The bookkeeping error after the recount was the final twist on a post-election roller coaster for Fishbein.

On the day after the election, Fishbein said, the results showed him losing by a convincing 330 votes. He had made what he thought was a final trip to his office at the Legislative Office Building that day. His wife accompanied him.

On Nov. 10, exactly a week after the election, he learned that Wallingford had failed to upload results in his race and a state Senate race from one of the nine polling places in the district. With the missing district added to his tally, his 330-vote  loss turned into a 21-vote win, close enough to require an automatic recount under state law on Nov. 12 and 13.

The revisions made Monday by Cheshire to add the hand-counted ballots produced the current, and presumably final, tally of 7,055 for Fishbein and 7,048 for Jinks, a 7-vote win.

Connecticut uses paper ballots that are counted by optical scanners. Some ballots must be hand counted when are not readable by the machine.

Rep. Matt Ritter, D-Hartford, and Rep. Vincent J. Candelora, R-North Branford, the new leaders of the House Democratic and Republican caucuses, said Tuesday that the latest glitch does not change their mutual conclusion: Fishbein won and will begin his third full term in the Connecticut House on Jan. 6, when the 2021 session begins.

Fishbein said the initial Wallingford mistake was discovered by Democrats working for a state Senate candidate, April Capone. They noticed missing legislative numbers. Fishbein said the experience exposed a weakness in the reporting system: An entry of zero votes in any race should be flagged by the system.

Jinks could not be reached.

Smith, the registrar, said the system has checks and balances: that’s how the mistake in the 90th were caught.

“People should be confident,” Smith said. “You have so many eyes on it, the results will out.”