More than 75,000 COVID vaccines administered in CT, among top rates in US 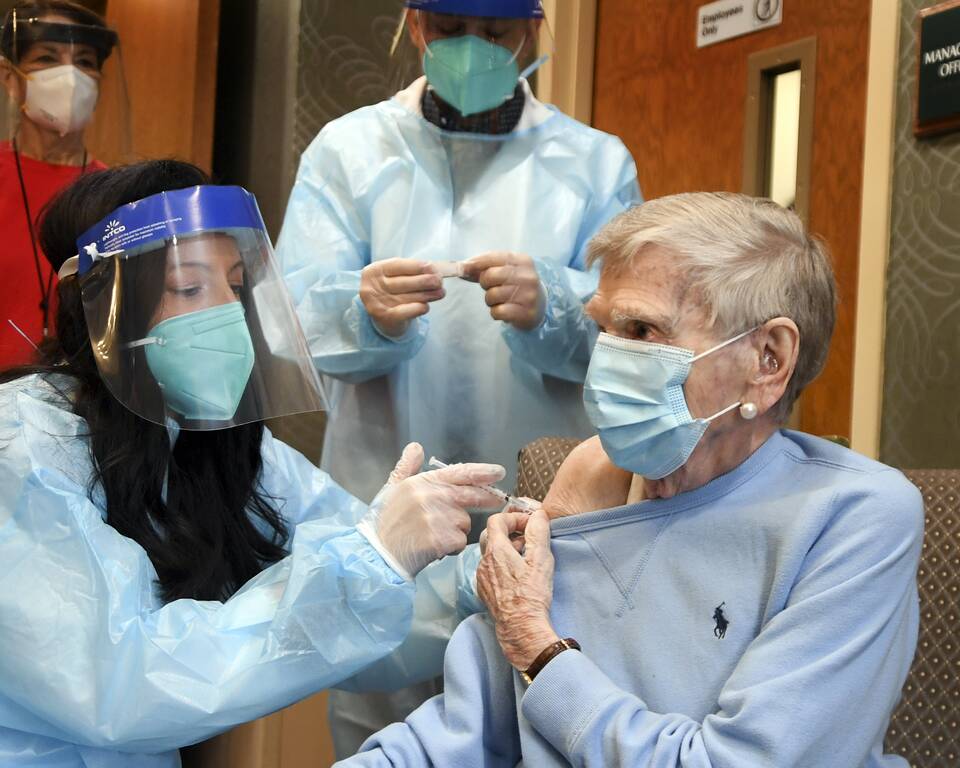 Jeanne Peters, 95, a resident at The Reservoir nursing home in West Hartford, receives a COVID-19 vaccine. The Reservoir was among the first nursing homes in Connecticut to begin vaccinating its residents against coronavirus.

Gov. Ned Lamont said Monday that by the end of the week, all residents and staff in Connecticut’s 211 nursing homes who wanted an initial dose of the COVID-19 vaccination will have received it.

Workers and residents who were not able to get the shot or who decided against it during the first round will still have an opportunity to be vaccinated, however. Walgreens, CVS and other pharmacies that have partnered with nursing homes in the vaccination effort are expected to make a total of three stops at the facilities.

Lamont’s administration said it did not have a tally of the number of nursing home residents and employees who have received the shot so far. The state said it is waiting for Walgreens, CVS and other providers to report that data to federal agencies.

“We are expecting to get that split out from CVS and Walgreens through the federal systems,” said Josh Geballe, the state’s chief operating officer. “We don’t have it yet.”

Based on anecdotal reports, Lamont said a wide swath of nursing home residents appears to have received an initial dose of the shot.

“I am told that the overwhelming [number] of residents are eager to get the vaccine and are getting vaccinated,” he said. “I understand there is a little more hesitancy when it comes to some of the nurses. Most are getting it, but not all.”

As providers make the rounds again at nursing homes, the governor said the state has launched an “aggressive public outreach campaign” to try to persuade reluctant workers to get the vaccine. That includes commissioning a public service announcement, working with unions that represent the employees and encouraging staff to talk to colleagues who already have received the immunization.

“We believe the data are so clear about how safe and effective the vaccine is,” Geballe said. “It’s really about making sure that people are hearing from folks they know, that they trust.”

Some hospitals that administered their first doses to front-line health care workers in mid-December began giving out their second doses of the vaccine Monday. Assisted living facilities were expected to begin vaccinating their residents and staff.

As of late Sunday, the state reported that 75,180 doses had been administered in Connecticut. Federal data from Monday evening put the total at 75,946. That’s about a third of the people in phase 1a — front-line health workers, nursing home residents and staff, and first responders — that the state had estimated would opt to receive a vaccine. Officials have said that people in phase 1a are expected to receive both doses of the shot by the end of January.

Connecticut is one of the first nine states in the country to vaccinate more than 2% of its residents, federal data show.

The state recorded a daily positivity rate of 5.29%, down from 7.06% on Saturday. Fifty-five more people were hospitalized, bringing the state’s total to 1,111. As of Monday, 6,168 people had died of COVID-19 in Connecticut.