A chatty State of the State, prerecorded in a pandemic 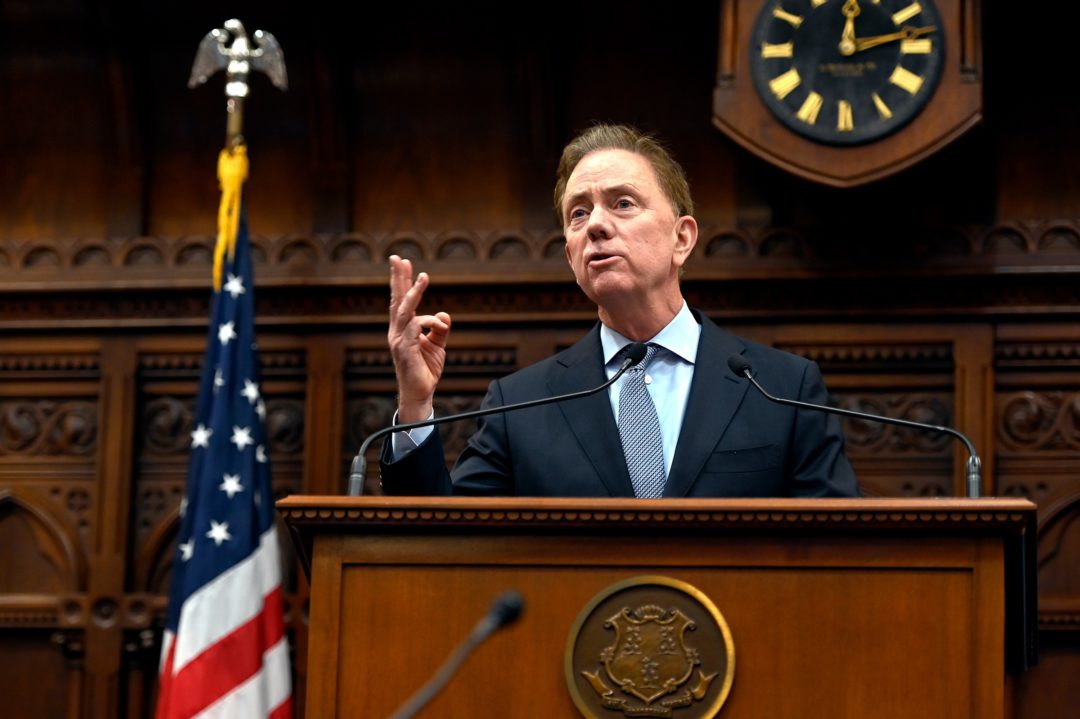 Pre-COVID: Governor Ned Lamont started off the 2020 legislative session with a State of the State address at the State Capitol before a joint session of the House and Senate. This year, his address was virtual.

Gov. Ned Lamont opened his third year in office Wednesday with a recorded State of the State Address broadcast to a largely empty State Capitol and a state still partly closed due to COVID-19 restrictions.

“Every day, we are reminded that we are all in this together, and like any large family, we must look out and care for one another,” Lamont said, seated at his desk in the Capitol.

Normally, the governor would speak to a joint session of the General Assembly in the crowded, even raucous House chamber. It’s a big room that calls for energy, typically helped by choreographed applause lines.

It was recorded Monday, before anyone could envision the chaos that would come Wednesday in Washington as supporters of President Donald Trump stormed the U.S. Capitol.

The video presentation played to Lamont’s strengths and downplayed his weakness as a late-in-life politician who rarely attempts oratorical high notes. His speeches are conversational, but they have connected in the crisis.

“Two years ago, I introduced my family to you – adding that Annie and I consider Connecticut like an extension of our own family,” Lamont said. “After ten months of COVID, that is truer today than it was ever before.”

He paused to remember those who have died from COVID, 6,192 and counting in the state, all “members of our Connecticut family.”

It was not a policy speech. He glossed over issues, throwing down markers on a few.

“Sports betting, internet gaming, and legalized marijuana are happening all around us,” he said near the start of the address. “Let’s not surrender these opportunities to out-of-state markets or even worse, underground markets.”

Lamont’s commitment to pushing those issues through the legislature remains to be seen. His staff promises that he will put a gambling bill on the table, rather than try to rely on the results of continuing negotiations with the state’s tribal gambling partners.

“In this coming year, we will be expanding our commitment to affordable housing, access to broadband, transit-oriented development, open choice school incentives, as well as an expansion of our workforce development and small business growth fund,” Lamont said towards the end of his speech. “That’s how we get Connecticut growing again, and working for all of our families, with liberty and justice for all.”

He spent more time looking backward, recounting successes, than forward with promises for change. Twelve times, he used the words “two years ago,” a point of reference to where Connecticut was and what has happened since.

Two years ago, the state passed a paid family and medical leave law; it passed a law raising the minimum wage in phases to $15; and it managed to bank $3 billion in a rainy day fund.

“Two years ago, the Wall Street Journal asked, ‘What’s Wrong with Connecticut?’ Now, commentators across the country are applauding our budgetary approach,” he said.

His speech reflected a governor whose reflex is to see the upside, especially in bad times. He grew up in privilege, a scion of wealth who built a company, and is married to a successful venture capitalist. Their world is crowded with people confident they can make things work.

Over the 10 months of the pandemic, the Democratic governor has found a father-in-chief vibe, one that has raised him from among the least popular governors to one ranked highly in polls.

He turned 67 on Sunday, two days into the New Year. He bid goodbye and good riddance to 2020, even though he shined in that awful year, not 2019.

His speech riffed on his governing style. He reminded lawmakers that his office was a place where the door is always open, and new ideas are welcome. It rarely worked before the pandemic, when he struggled in his relationship with the legislature.

During the pandemic, he has had a freer hand. He has brought in outsiders. A prominent Yale scientist and a retired corporate chief executive officer led his advisory group on how to slowly and safely reopen Connecticut.

“Some of those very members are now advising the president-elect,” Lamont said.

He is proud of doing well with the neighbors. He gave a nod to his first-name friends: Gina from Rhode Island, Charlie from Massachusetts, Phil from New Jersey and, of course, Andrew from New York.

Last year, Lamont signed a police accountability bill passed in special session after the death of George Floyd, a Black man who died under a white police officer’s knee in Minneapolis. Wednesday, he reflected on what that meant.

“Racism is another virus which knows no borders. Following the tragic deaths of George Floyd and Breonna Taylor, our nation and our state found itself at a historical moment of reckoning – forced to finally confront the hard truths of racial inequality and injustice – but protests are only meaningful if they are a call to action,” he said.

Lamont quickly pivoted to a celebration of how Connecticut protested Floyd’s death.

“Unlike the violence which jarred protests in other states, our protests highlighted the best in Connecticut values– with black and white, suburbs and cities, police and protesters locking arms in a common cause,” Lamont said.

The governor also ran through how Connecticut has handled the challenges of the pandemic. A highlight was how the state, with the support of a wealthy philanthropic couple, Ray and Barbara Dalio, provided laptops to students studying remotely.

“When the pandemic struck, we worked together – public, private, and nonprofits – to solve this digital divide,” Lamont said.

President-elect Joe Biden then appeared. It was a clip from his announcement that Miguel Cardona, the state commissioner of education, was his choice for secretary of education.

“Dr. Cardona has brought his heart, his knowledge, and his passion for education to bear on behalf of the students across Connecticut,” Biden said. “And when that pandemic struck, he was ready. He helped secure more than 140,000 laptops, more than 40,000 internet connections for students who lack them.

“Because of him, Connecticut became the first state in the nation to ensure that every single public school student was equipped to engage in remote learning regardless of family income.”