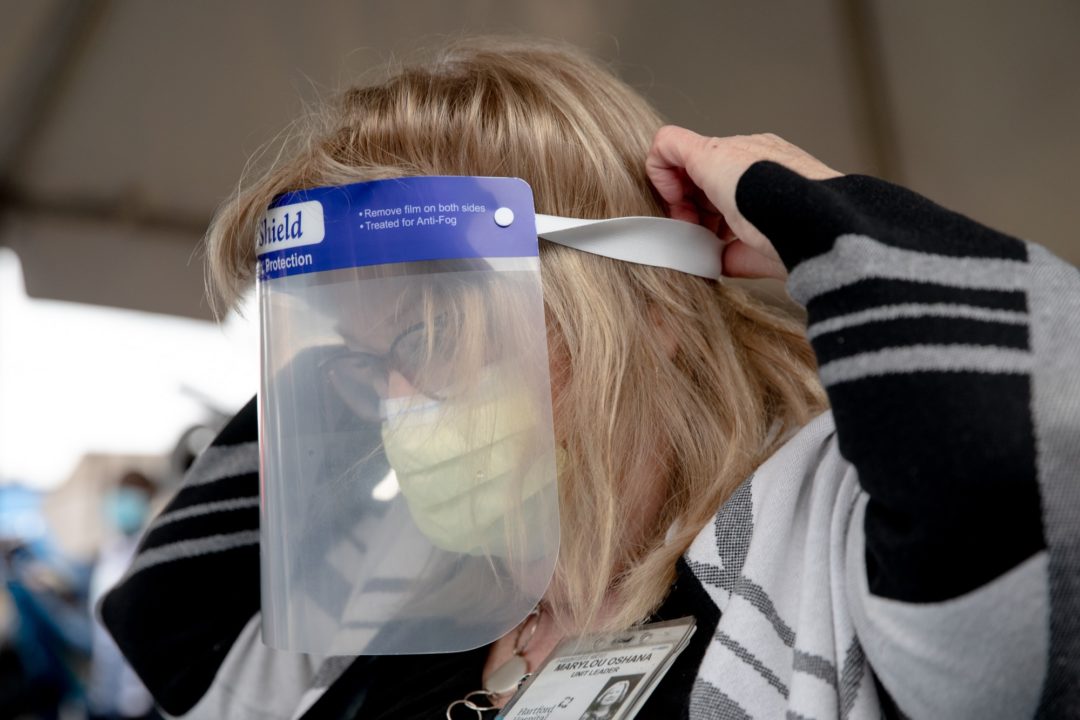 Marylou Oshana, clinical supervisor at Hartford HealthCare, puts on a face shield before the distribution of the Pfizer BioNTech COVID-19 vaccine.

Two New Haven County residents under the age of 25 have tested positive for a new, more transmissible variant of SARS-CoV-2, the type of coronavirus that causes COVID-19.

Medical experts say this variant, scientifically labeled B.1.1.7 and first discovered in the United Kingdom, appears to spread more easily and quickly. But the U.S. Centers for Disease Control and Prevention states that “there is no evidence that it causes more severe illness or increased risk of death.”

“Given the speed of this new strand of the virus and its identification in several states throughout our country, we presumed it was already in our state,” Gov. Ned Lamont said in a press statement Thursday. “This information this morning confirms that fact.”

The confirmed cases in Connecticut are in two people between 15 and 25. They each recently traveled to Ireland and New York, respectively, and developed symptoms within three to four days of their return, according to state officials.

Testing samples taken from each resident earlier this month ultimately yielded positive results. Genetic sequencing of the virus was used to confirm that the two cases are unrelated.

“Not everyone who tests positive will know whether they have this particular strain of the virus,” state Department of Public Health acting commissioner Deidre Gifford said in a statement, “so it is imperative for people to continue to follow all the public health guidance – continue to wear masks, social distance and avoid gatherings with anyone outside your household.”

The SARS-CoV-2, B.1.1.7, variant is associated with a rise in cases in the U.K., which has just entered a national lockdown in an attempt to control the outbreak.

The variant has so far been detected in more than 27 countries and at least five other U.S. states, according to the CDC.

Contact tracers interviewed both Connecticut residents with the virus variant shortly after they were diagnosed, as well as their recent close contacts.

Scientists are currently reviewing how well current COVID-19 vaccines authorized by the U.S. Food and Drug Administration last month will protect against the U.K. variant and a second variant appearing across South Africa.

Researchers and health experts believe that the vaccines currently being administered and manufactured by Moderna and Pfizer-BioNTech will work.

“Our current vaccines should be effective against this [U.K.] strain,” Gifford stated, “and we continue to urge everyone who is currently eligible to get the vaccine to do so.”

Dr. Syed Hussian, chief medical officer at Trinity Health Of New England, said having an established foundation for coronavirus vaccines can help if any changes need to be made.

“If the COVID-19 virus mutates like how the flu currently [does] on an annual basis, we have a solid mechanism to be able to give vaccine at very, very quick notice,” he said. “The MRNA technology can be redeployed within four to six weeks, depending on the virus that is more prevalent.”

The state Public Health Laboratory began an enhanced surveillance testing strategy last week in response to the emergence of new variants, officials said. The laboratory has partnered with Yale and Jackson Laboratories to do genetic sequencing on COVID-19 positive samples to parse out variants.