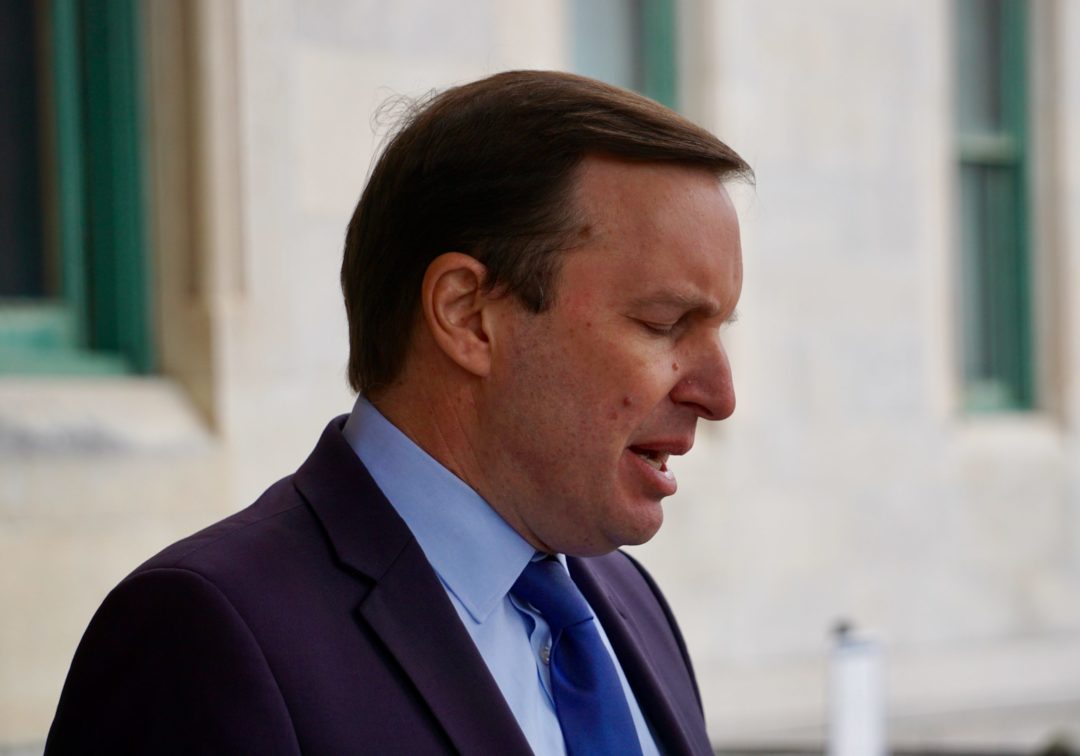 U.S. Sen. Chris Murphy: “I don’t think this insurgency is over.”

U.S. Sen. Chris Murphy, D-Conn., pressed the Pentagon on Monday to clarify and streamline the procedures for dispatching federal troops to the U.S. Capitol, saying the danger of insurrection persists and the failure to quickly defend Congress against a pro-Trump mob last Wednesday was unconscionable.

“To me, Wednesday is a before and after moment. We need to take a look at radical reform in the way that the Capitol is protected, in part because I don’t think this insurgency is over,” Murphy said. “Obviously, there are big questions about what these lunatics are planning for this weekend and next week.”

The fallout from the assault on the Capitol continued at a furious pace, with the House of Representatives introducing an article of impeachment accusing President Donald J. Trump of inciting violence with the intent of stopping Congress from formally accepting the Electoral College vote of 306-232 of Joe Biden for president.

A Quinnipiac University poll released Monday reported that Americans believe by wide margins that Trump and the congressional Republicans who tried to stop the certification of Biden’s victory were undermining democracy.

By smaller majorities, they favor Trump’s resignation or removal before Biden takes office on Jan. 20 at an inaugural Trump pledges to boycott, a stunning breach of precedent that underscores his unwillingness to accept the legitimacy of the election.

While much of Washington focused on the very real prospect of a House impeachment vote and the unlikely possibility of Trump’s removal by resignation or a Senate vote, Murphy and others turned their attention to ensuring the Capitol would remain safe during the inaugural and thereafter.

“On Wednesday, it was clear early on that the Capitol Police did not have the manpower or the ability to defend the United States Capitol from invasion and insurrection. And yet, it took four hours for the Department of Defense, specifically the National Guard, to get any kind of true presence to defend the Capitol from attack.” Murphy said. “That is unconscionable. That is unacceptable.”

Murphy, who is the ranking Democratic on an Appropriations subcommittee that oversees the legislative branch, made his request to the acting secretary of defense with two other Democratic senators, Martin Heinrich of New Mexico and Kirsten Gillibrand of New York. Gillibrand is the top Democrat on a Senate Armed Services subcommittee on personnel.

Chad Wolf, the acting secretary of homeland security until he resigned Monday, announced that security measures for the inauguration will begin six days earlier than planned, a recommendation of the Secret Service and a reflection of the “evolving security landscape.”

Murphy, who spoke to reporters outside the State Capitol in Hartford, made clear how deeply rattled Washington was by the siege of the U.S. Capitol.

In a story posted late Sunday night, the Washington Post quoted Steven Sund, who resigned as Capitol Police chief after his officers were overwhelmed, as saying he was rebuffed by House and Senate security officials when he asked that the D.C. National Guard be put on standby.

But Murphy said that was inconsistent with what Sund told him.

“It’s not consistent with my conversation with the chief,” Murphy said. “That’s not to say that his allegation isn’t true. But I spoke at length with the chief at 11 o’clock on Wednesday night and at 9 a.m. on Thursday morning, and in neither of those conversations did he mention he had wanted presence from the National Guard. And in fact, in both of those conversations, he defended to me the decision to go it alone without National Guard support.”

At an unrelated event in Hartford, Blumenthal said a Senate trial on an article of impeachment expected by the House was possible before Jan. 20, though unlikely. The evidence of incitement to insurrection, the article that was introduced, are the president’s tweets and his remarks to supporters on the Ellipse before they marched to the Capitol.

“There is ample time to do this trial before the inaugural,” Blumenthal said. “If the House votes on impeachment this week and approves it as we expect it will, the Senate could work through the balance of the week and over the weekend before the inaugural to hold that trial. The evidence is simple and straightforward. The President’s comments recorded by video make the case compellingly, beyond a reasonable doubt that he incited that riot. It’s a single article of impeachment.” 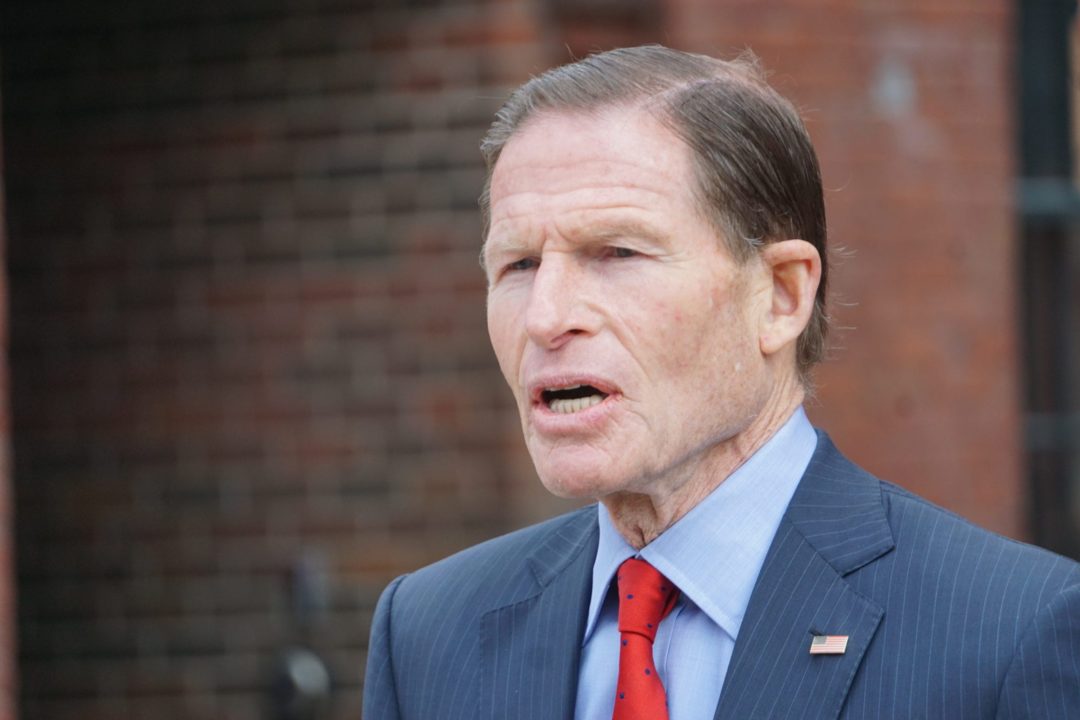 The House also intends to pass a resolution calling on Vice President Mike Pence to invoke the 25th Amendment of the Constitution and declare Trump unfit.

“His erratic behavior, especially his role in instigating violence at the Capitol and then abandoning his duty to restore order, raises serious doubts about his fitness as Commander in Chief,” U.S. Rep. Joe Courtney, D-2nd District, said in a statement. “It would be best for the country for the President to resign.”

The House Democratic majority has the votes to pass an article of impeachment, but Republicans control the Senate calendar until Kamala Harris takes the oath as vice president and can break ties in what will be an evenly divided Senate. If the Senate holds a trial, a two-thirds vote is necessary for conviction.

The Senate also could take up a trial after Trump leaves office.

“There really is an important principle and precedent here,” Blumenthal said. “The president violated the law, shockingly and sickeningly. And that kind of reprehensible misconduct cannot be allowed to stand without some accountability. And so I think there should be bipartisan condemnation of it, and conviction as a result of a Senate trial, even if it’s after the inaugural.”

The House could delay sending an article of impeachment for as long as House Speaker Nancy Pelosi chooses, as it did in Trump’s previous impeachment. By doing so, it could give the Senate time to confirm Biden’s cabinet nominations and, possibly, pass another pandemic relief measure.

In response to a question, Murphy said the Congress might eventually have to consider whether censure or some other action should be taken against the members of Congress who tried to stop the certification of the vote.

But that is an issue for another day.

“I think the immediate threat to the safety of the nation is the president of the United States,” Murphy said. “You know, these people follow his every word in a way that they do not for members of the United States Senate or the House of Representatives. So the president bears a special responsibility. His words have a special ability to incite. And it is why we are appropriately focused on whether we can have a peaceful transition of power with this president in office.”

Quinnipiac found a partisan divide in its new poll about whether the president was undermining democracy. Overall, by a margin of 60% to 34%, Americans say he was. But only 20% of Republicans shared that view, compared to 64% of unaffiliated and 95% of Democrats.

On the question of the behavior of rioters, there was universal condemnation.

Seventy percent of Republicans, 80% of unaffiliated and 90% of Democrats agreed that the individuals who stormed the Capitol were undermining democracy, not protecting it. And all groups viewed extremism as a “big problem.”