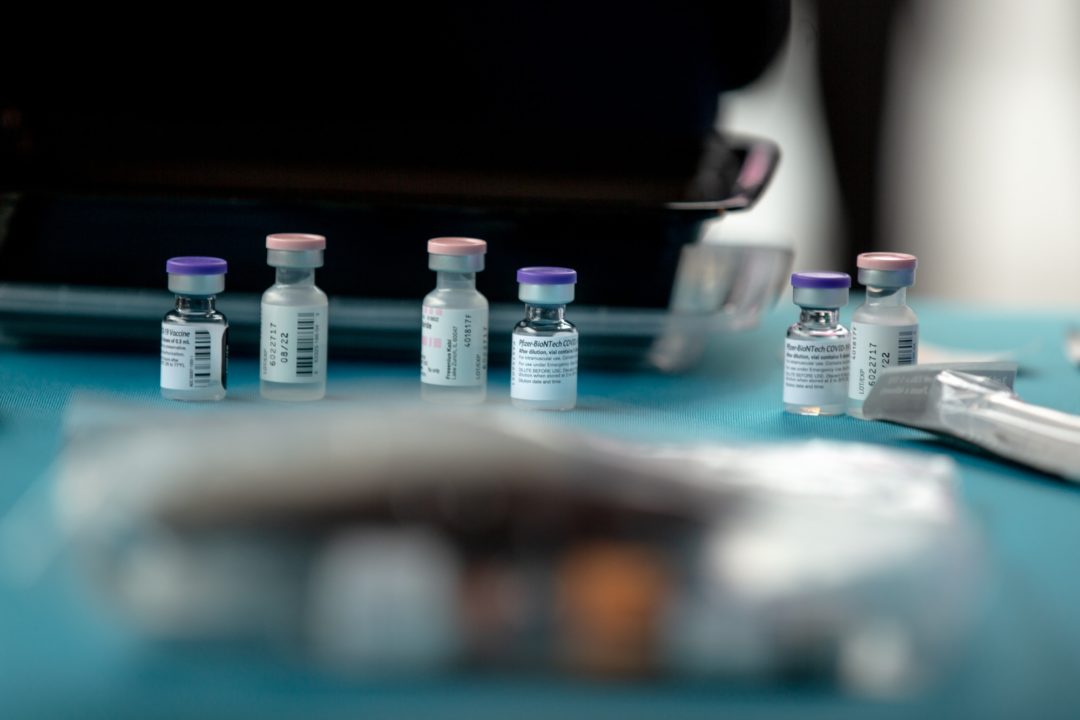 Pfizer bottles sit on a desk before the vaccine is administered.

The next group of people to receive the coronavirus vaccine in Connecticut should be expanded to include about 700,000 more residents — those aged 65 to 74 and those with comorbidities such as cancer, Down syndrome or chronic kidney disease who are 16 to 64 years old, an advisory group said Tuesday, echoing new federal guidelines that were announced earlier in the day.

To speed up lagging distribution across the country, the Trump administration on Tuesday called for everyone 65 and older to receive the COVID-19 vaccine. The administration also recommended that the immunizations be given to adults with underlying medical conditions like heart disease and diabetes.

News about expanding the vaccine came on a day when Connecticut’s daily positivity rate jumped to 10.7% — the highest it’s been since last spring — with 3,689 new cases of COVID-19 since Monday out of 34,422 tests. The governor’s office also reported another 31 COVID-related deaths Tuesday, bringing the total to 6,449; there are 1,154 people in the hospital with the disease.

Members of the allocation subcommittee of Connecticut’s vaccine advisory group urged the state to include people aged 65 to 74 in Phase 1B of the rollout, which is expected to begin next week. People aged 75 and older, those in congregate settings like prisons and homeless shelters, and “essential workers” such as teachers and grocery store employees are already part of that phase.

Advisory group members estimated that there are 350,000 people aged 65 to 74 and another 360,000 who have at least one underlying condition in Connecticut.

Since hundreds of thousands of additional people could soon qualify for Phase 1B, the panel asked officials with the state Department of Public Health to come up with a tiered approach – prioritizing each population in Phase 1B. So far, the state has given highest priority to people 75 and older, saying they will be the first group in Phase 1B to start receiving vaccinations next week.

The advisory panel also asked the health department to “explicitly address” issues of equity and the disparate impacts of COVID-19 in the next stage of its vaccine rollout.

“From the beginning, my position has been that we need to lower the [qualifying] age and be looking at individuals who have comorbid conditions as a way to bring equity into the conversation,” said Tekisha Everette, executive director of Health Equity Solutions and a member of the advisory group. “Following the federal government without our own data and our own considerations is a mistake. That doesn’t mean they haven’t thought of things correctly and accurately. It does mean that they have not been taken into context what’s happening here on the ground in Connecticut.”

Even as members supported the recommendations, some said the state must ensure secondary doses of the vaccines are available as Phase 1B is expanded. Federal health officials said Tuesday they would no longer hold back supplies of the vaccine to make certain that people who received the first dose get a second one.

Deidre Gifford, Connecticut’s acting public health commissioner, said it is unclear whether the state will get increased shipments of the vaccines in the coming weeks.

“What we’re missing in this conversation is a window into production capacity … that maybe we will get [doses] sooner rather than later,” she said. “Nobody is advocating not getting the second dose, let’s be clear about that. It may be that there’s some lengthening of the time period between the first and second dose.”

The additional populations suggested Tuesday will likely be included in Phase 1B; Gov. Ned Lamont has repeatedly said he will heed the advisory group’s recommendations. But members of the panel warned against promising too many residents doses of the vaccine if the state can’t provide them.

“I just don’t want to give too many people false hope that the vaccine is going to be there for them tomorrow or next week,” said Raymond Sullivan, director of health for the Brookfield Health Department and a member of the advisory group. “I am afraid that supply will not meet the demand.”