With limited supply, Lamont asks for patience on COVID vaccine

The latest timetable for COVID vaccinations in Connecticut.

Nearly 1.4 million Connecticut residents will be eligible for COVID-19 vaccinations in the next two months under Phase 1B, but the weekly supply from the federal government is limited to 45,000 doses, prompting Gov. Ned. Lamont to plead Tuesday for patience.

“We’re doing everything we can to get the vaccines out in a way that promotes public health and your particular safety,” Lamont said in the first of his twice-a-week COVID briefings from the State Capitol.

Phase 1A covered frontline health workers and nursing home patients, and the priority in the early weeks of Phase 1B is to inoculate residents 75 and older, to be followed next month by anyone 65 and older. That covers the most vulnerable demographic.

While only 18% of the population is 65 or older, 88% of all COVID deaths and more than half of hospitalizations have been people 65 and older. The death rate goes up from there; while only 7% of residents are 75 and older, that group accounts for 71% of deaths.

The focus of Lamont’s COVID briefing has shifted from updates about infection rates to the status of vaccinations that now have been administered to nearly 200,000 residents. There have been 196,753 first doses and 24,067 second doses administered so far in Connecticut.

The running seven-day average of positive tests has dropped to 5.3%, the lowest since early December. Hospitalizations are stable, and deaths seem to be slowing. There were 12 fatalities reported Tuesday, bringing the Connecticut total to 6,682.

Connecticut officials expect 75% of people in Phase 1B to seek the vaccine, which is about 1 million people. If the weekly supply increases to 50,000, it would take 20 weeks to administer a first dose.

Lamont said he had hopes a single-dose vaccine by Johnson & Johnson will soon be approved, giving the U.S. three available vaccines.

“I think you’ll hear something from J & J relatively soon, let’s say in the next two to three weeks,” Lamont said. “That’s a single dose. They could add on, you know, significant supply, which would accelerate a lot of the timetables we have right now.”

He also expects Moderna and Pfizer to increase production.

“Whether that takes three months or three weeks, we’ll find out,” Lamont said.

The state opened an appointment-only mass vaccination center in East Hartford this week, and it is broadening the effort to eventually offer vaccinations at community health centers and mobile sites.

The state has launched a website where qualifying residents can make an appointment and get the latest information. Appointments can be made online by filling out a form in the Vaccine Administration Management System (VAMS). People without access to a computer may call 877-918-2224 to schedule a vaccination.

Dr. Deidre Gifford, the acting commissioner of public health, said homebound elderly eventually can get the vaccine through visiting nurses and other home services.

“Many of our provider groups are reaching out and working with community agencies who work directly with the elderly, so that we can identify and have a provider partner go out to serve those people,” Gifford said 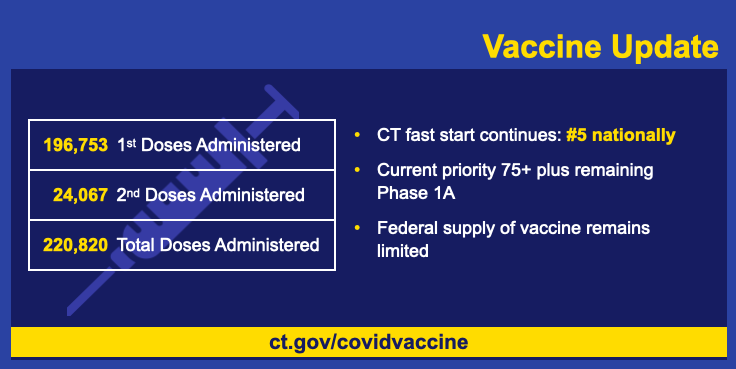 Status of vaccinations as the state moves from health providers and nursing home residents to anyone 75 or older.