Organizers say launch is 'imminent,' but provide no timetable 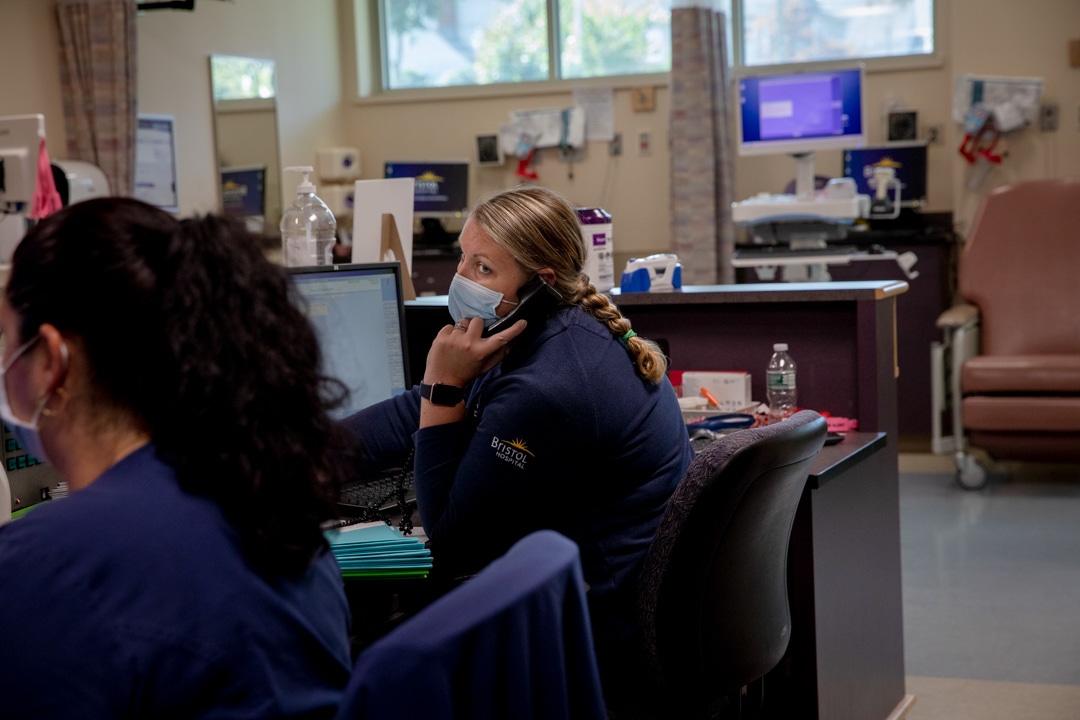 Kristin Levine, a registered nurse, calls a patient from Bristol Hospital. Connecticut is one of the few states that don’t have a broad health information exchange, a singular place where every practitioner involved in a patient’s care can access medical records.

Connecticut’s health information exchange, close to launching after years of delays and false starts, has signed 25 participants, including two of the state’s largest health systems, its organizers said Tuesday.

State officials and members of the nonprofit board overseeing the new health information exchange, dubbed “Connie,” had hoped to get the system off the ground in mid-2020 and then in the fall, but they have faced delays due in part to the pandemic. A top health official said Tuesday that the launch was “imminent” but did not provide a timetable.

“Connie’s capability to instantly share health information among providers in a confidential and secure manner is a major benefit to patients,” Jenn Searls, executive director of the exchange, said in an emailed statement. “As health care providers and their patients know all too well, limited health information at the point-of-care has been an obstacle to better patient care, better outcomes, and a more efficient healthcare system. By bridging the information gap and opening a channel to exchange valuable health information in real time, Connie overcomes that obstacle – ultimately improving the healthcare experience and outcomes for patients and providers.”

Health care practitioners will be required to participate in the exchange – a single repository of medical data that can be accessed by any provider involved in a patient’s care.

By law, hospitals and laboratories have one year to sign up once the exchange is deemed operational. Other providers have two years. The state has set up an email system so medical personnel who don’t have access to the right technology can communicate with the network until the infrastructure is in place. Funding is available for providers who need help connecting. Officials have said it could take two to three years to get everyone fully on board.

The launch of the exchange comes after more than a decade of failed attempts and shifting plans.

The first bid started in 2007 with a plan to build a network for Medicaid patients. But most physicians had not yet switched to electronic health records, and the state’s medical professionals weren’t ready for it.

A second attempt in 2011 – through the Department of Public Health and a quasi-public group called the Health Information Technology Exchange CT (HITE-CT) – got off to a stronger start but was mired in a legal battle and later folded. The third venture was overseen by the Department of Social Services and lasted 10 months, beginning in 2016. That effort also centered on Medicaid-based initiatives, while larger plans for a statewide HIE were left for those who spearheaded the fourth – and most recent – attempt in 2017.

After COVID-19 spread through Connecticut, health officials here – including then-director of the exchange Allan Hackney – lamented the system’s late arrival. The need for up-to-the-minute, robust patient information has become more pressing during the pandemic, and the lack of a broad health information exchange put the state at a disadvantage, they said.

Other states have used their systems to trace outbreaks in nursing homes, to identify COVID-19 hotspots in communities, to analyze data on race and ethnicity and to help agencies, like public health departments and regional health districts, access more extensive patient information in the midst of an emergency.

“I just wonder how many people could have been saved had we had this up and running,” Hackney, the state’s former Chief Information Technology Officer, told The CT Mirror in October. “How many health care workers could have avoided burnout if we had this data? I get very frustrated.”

A spokesman for Connecticut’s Office of Health Strategy said Hackney retired in December, though the CT Examiner reported that Hackney resigned.

Connecticut is one of the last states in the nation to launch a broad health information exchange.

Some states have a single network that serves all residents. Others, like Texas and California, have several regional HIEs that cover different pockets of the state. And a handful have started the networks but run into problems, forcing them to dissolve the systems and start over.

With the ability to aggregate data, HIEs have played a key role in disaster response efforts during floods, fires and hurricanes. Since COVID-19 moved into the country, the systems are being used to support contact tracing, track trends and direct resources.

Before the exchange can launch in Connecticut, privacy rules must be in place. Many of these networks have a so-called “opt-out” system, meaning patient data will be shared across the network unless a patient opts out. Only a handful of HIEs still have an “opt-in” system, in which data can’t be shared unless a patient consents. Leaders of health information exchanges say the opt-in policies are time consuming and unnecessary, since 95% or more of patients in those states end up opting in.

The Office of Health Strategy has said it is working on a policy that would follow the opt-out system. It will be subject to a regulatory process.

“Yale New Haven Health and Yale Medicine are committed to using data and technology to achieve excellence in patient care,” said Lisa Stump, senior vice president & chief information officer at Yale New Haven Health System. “Connecticut’s health information exchange creates a technology platform and data flows that enhance the ability for people and their care team to have a unified view of relevant data across all those settings to inform care decisions. We are committed to contributing to the data flow toward achieving these sought-after results.”