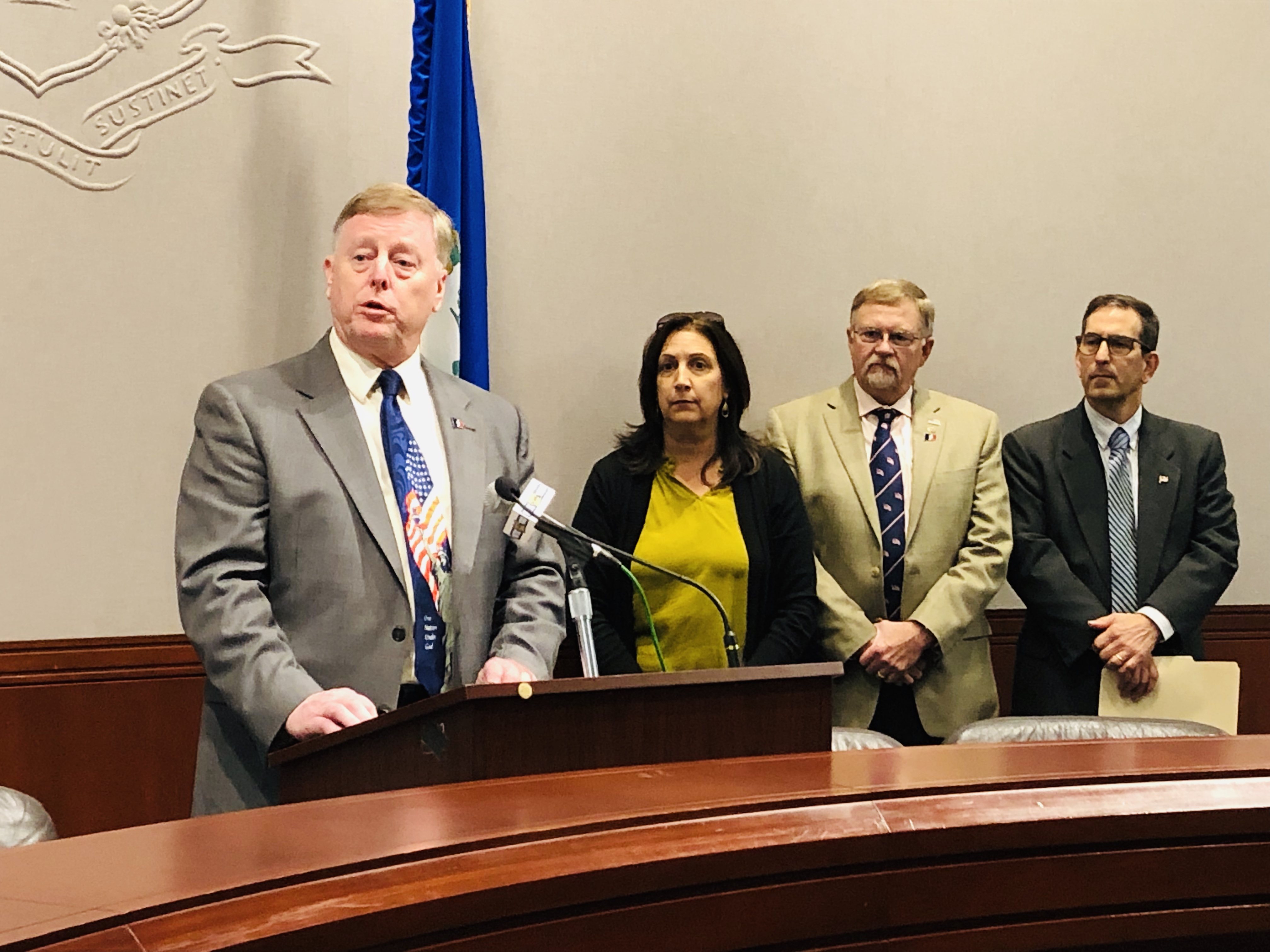 State Rep. Mike France, far left, and other members of the legislature’s Conservative Caucus speak out against a plan to repeal the religious exemption to vaccines in 2019.

State Rep. Mike France, R-Ledyard, has created a campaign committee that allows him to begin raising funds to run next year for the eastern Connecticut congressional seat held for the past 14 years by U.S. Rep. Joe Courtney, D-2nd District.

France is the best-known of three congressional challengers trying to get an early start on the mid-term elections of 2022. The two others are young Democrats hoping to force primaries from the left against U.S. Reps. John B. Larson of the 1st District and Jim Himes of the 4th.

France, a member of the legislature’s conservative caucus, is an electrical engineer and retired U.S. Navy officer whose last naval assignment was as a construction supervisor representing the Pentagon in the Virginia-class submarine program at Electric Boat.

Courtney is a well-positioned advocate for the submarine program as the chair of the Seapower and Projection Forces subcommittee of the House Armed Services Committee, a buffer against a Republican running on a promise to boost submarine production.

With the exception of a handful of self-funded candidates, Republicans have struggled to wage credible campaigns for Congress, despite holding three of the state’s five U.S. House seats as recently as 2006.

Courtney unseated Republican Rob Simmons in 2006, winning by just 83 votes. He has not had a close race since, winning with 59.4% of the vote in 2020. France was elected to the General Assembly in 2014.

Brian Merlen of Stamford created a candidate committee, Together Health, to run against Himes, the Democrat who unseated Shays in 2008 in the 4th District of lower Fairfield County. The Federal Election Commission returned the filing, noting by law it must include the candidate’s name.

In the 1st District of Greater Hartford, a neophyte named Muad Hrezi is trying to wrest the Democratic nomination from Larson, a high-ranking member of the Ways and Means Committee who was elected to Congress in 1998.

Hrezi, a substitute teacher and part-time patient companion who moved to Hartford last fall after two years in Washington on the staff of U.S. Sen. Chris Murphy, calls Larson a “corporatist Democrat.”