Westfield Care and Rehab in Meriden was one of four nursing home facilities in the state that served COVID-19 patients who did not require acute care hospitalization. The other facilities are in Bridgeport, Torrington and Sharon.

The state is closing the two COVID-19 recovery centers for nursing home residents in Meriden and Torrington because the number of infections has fallen to the point that they are no longer necessary.

“Athena Health Care Systems was pleased to partner with the state of Connecticut to operate COVID recovery centers in Meriden and Torrington to help some of our most vulnerable patients recover as well as keep our nursing home residents safe,” Athena Director of Marketing Timothy Brown said.

“We are pleased to say that we are now able to close both recovery centers. It really is positive news — it means that things are going in the right direction when it comes to this pandemic and that the recovery center model has worked.”

DPH is expected to keep using those facilities because they still have COVID patients, especially Riverside, which had 36 COVID-19 cases as of Wednesday. Quinnipiac had 10 and Greentree had six patients.

Westfield Care & Rehab Center, the Meriden facility, had seven patients, but Brown said they will all be returned to their original nursing homes by Monday.

The two stand-alone recovery centers have seen more than 320 patients since they reopened in October during the second surge, Brown said.

Unlike in the spring, when state officials only wanted COVID patients leaving the hospital to be sent to the recovery centers, nursing homes and assisted living facilities in the fall were allowed to transfer residents once they tested positive.

The quick transfer of positive residents allowed the state to get a better control over potential outbreaks during the second wave of the virus over the past few months.

The numbers of cases and deaths in long-term care facilities have been going down steadily as the number of vaccinations has increased. 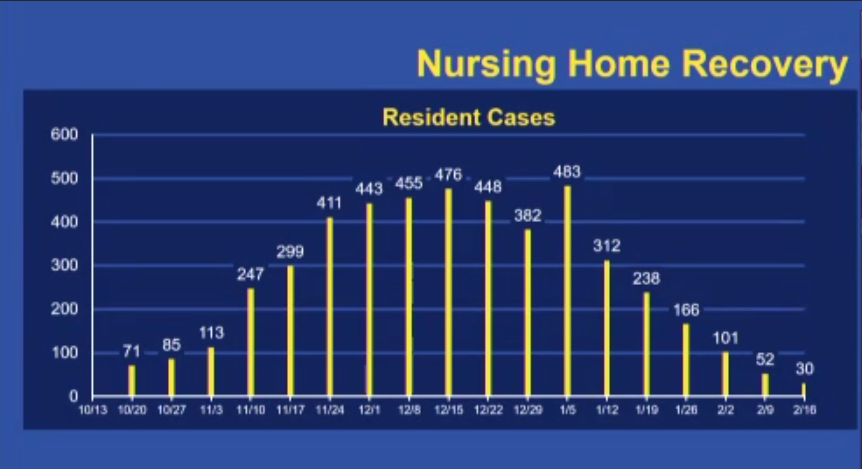 The vaccinations started in nursing homes on Dec. 18 at The Reservoir in West Hartford. At that time, the state had seen more than 400 infections in nursing homes for five weeks straight, and deaths had gone over the 100 per week threshold.

Nearly all nursing home residents have now received their second doses of vaccine under a federal program that tasked CVS and Walgreens with vaccinating long-term care residents and staff across the country. They are currently in the third round of vaccinations at most facilities.

While state officials haven’t released exact numbers, they have said over 90% of the roughly 17,000 nursing home residents have gotten vaccinated.

The percentage is lower with staff, although several providers said that they have seen an increase in staff members getting their first shot at the third visit and then scheduling their second doses elsewhere. The state is hoping eventually between 60-70% of the staff will be vaccinated.

Chris Carter, president of the Assisted Living Facility Association, said that anecdotally he believes the vaccination numbers are similar in those facilities as the ones in nursing homes.

“I think we can say that the declining numbers are definitely a good trend and that the vaccines are working,” Carter said.

Since many staff of nursing homes and assisted living facilities cross over, they are hoping more will get vaccinated, Carter said.

“Providers have tried to work around having employees that also work at other long term care facilities,” Carter said.

The Westfield nursing home facility in Meriden and Torrington Health & Rehabilitation Center, a shuttered nursing home that was reopened this year with support from the state, were among the four COVID-19 recovery centers that Athena operated for the state during the height of the pandemic in the spring.

The state paid Athena an extra $600 per COVID patient to cover the costs of purchasing PPE and paying staff higher wages for working with all COVID patients.

By the time state officials reopened the facilities in the spring, many providers had decided to just treat residents in their own facilities, so the numbers were sparse.