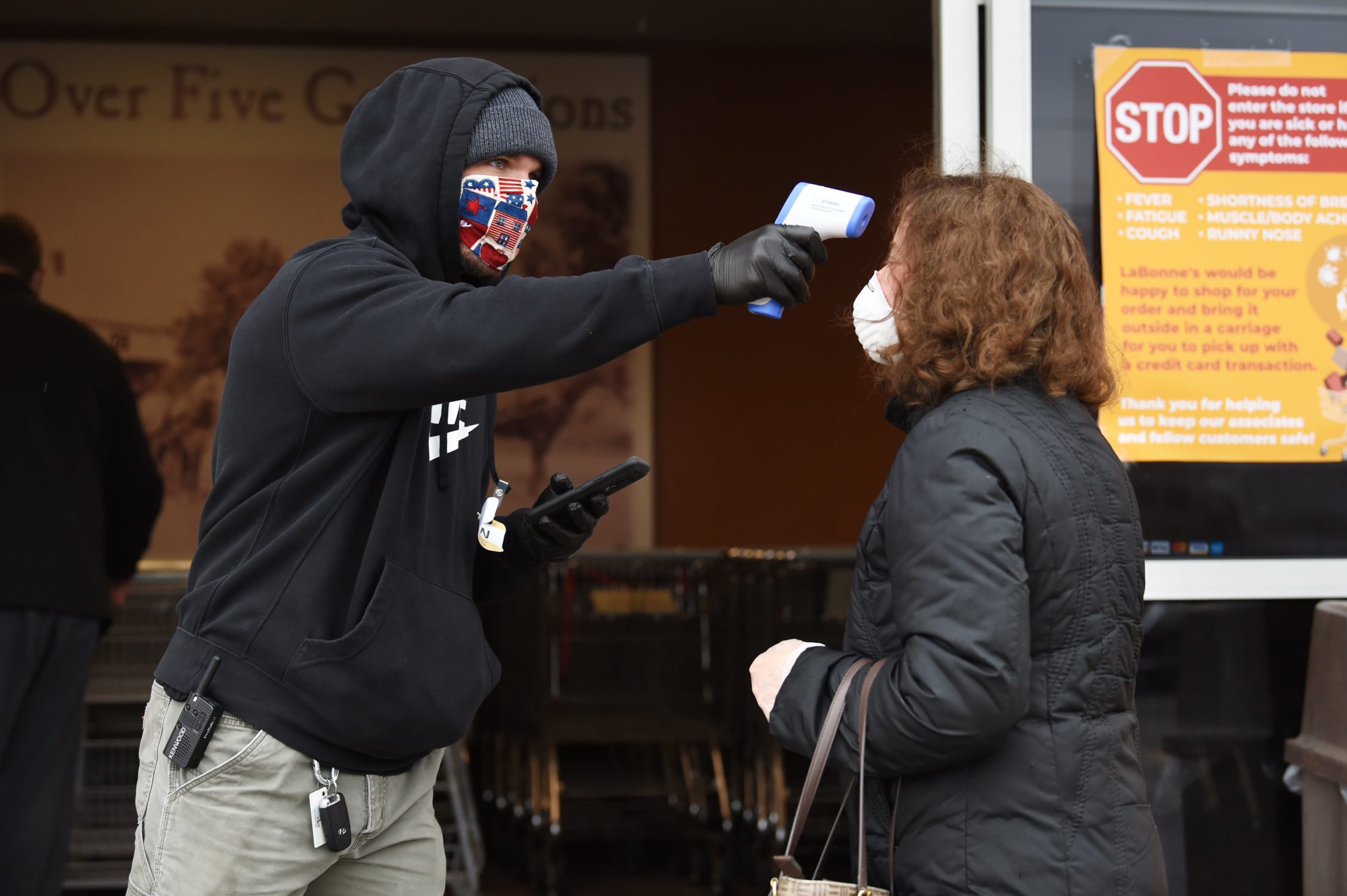 Danny Esposito, of Simsbury, (left) takes a customer’s temperature before allowing her to enter LaBonne’s Market in Watertown last spring.

Unions representing thousands of grocery store workers vented their frustration Monday night with Gov. Ned Lamont’s decision not to prioritize the group in the next wave of coronavirus vaccinations.

“We’re disgusted, we’re frustrated,” said Mark Espinosa, president of Local 919 of the United Food and Commercial Workers International Union, which represents about 7,000 Stop & Shop grocery chain employees in Connecticut. “They are front line employees. They are essential. Let’s face it, if they’re not in the stores, people are not eating.”

“In the first weeks and months of the pandemic, our members were considered heroes,” said Ronald Petronella, president of UFCW Local 371, which represents about 5,000 supermarket workers statewide.

Lamont abandoned the state’s previous methodology for a vaccination rollout, which had prioritized people with underlying medical conditions and certain types of workers in essential, high-risk jobs.

But the governor’s announcement Monday — which ironically was made the same day the national Food Industry Association celebrated “Supermarket Employee Day” — shifted to a priority system that is strictly age-based, with one exception: school employees and child care providers. The next round of shots will open March 1 to people who are between ages 55 and 64, teachers and others who work in schools, and day care workers.

Besides grocery story workers, the administration also had been considering giving priority in this next phase to transportation workers, as well as people 16 and older who have underlying health conditions like heart disease and diabetes, and teachers and other school staff. Only the last group is being given priority in Lamont’s new plan.

The governor said he would focus more vaccines on urban centers because of their larger populations. But some advocates also pressed for the next wave to place even more emphasis on cities, which not only have been hit hardest by COVID-19, but are home to many low-income residents who can’t afford quality health care or work retail or service jobs that can’t be performed remotely from home.

Lamont’s new approach drew sharp criticism Monday both from the CT NAACP and from the Connecticut ACLU.

“We agree with and are in solidarity with those calling out this plan as inequitable,” the ACLU chapter tweeted. “It is. Disability rights, racial justice and workers’ rights groups, we see you, and all the ways Gov. Lamont is leaving marginalized people behind.”

Espinosa asked, hypothetically, why a grocery store worker age 54 would not be prioritized when a healthy 55-year-old, with good health insurance and a higher-paying job that can be performed safely from home, is next in line for a vaccination?

Petronella added that more than 30,100 unionized grocery workers have been exposed or infected since the pandemic began, including hundreds of UFCW members across Connecticut.

“Those exposures lead additional employees to be quarantined from work, and each case has a widespread ripple effect,” he added. “There is also no way to count the number of customers exposed by each infected member. Getting our members who serve in these essential functions vaccinated as quickly as possible is imperative to the health of our entire state.”

[Who can get vaccinated against COVID in Connecticut, and when? Here’s what you need to know.]

The governor said other states, which have prioritized vaccinations by job title and by residents’ underlying health conditions, have struggled with confusion.

“I’m going to focus on the old business motto, KISS: Keep it simple, stupid, because a lot of complications result from states that tried to finely slice the salami and it got very complicated to administer,” Lamont said.

But Connecticut’s situation has not been without its own complications.

Lamont has acknowledged complaints about residents with ties to doctors and hospitals “jumping the line” and getting vaccinated.

Gian-Carl Casa, president and CEO of the CT Community Nonprofit Alliance, said many of the thousands of social workers employed by his members have been vaccinated. But, while he didn’t have specific totals, others still have not been recognized as essential healthcare workers.

Connecticut spends about $1.4 billion annually hiring community-based nonprofits to deliver the bulk of state-sponsored social services. Collectively that spending is close to the budgets for the Departments of Transportation, Motor Vehicles and Correction combined.

The alliance represents hundreds of nonprofits with about 190,000 employees — two-thirds of whom are in the human services field.

“It’s good news that there is enough supply and a plan to get more people vaccinated,” Casa added. “But we hope that frontline caregivers and the most vulnerable people they serve continue to be a priority.”