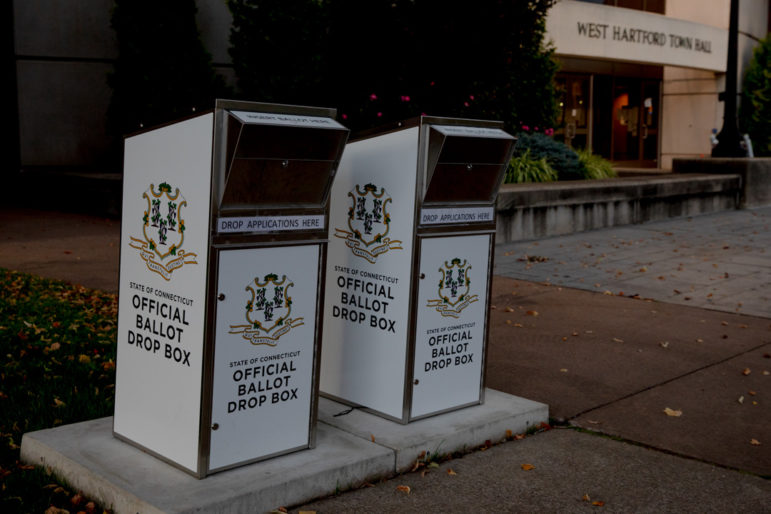 Absentee ballot drop boxes are located near the parking lot of the West Hartford Town Hall. Voters can return the ballot via the United States Postal Service, in person in the Town ClerkÕs office, or via the drop box that the Office of the Secretary of the State has provided to each town. The drop boxes are typically located outside of town or city hall.

Some members of the Republican minority in the General Assembly signaled Friday they will try to block fast-track action on a constitutional amendment that would allow no-excuse voting by absentee ballot.

The legislature’s Government Administration and Elections Committee voted 13-6 to approve and send the amendment to the House of Representatives, with all Democrats in support and all Republicans in opposition.

But putting an amendment before voters in a referendum on the next statewide election ballot in 2022 would require approval by two-thirds of the legislature this year, giving the GOP minority the ability to delay a referendum until 2024.

Without a supermajority, putting a constitutional amendment on the ballot requires passage by the legislature in successive  terms.

The committee debate pitted Democratic support for ballot access against Republican insistence on stronger protections against fraud, echoes of Donald Trump’s objection to the widespread use of absentee ballots — necessitated by the  COVID-19 pandemic — during the 2020 election

Connecticut is unusual in that its state constitution sets the terms for elections, leaving the legislature unable to pass state laws liberalizing the use of absentee ballots or permitting early voting.

Republicans said Friday they would support no-excuse absentee ballots only if Democrats agreed to a constitutional requirement for local officials to verify the signatures on the outer envelope of every absentee ballot.

Sen. Rob Sampson, R-Wolcott, the ranking Senate Republican on the committee, told Democrats that they need to compromise on the signature-verification issue if they want a referendum vote in 2022.

“We need to work together, and that requires give and take in both parties,” he said.

Democrats replied that adding prescriptive language to the constitution was contrary to one of the their primary goals, returning flexibility over election law to the General Assembly.

Rep. Matt Blumenthal, D-Stamford, said signature verification and other anti-fraud measures are the province of lawmakers, not locked in constitutional language.

The General Assembly passed a temporary law last year allowing anyone to use an absentee ballot in November, due to the pandemic. Gov. Ned Lamont issued an executive order making a similar provision for the primary in August.

The Connecticut Constitution empowers the General Assembly to set by law means to vote in cases of “absence from the city or town of which they are inhabitants or because of sickness, or physical disability or because the tenets of their religion forbid secular activity.”

By statute, the state had long interpreted “sickness” as a voter’s illness, not a concern about getting sick. With the executive order and the temporary law, the state asserted that the constitutional reference to sickness could encompass the pandemic.

Sampson complained Friday that the order and temporary law were unconstitutional, but he ignored a Connecticut Supreme Court ruling to the contrary.

The court upheld both Lamont’s order and the legislature’s temporary law, concluding that “sickness encompassed the existence of the pandemic and is not limited to an illness suffered by an individual voter.”

Republicans on the committee also voted as a bloc Friday against a resolution placing a constitutional amendment allowing early voting on the ballot, but the GOP is not positioned to stop the measure.