The power of incumbency: For now, Ned Lamont is tip-toeing towards re-election 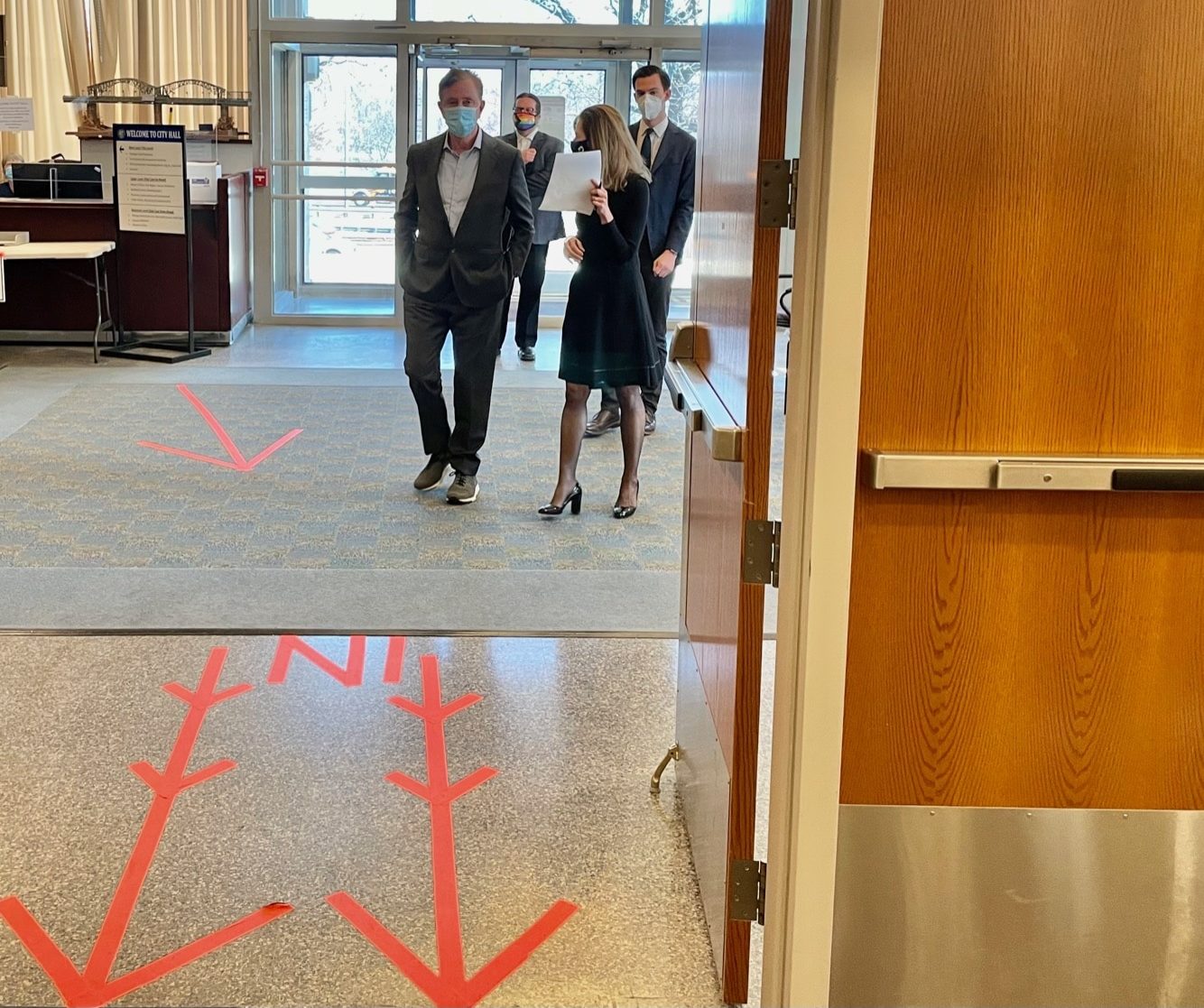 Gov. Ned Lamont campaigned Tuesday in Middletown, promoting the imminent arrival of free wi-fi from two downtown hotspots — and his administration’s role in providing it.

The governor is not a declared candidate. But a soft, undeclared campaign is underway, the advantage of every incumbent who has policies to promote, aid to distribute or a pandemic to fight.

Lamont has pivoted from talking about highway tolls, the issue that so quickly derailed his first year. He speaks now of the information superhighway, not the paved ones. Broadband is one of his synonyms for 21st-century infrastructure.

His stock line about high-speed internet putting Brooklyn, Conn., on equal footing with Brooklyn, N.Y., once prompted eye-rolls. But COVID’s push to remote work and learning changed that, bringing thousands of New Yorkers into Connecticut.

“If we’ve learned anything in this last year, we know that the virtual world is a lot more than downloading music and games — it is all about learning,” Lamont said.

He was in Middletown to promote a pilot program that will provide free wi-fi, starting Friday with two hot spots, one around city hall, the other around the library, and each with a range of about 100 yards.

Ostensibly geared to educational opportunity, it is funded by federal pandemic relief — itself another advantage to incumbent governors facing re-election in 2022.

The latest package, expected to reach the president’s desk this week, will send $2.6 billion to state government in Connecticut.

On Tuesday, his staff testified at a public hearing in Hartford in favor of Lamont’s more ambitious proposal to push cable and telecom providers to offer “equitable access to broadband” throughout the state.

Among other things, his proposed bill would require key agencies to “develop a plan and reporting requirements to produce up-to-date maps of broadband availability and upload and download speeds in the state.”

In Middletown, Lamont talked about broadband on a smaller scale at a press conference at city hall with the city’s young mayor, Ben Florsheim, and Lt. Gov. Susan Bysiewicz, a local resident.

Lamont was introduced by Larry McHugh, the president of the Middlesex County Chamber of Commerce since Ronald Reagan’s first term in the White House. McHugh is a promoter hard-wired for superlatives, especially as directed to elected officials.

“As I always say, the sun always shines in Middlesex County, and it is really shining today, bright as ever, thanks to our fantastic lieutenant governor, our great mayor, and I think the finest governor in our country,” McHugh said. “And I really believe that.”

Not even Lamont asserts such standing. But a new Sacred Heart University poll shows Lamont with a 56% approval rating, up from 31% a year ago. His handling of the pandemic is approved by 70% of Connecticut residents, McHugh evidently among them.

“I am so proud of the job that he has done with this COVID epidemic,” McHugh said. “His decisions have been disciplined, dedicated to making sure our community works in all ways.”

Roy Occhiogrosso, a consultant who was the top strategist in the election and re-election campaigns of Lamont’s predecessor, Gov. Dannel P. Malloy, was among them.

But no longer. Occhiogrosso now is among the Democrats whose default assumption is, unless Lamont signals otherwise, he will be a candidate for a second term in 2022.

“I don’t have any personal knowledge, but he certainly seems to be ready to run for re-election,” Occhiogrosso said.

Aside from fueling a rebound in the polls, the pandemic largely freed Lamont from the daily tussles with the legislature as he governed under extraordinary emergency powers. Also to his benefit, the Connecticut Republican Party has struggled during the Trump years, losing legislative seats in two consecutive elections.

The GOP has not won a statewide race or a congressional election since 2006.

“You’ve been governing by executive authority for a year. You have a strong approval rating, generally good reviews for handling an unprecedented crisis. You have no organized opposition. The Republican Party is all but absent. You don’t have to worry about fundraising,” Occhiogrosso said. “Why wouldn’t you run for re-election?”

Lamont said after the press conference that voters inevitably will judge him next year based on his handling of COVID.

“It’s been the dominant issue for the last 12 months to the day. But, you know, we did the broadband thing today just to say, ‘Other things are happening, too.’ So I think people take a look at what our vision is for broadband in this day,” Lamont said. “But let’s face it, the other 90% is COVID, right?”

Official campaigns are kicked off in moments traditionally marked by speeches and balloons but more recently in videos streamed on Facebook and Twitter.

Most campaigns have soft openings, outreach over coffees and phone calls. The precise moment of a campaign’s conception is rarely clear. For incumbents, the overlap in governing and campaigning is significant.

His budget address last month offered a framework of a campaign, as well as a budget. It was built around five bullet points: Defeating COVID, making Connecticut more affordable, investing in infrastructure, modernizing state government and economic growth.

Lamont is in no rush to formally open a campaign committee, a legal step necessary to begin fundraising. As a self-funder who provided about $15 million of his $15.9 million campaign budget in 2018, Lamont can launch his campaign from the shortest of runways.

He need only write a check.