For many with criminal convictions in their past, the ‘Clean Slate’ bill would open doors long closed 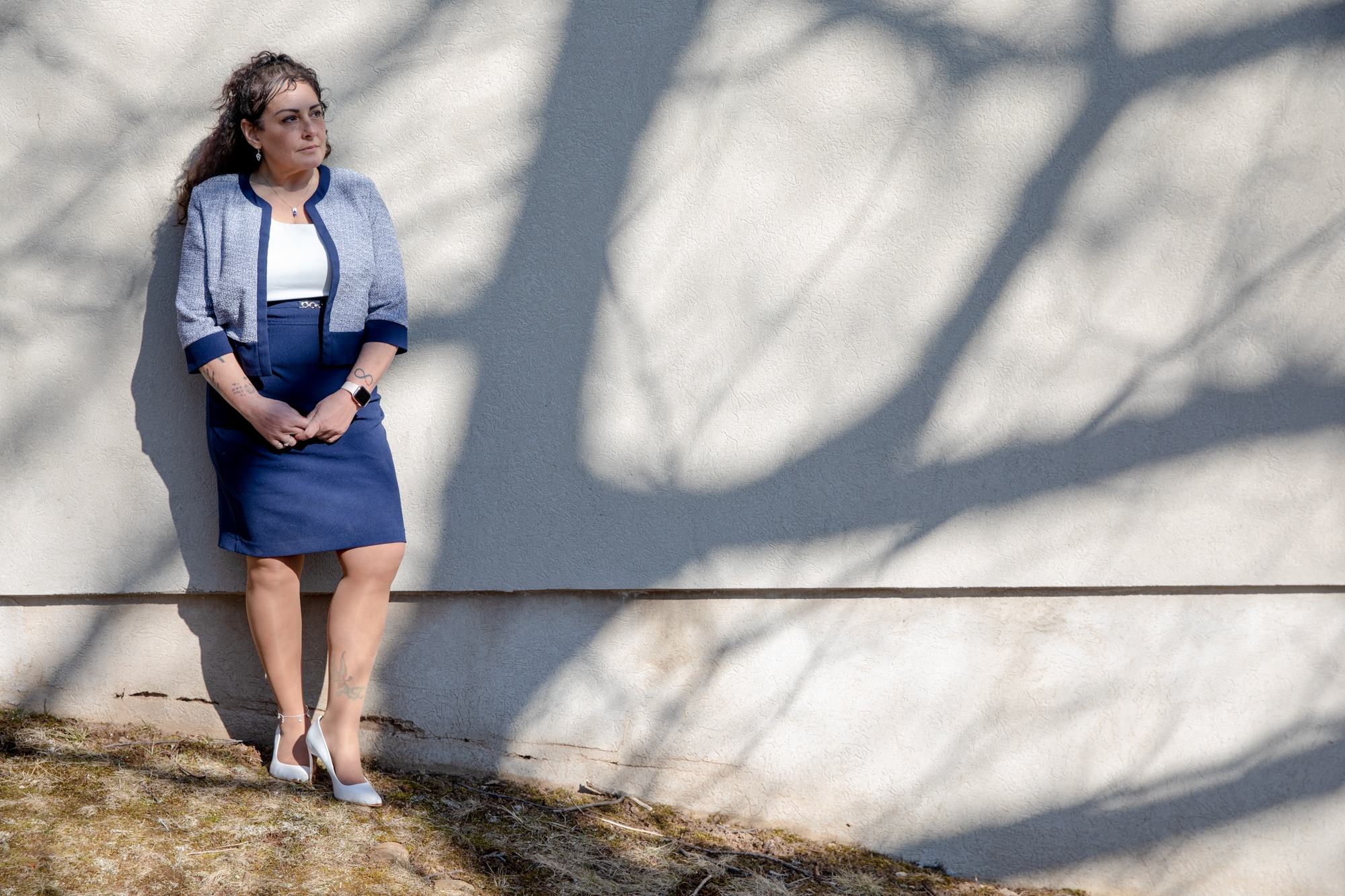 If the ‘Clean Slate’ bill is passed, Carrie Perez’s drug use records will be automatically expunged. “Freedom,” she said. “I’m free from addiction right now… I don’t wake up in the morning and think about drugs today. I’m thinking about school and work, but I can’t get a student loan.”

Carrie Perez didn’t realize she was homeless until someone asked her where she got her mail sent.

She’d run away from her Bridgeport home when she was a teenager. By the time she was 23, she was living on the streets, struggling with heroin use and in and out of jail for drug-related crimes. She said she has racked up 33 criminal convictions, all of which were related to her drug use.

“I would get some clean time, I wouldn’t get into trouble, I would relapse, and then I would go back to jail,” Perez said, who now is in long-term recovery from substance abuse. “That was the cycle for 25 years.”

Perez works full time as a peer support specialist at the Wheeler Clinic in New Britain, helping others with substance abuse issues, and goes to school at night. She’s on pace to earn her master’s of social work from Fordham University in the fall of 2022.

But she expects the state to deny her a social worker license because of her criminal record. She plans on appealing that decision, but it’s stressful having that hanging over her head, a reminder of the person she was before she went into recovery.

“I am going to get that denial letter,” Perez predicts. “Unless I get a pardon before then, it’s going to happen.”

A bill before the legislature could grant Perez some relief, ensuring her criminal record no longer holds her back. Lawmakers are holding a public hearing Wednesday to discuss a bill that would automatically clear certain criminal convictions from a person’s record after a certain amount of time passes without another conviction. 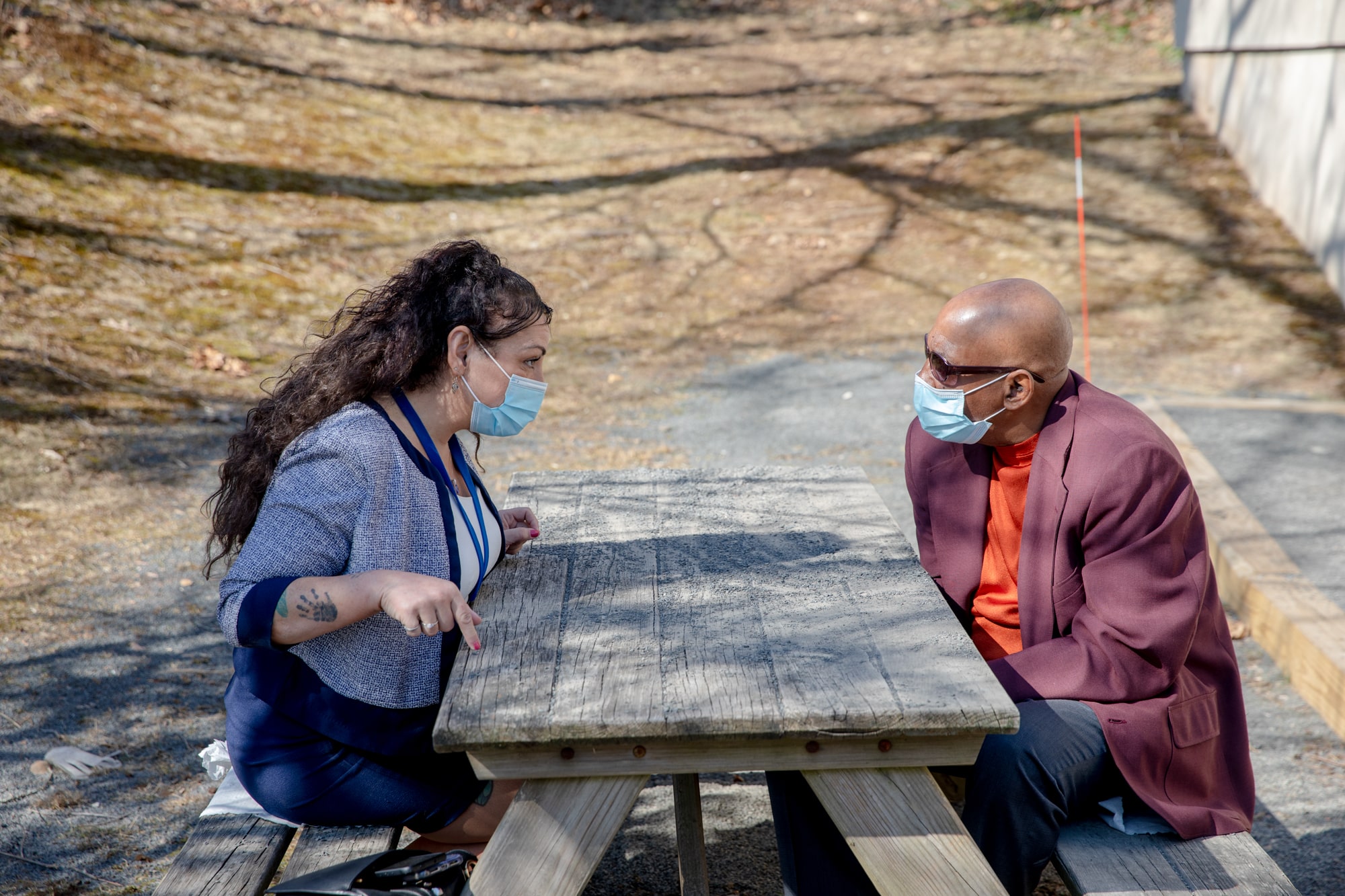 Carrie Perez, left, talks to her client, Derrick Charles Gray, at her job as a peer support specialist at Wheeler Clinic, where part of her job is to help people with drug addiction. “Passing this bill would not only give me the freedom that I deserve, but it would give every person who has worked hard at changing their life their freedom,” Perez said. “They are not given life sentences, but we are given life sentences.”

Proponents of the so-called “Clean Slate” proposal say the legislation is needed to combat discrimination against people with criminal records, which makes it harder for them to secure employment, obtain housing and move on with their lives.

The measure would also require members of the Board of Pardons and Parole to receive annual training on the collateral consequences people face because of their criminal records.

“The system we currently have in place allows for the punishment but not true redemption in moving forward,” said Sen. Gary Winfield, D-New Haven and co-chair of the Judiciary Committee.

Those with criminal records say their convictions hamper them long after they’ve served their sentence and paid their debt to society.

Certain crimes would be ineligible for automatic erasure. Any family violence crimes or sexual offenses would not be automatically erased.

The existing pardons process would also remain in place for individuals who wish to apply before their records are automatically erased, or who have convictions ineligible for automatic expungement. Under existing law, people can apply to the Board of Pardons and Parole to have their records expunged three years after the disposition of a misdemeanor and five years after a felony.

Advocates contend an automated pardon process would go a long way toward clearing the backlog of people waiting to have their records cleared.

A recent study from the Paper Prisons Initiative of Santa Clara University found that of the roughly 407,000 Connecticut residents with criminal records, 89% were eligible to apply for a pardon. Any Clean Slate relief would immensely benefit Black residents, as Black men are four times more likely than whites to be incarcerated; Black women and men are three times more likely than their white counterparts to have a felony conviction.

The analysis makes note of the slow pace of the pardon-granting process. Researchers found that the Board of Pardons and Parole pardoned 626 cases each year, on average, between 2016 and 2019.

Without a Clean Slate bill, it would take 577 years to clear the backlog of people eligible to receive a pardon, the study found.

Connecticut’s Clean Slate proposal is supported by the Congregations Organized for a New Connecticut, a collective of people of varying faiths representing more than 20,000 people from Fairfield and New Haven Counties. The group organized a 950-person Zoom call on Jan. 12 where Clean Slate was the primary topic of conversation.

Perez is working with CONECT to help get the bill passed. She is applying for a pardon, a time-consuming process that requires a detailed reconstruction of the crimes she committed when she was most active in her addiction. That process has required Perez to re-experience trauma from her past, of being assaulted when she lived on the streets.

“I have to relive this, because each felony they want to know, ‘Why did you do this? Where were you? What were you thinking?” Perez said.

Albert Dancy, an associate minister at Norwalk’s Macedonia Church, is also working with CONECT to try and get the bill passed. Dancy spent four years in prison in the 1970s for armed robbery. His sentence began when he was 23 years old. He got out in 1977.

Dancy has downloaded the pardon application several times, but he hasn’t completed it.

“It’s long, it’s complicated. It requires getting references from folks,” he said. “Part of it is not wanting to put in the man hours, the other part is being fearful of it getting rejected.”

Dancy used to minister to patients at a hospital in Norwalk. He volunteered there for eight years, offering prayers of comfort and bringing people spiritual materials like bibles. Then, around 2008, the hospital changed its policy: because of his record, he could only provide pastoral care to hospital patients in his congregation.

“It’s an illustration of how your past can creep up on you at the most unexpected times,” he said.

Because of the seriousness of his conviction, the automatic expungement in the Clean Slate bill will likely not apply to Dancy’s record. “My situation bares the point: If you have a substantial amount of time, and there’s no re-offense, why should it still be on the record?” he asked.

Research shows that those convicted of a violent crime are less likely to be rearrested the longer they’re out of jail. According to one federal study, less than 2% of this population were rearrested eight years after they were released from prison. And other research shows that people tend to age out of crime as they grow older, once they mature and their brain stops developing.

Winfield said if he had it his way, the bill wouldn’t make any offenses ineligible for automatic erasure. But due to political realities, the measure as written will provide limited relief to people convicted of certain crimes.

“If it is true what my mother and many of our mothers told us, ‘If you do the crime, then you do the time,’ then the time should actually end at some point,” he said. “And when we carve people out we say, ‘For you, the time doesn’t end, forever.’”

Still, Winfield left open the door for changes to the offenses eligible for automatic erasure.

“The legislative process is never done until a bill is complete,” he said.

Dancy is now 70 years old. He mentors young people in the foster care and justice systems, helping others avoid his mistakes. At this point, it’s unclear what material impact, if any, a pardon would have on his life. But it would acknowledge his redemption, the path he has walked since making a grievous mistake as a young man in his early 20s.

“The pardon removes that second-class citizen label,” he said. “I’ve demonstrated change is possible and sustainable. As a symbolic gesture, it would be great if the state of Connecticut acknowledged that.”