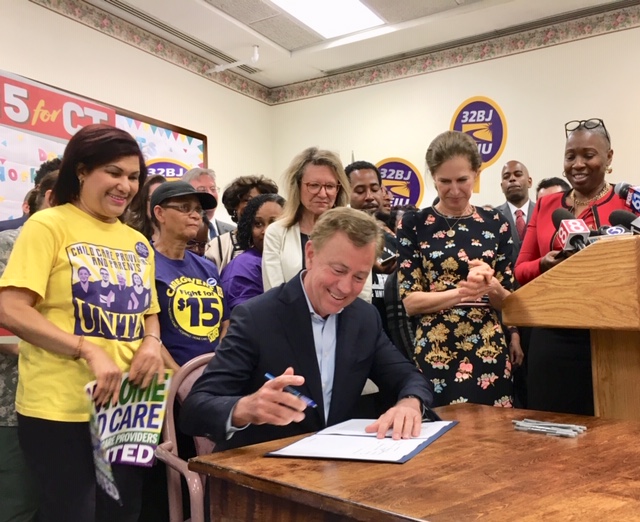 Connecticut families that rely chiefly on minimum-wage jobs could effectively lose more than half of the pay hikes they will receive by mid-2023 due to the potential loss of state benefits, according to a new report from Connecticut Voices for Children.

The New Haven-based policy think-tank is also urging state legislators to expand Medicaid eligibility, enact a new child tax credit and take other measures to help Connecticut’s poorest households save more over the next two years.

“Increases in the minimum wage should not result in minimum wage workers having to use so much of their modest increase in earnings to compensate for losing governmental financial supports that help them meet their essential needs,” researchers Jaclyn Willner, Armelle Casau and Lauren Ruth wrote. “Over time, these hard-working families should be able to save money that can provide some cushion against sudden income loss and help them invest in educational opportunities, career-advancement opportunities, and wealth-building.”

Gov. Ned Lamont and the legislature tried to assist those families in 2019 by enacting a five-tiered increase to the Connecticut minimum wage.

But workers who hold these minimum wage jobs could watch huge chunks of their salary gains vanish as they lose some or all of their food stamps, free school lunches, state-subsidized health care, and rental, energy and child care assistance.

For example, the report analyzes a hypothetical household of three — a single mother in New Haven working for minimum wage, with two young children.

This woman’s monthly wages will have grown by $667 between October 2019 and June 2023. But losses in food stamps, housing and child care benefits will eat up 54% of that income gain, leaving only $306 per month. And none of that takes into account additional losses in purchasing power due to inflation.

The situation gets worse for a family of four with two adults working for minimum wage and two children. Connecticut Voices’ researchers project this household will be earning $1,333 more per month by mid-2023, but will lose at least $722 of that due to benefits erosions.

But because this family likely would lose eligibility for Husky A, Connecticut’s Medicaid program for children, parents, and pregnant women, it could see the entire increase vanish — and find itself down $305 per month — if faced with the maximum out-of-pocket healthcare costs.

If the so-called “benefits cliff” — an abrupt decrease in benefits as pay rises — is not addressed, Connecticut’s already significant racial and gender divides in income and wealth equality are likely to worsen, the report states.

The state Department of Labor projects 510,000 workers will benefit from this minimum wage hike — about 60% of whom are women.

Sen. Cathy Osten, D-Sprague, co-chair of the legislature’s Appropriations Committee and a supporter of the 2019 minimum wage increases, said that while she hasn’t reviewed the Connecticut Voices report in detail, “I would agree. There could be a potential problem coming up. That is something we will be looking at again.”

Osten said legislators already are investigating options to shore up the state’s safety net, though decisions won’t be reached until the next two-year state budget is adopted, likely in late May or early June.

But some proposals already are underway.

Rep. Sean Scanlon, D-Guilford, co-chair of the Finance, Revenue and Bonding Committee, introduced a bill earlier this year that would pump between $150 and $450 into households earning about $203,000 or less during the first year of that program, depending on the number of children in the family.

And dozens of progressive Democrats have called for the legislature to expand eligibility guidelines for Husky A. Connecticut Voices is recommending that the limit be raised from 160% to 201 % of the Federal Poverty Level.

For a family of three in Connecticut, that would raise the annual income threshold from $34,752 to $43,657, according to the United Way of Connecticut.

Other proposals from the report to mitigate the benefits cliff effect include: