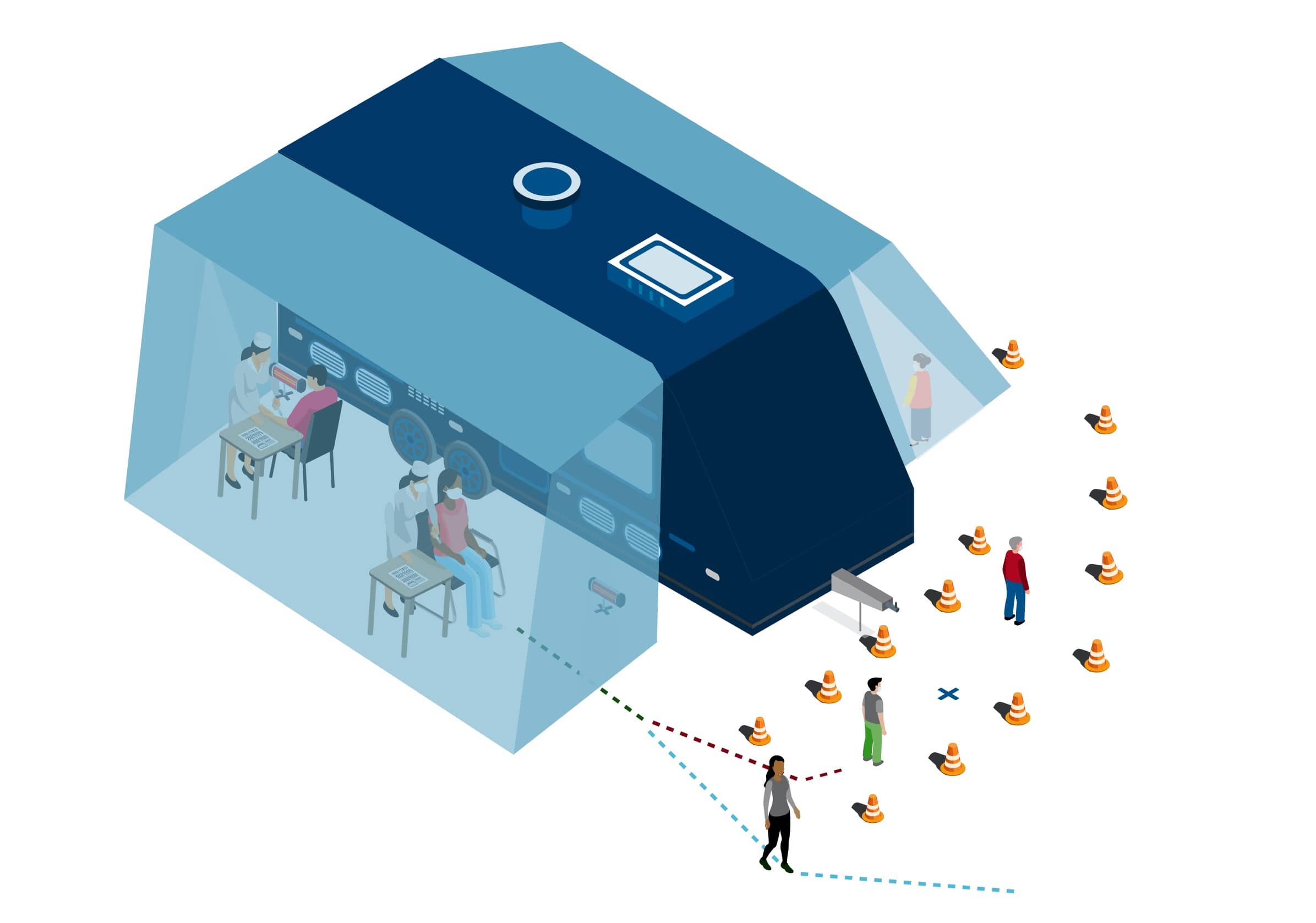 An illustration of a FEMA mobile vaccination site.

A trailer from the Federal Emergency Management Agency is likely coming to Connecticut, but not to provide disaster relief — instead, it will be bringing the Johnson & Johnson COVID-19 vaccine to cities across the state throughout April.

State officials have told local health departments they have applied for use of the FEMA trailer and that it could arrive as early as March 29 and will travel around the state for 30 days if clinics can be arranged. Officials have been scurrying this week to line up clinics before Friday to show the federal government that the state will get full use of the trailer if t is authorized.

State Department of Public Health officials are in the process of matching vaccinators to staff the trailer with local health departments to find sites for clinics within socially vulnerable communities.

The trailer can distribute about 250 doses per day. It will be using the one-shot Johnson & Johnson vaccine, provided by the state through its weekly allotment.

New Britain Mayor Erin Stewart said state officials have told her that the trailer will be in New Britain for three days, from April 9-12. She said the local health department was working to find three separate locations to do clinics.

State officials are recommending parking the trailer at a school, church or a retail lot with easy access for walk-ups and people using the bus lines.

The biggest requirement is space — the trailer requires 3,500 square feet of hard surface space, such as a parking lot, in each location. The towns also will be responsible for providing police for traffic control.

“This is all unfolding as we speak, but we’re working to find locations for the FEMA mobile vaccination van and [are hearing] that we could get it for three days, which is great news,” Stewart said. “They want to target a minimum of 250 doses each day.”

Stewart said that she also was glad to hear they would be using the Johnson & Johnson vaccine, which requires only one dose, so they can vaccinate more people quickly and won’t have to set up second clinics after FEMA is gone.

FEMA’s website says that the trailer can accommodate up to six vaccination stations. About 49 people are needed to operate the site, from traffic control to registering people and giving the shots.

New Britain is being paired with Griffin Hospital, which will be tasked with administering the doses. The local health department will be in charge of registering people and signing up walk-ups, which will be allowed as long as there is vaccine available.

New Britain has ranked near the bottom in terms of percentage of vaccine administered to socially vulnerable populations, although its numbers have been improving since Hartford HealthCare opened a clinic in Liberty Square in late February.

The state has identified 50 ZIP codes that fall under the CDC’s “socially vulnerable index” that have been underserved by the state’s vaccine rollout, and they have told vaccinators to use at least 25% of their vaccine allocation in those ZIP codes.

The FEMA trailer is the latest effort by the federal government to boost the vaccine rollout. The government is already providing extra vaccine to pharmacies and federally qualified health centers so the state can allocate its resources elsewhere.

City officials in New Haven and Norwich said Friday that they are preparing to have the FEMA trailer in their cities as well, although the exact dates were being arranged.

“I would never turn down an offer like that. I was sure they knew the city was very interested,” Uncas Health District Director Patrick McCormack said Friday. Norwich is among the communities in his district.

McCormack said several community partners stepped up immediately to offer possible locations. He said it appears the trailer will be in Norwich for at least one day.

“The fire chief has been going over which places have an entrance and an exit to try and figure out the best location,” McCormack said. “We’re trying to see what spaces are available, and what we need, and the chief even offered to go out with a tape measure to make sure they are big enough.”

McCormack said one place they have ruled out, even though it is big enough, is Senator Thomas J. Dodd Memorial Stadium, the home of the Norwich Sea Unicorns, a former minor league baseball team.

“We want to be in the community where the underserved are located, and that’s in an industrial park,” McCormack said.