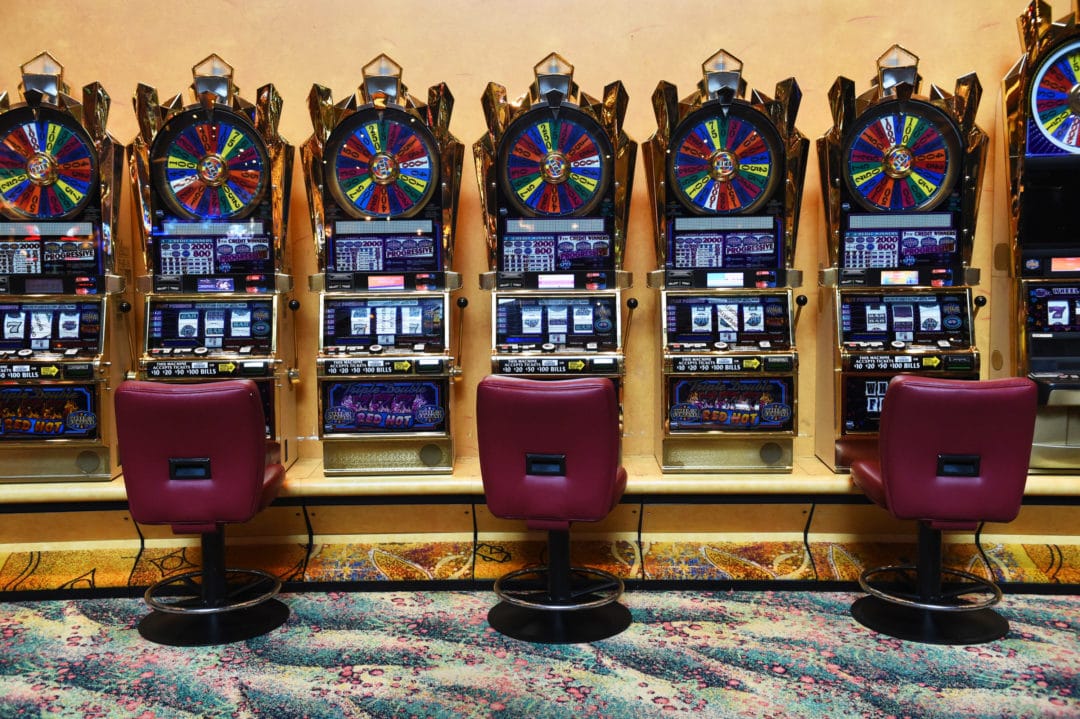 Slots at Mohegan Sun, where every other machine is closed to promote social distancing during the pandemic.

Connecticut inched closer to legalizing sports betting and online gambling Wednesday with votes by a legislative committee to send gaming-expansion bills to the floors of the Senate and House of Representatives.

The Public Safety and Security Committee action places before the full General Assembly a deal recently struck by the administration of Gov. Ned Lamont with the Mashantucket Pequots and Mohegans, the tribal nations with exclusive rights to casino gambling.

The committee action was expected but nonetheless represents a milestone in the Lamont administration’s struggle to navigate the legal and historical complexities of tribal compacts, changing market dynamics and conflicting parochial interests of legislative voting blocs.

Various elements of the deal and related issues are in three bills, one proposed by the administration and two by lawmakers. A fourth would allow the tribes to develop a casino in Bridgeport, an enterprise neither tribe wants to undertake.

The governor’s bill, which is certain to evolve before a floor vote in either chamber, was approved on a bipartisan vote of 20-2, with three absences, and sent to the House, as was a related measure addressing consumer protections.

A bill authored by Sen. Cathy Osten, D-Sprague, whose district is home to both tribes, would direct a portion of the new gambling revenue to local aid for municipalities. It was approved and sent to the Senate.

With the committee facing a deadline this week for reporting out legislation, the panel sent the bills forward as works in progress, a common approach to complex legislation. Unresolved are issues such as whether bets should be allowed on collegiate sports in Connecticut, regulatory oversight and protections against problem gambling.

“This is an ongoing conversation,” said Rep. Maria Horn, D-Salisbury, the committee co-chair. “There are details to be worked out.”

The Lamont administration wants to be able to offer sports in time for the NFL season this fall. House Speaker Matt Ritter, D-Hartford, said he would call the governor’s bill for a vote as soon it is ready.

Lamont and his predecessor, Gov. Dannel P. Malloy, and to a lesser extent, Gov. M. Jodi Rell, all have looked at expanded gambling as a revenue source, but the political and cultural landscape has shifted dramatically in recent years with the U.S. Supreme Court lifting restrictions on sports and the ubiquity of online commerce.

Max Reiss, the communications director for Lamont, said the administration and the tribes have agreed on a 21st-century approach to gambling that will benefit the bottom lines of the tribal casinos and revenue to the state.

If approved by the General Assembly, not only would sports betting be legal, but every smartphone and computer would be a portal to wagering on sports, playing casino games and purchasing CT Lottery tickets. The lottery, whose contributions to the state coffers continue to grow as the casino revenues shrink, would be allowed to offer sports betting, along with the tribes.

For the first time, said Rep. Michael DiMassa, D-West Haven, the issue is ripe, with the Lamont administration finding a compromise with the tribes over exclusivity. With other states embracing sports betting, it is time for the General Assembly to make a significant policy change on gambling.

Rep. Craig Fishbein, R-Wallingford, was the main voice of opposition, warning that not opening sports betting to open competition was an invitation to litigation as a possible violation of the equal protection clause of the Constitution.

Sportech, which is licensed by the state to offer off-track betting, has threatened to sue for a share of online sports betting. Under the deal Lamont struck with the tribes, the CT Lottery would license sports betting with Sportech in brick-and-mortar locations, not online.

Horn said the lottery could involve Sportech in its online book.

That is correct, but they give the tribes exclusive rights to casino games as defined as Class III gaming under federal law, which does refer to sports betting.

“There was a tricky needle — legal needle — to be thread here,” Horn said.

Under the existing exclusivity agreement, the tribes pay the state 25% of gross slots profits, an arrangement that has produced more than $8 billion for the state since the tribal casinos, Foxwoods Resort and Mohegan Sun, opened a quarter-century ago.

If the exclusivity deal is broken, the tribes could stop paying the 25%. The state could try to make up the lost revenue by inviting commercial casinos into the state, but the regional market has grown less attractive with new competition in New York, Rhode Island and Massachusetts.

Annual payments to Connecticut by the two casinos peaked in 2007 at $430 million and have fallen steadily in the face of casino expansion in the neighboring states.