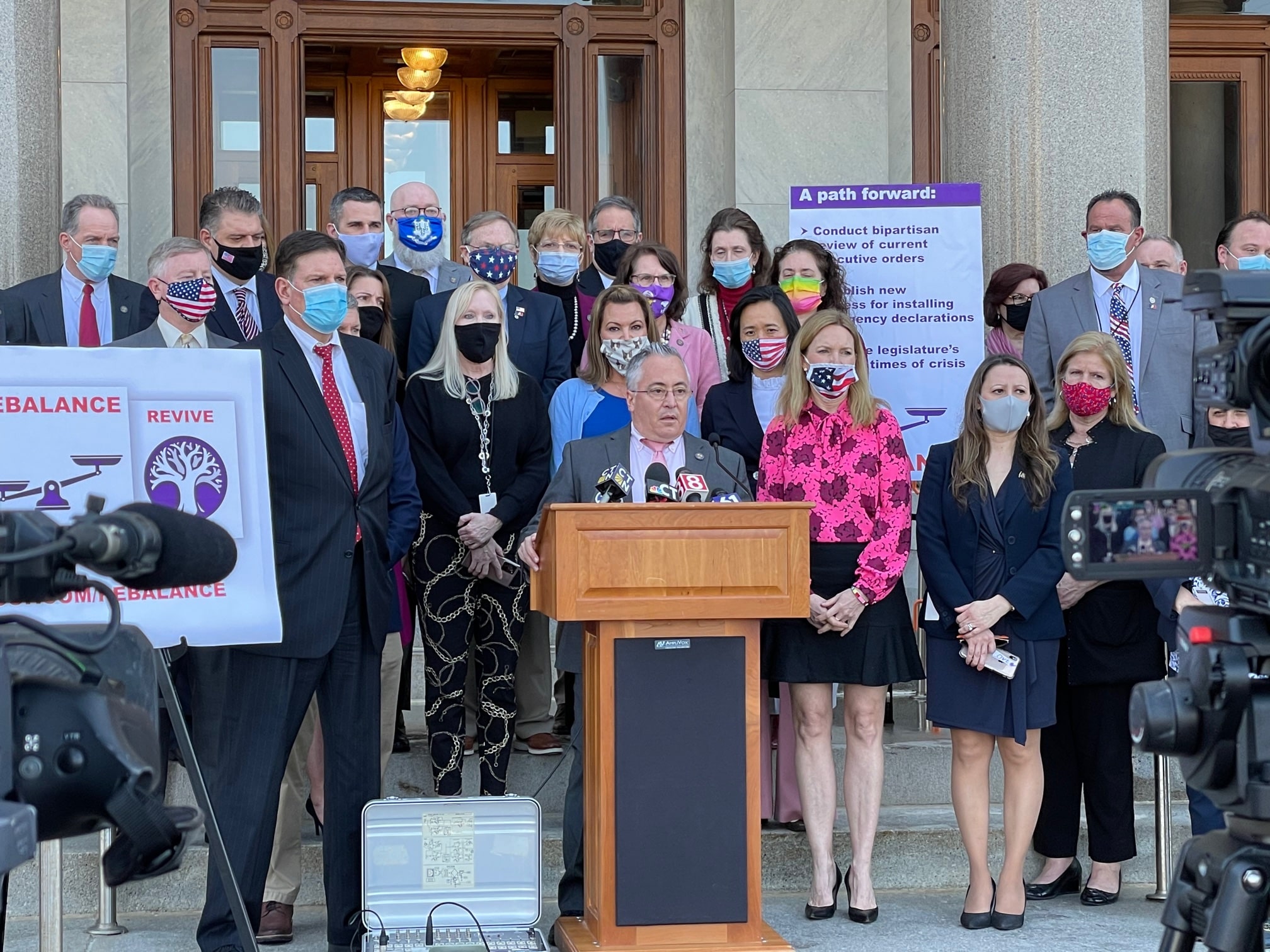 The House Republican minority lashed out Thursday at Democratic lawmakers over a one-month extension of Gov. Ned Lamont’s emergency powers and at the governor for his suggestion that NASCAR might help overcome vaccine hesitancy among white Republican males.

“I’m disappointed and dismayed by the governor’s racially charged comments, intended yet again to malign white males and Republicans at a time when vaccine hesitancy is felt among all races, ages and sexes,” said House Minority Leader Vincent J. Candelora, R-North Branford.

The House voted along party lines to extend the governor’s powers by a month and to reject a Republican amendment that would have limited emergency declarations to 30 days when the legislature was in session, allowing an extension only by a two-thirds vote of the legislature.

On a more amicable note, the House voted unanimously to place in state law a one-year extension of the governor’s most popular executive order: a decree that simplified the process for restaurants to get approval for outdoor dining, a life-saver for many eateries.

The two bills now go to the Senate, where Democrats hold 24 of the 36 seats and passage is assured. The current emergency is scheduled to end April 20. The bill would extend it to May 20.

But he said he was not being sarcastic accusing Lamont of anti-white-Republican racism.

“We have our Black and brown communities of 65 and older have only been vaccinated to 21%, I believe, whereas the white counterparts are at 39%,” Candelora said. “And so this vaccine hesitancy issue, and getting the rollout [right], is very real. And so for the governor to use it to marginalize Republicans and to really race-bait with that issue, is very disappointing to me.”

Polls consistently show that Republicans are far more hesitant than Democrats or unaffiliated votes to get inoculated against COVID-19, with some polls finding the greatest degree of resistance among young Republican males.

At a Black church in Bridgeport last week, he spoke about hesitancy in the Black community, then referred to the Republican polling and suggested the pastor say a prayer for young Republican males.

On WNPR on Wednesday, Lamont said car races might be a place for outreach to white males.

His chief of staff, Paul Mounds, said the governor was demeaning no one with his suggestion.

“In the same way we need to be hosting pop-up vaccination clinics at places like historically Black churches, and community centers in predominantly Spanish-speaking neighborhoods, the same efforts must be made for everyone who is hesitant about receiving any of the safe and effective COVID vaccines,” Mounds said. “If that means health care providers need to set up at places like Watkins Glen or New Hampshire Motor Speedway to reach groups where they are, then that is exactly what should happen. Vaccine acceptance should not be a partisan issue.”

As it turns out, one NASCAR legend, Richard Petty, actually is doing public-service work urging fans to get vaccinated.

North Carolina native and NASCAR racing legend Richard Petty, otherwise known as “The King,” gets his COVID-19 vaccination and is encouraging everyone to find their spot and take their shot. pic.twitter.com/hdmIZ1tMqT

Candelora spoke to reporters outside the Capitol, backed by his caucus members, several of whom volunteered that they and their families were vaccinated or planned to be.

Rep. Mitch Bolinsky, R-Newtown, said he resented any suggestion that the GOP was anti-vaccine.

It would ensure Connecticut does not risk Federal Emergency Management Agency grants and expanded food stamp program dollars. Certain categories of federal aid were enhanced specifically during the pandemic to serve states that have declared a public health emergency.

Ritter also noted the state relied on executive orders last fall to administer absentee ballots during the November elections and must rely on those same orders to get through another round of balloting this spring.

A minority of Connecticut municipalities hold local elections on the first Tuesday following the first Monday in May, and local election officials need a set of rules by April 1 to prepare for those contests.

And with the state poised to open COVID-19 vaccinations early next month to all age groups, the speaker said it’s almost impossible to determine which of Lamont’s dozens of executive orders no longer are necessary.

“It’s not as simple as saying we have an end-game,” he said.

But by May 20, when the last proposed extension of Lamont’s emergency powers would expire,  a surge in vaccinations and warmer weather should leave Connecticut in a much different place, Ritter said.

“That is a game-changer,” he added.