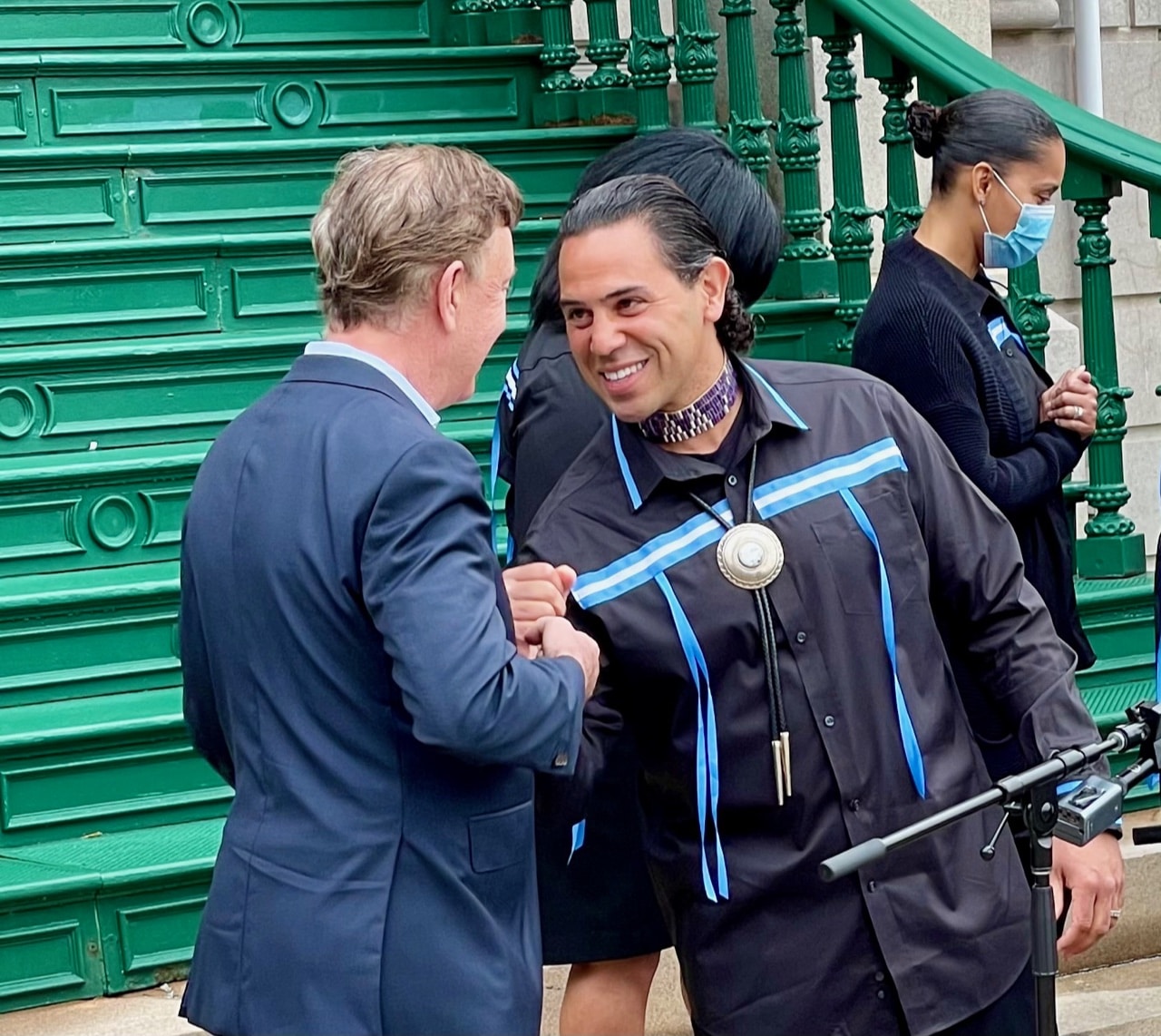 Gov. Ned Lamont and Rodney Butler, the Mashantucket Pequot chairman, left with a laugh and a fist bump.

Behind the smiles, tension remained. But Gov. Ned Lamont and the leaders of the Mashantucket Pequot and Mohegan tribal nations gathered Thursday to publicly celebrate coming to terms on how to bring sports betting and online gaming to Connecticut.

All pledged to work for passage by the General Assembly of a bill codifying their pact, then seek its ratification by the Department of the Interior and Bureau of Indian Affairs — all in time for the tribes and CT Lottery to take bets on NFL football in September.

The two tribes, ancient enemies and recent allies, had awkwardly split weeks ago. Losing patience with the Pequots, the Mohegans and Lamont administration publicly outlined their terms to gambling expansion, not waiting for the other tribe.

With a joint press release last week, the Lamont administration and the two sovereign tribal nations announced a tripartite agreement. On Thursday, they gathered on a stone plaza outside Norwich City Hall to mark the moment.

Rodney Butler, the chairman of the Pequots, arrived last, leading a contingent dressed in identical ribbon shirts, a ceremonial garment. 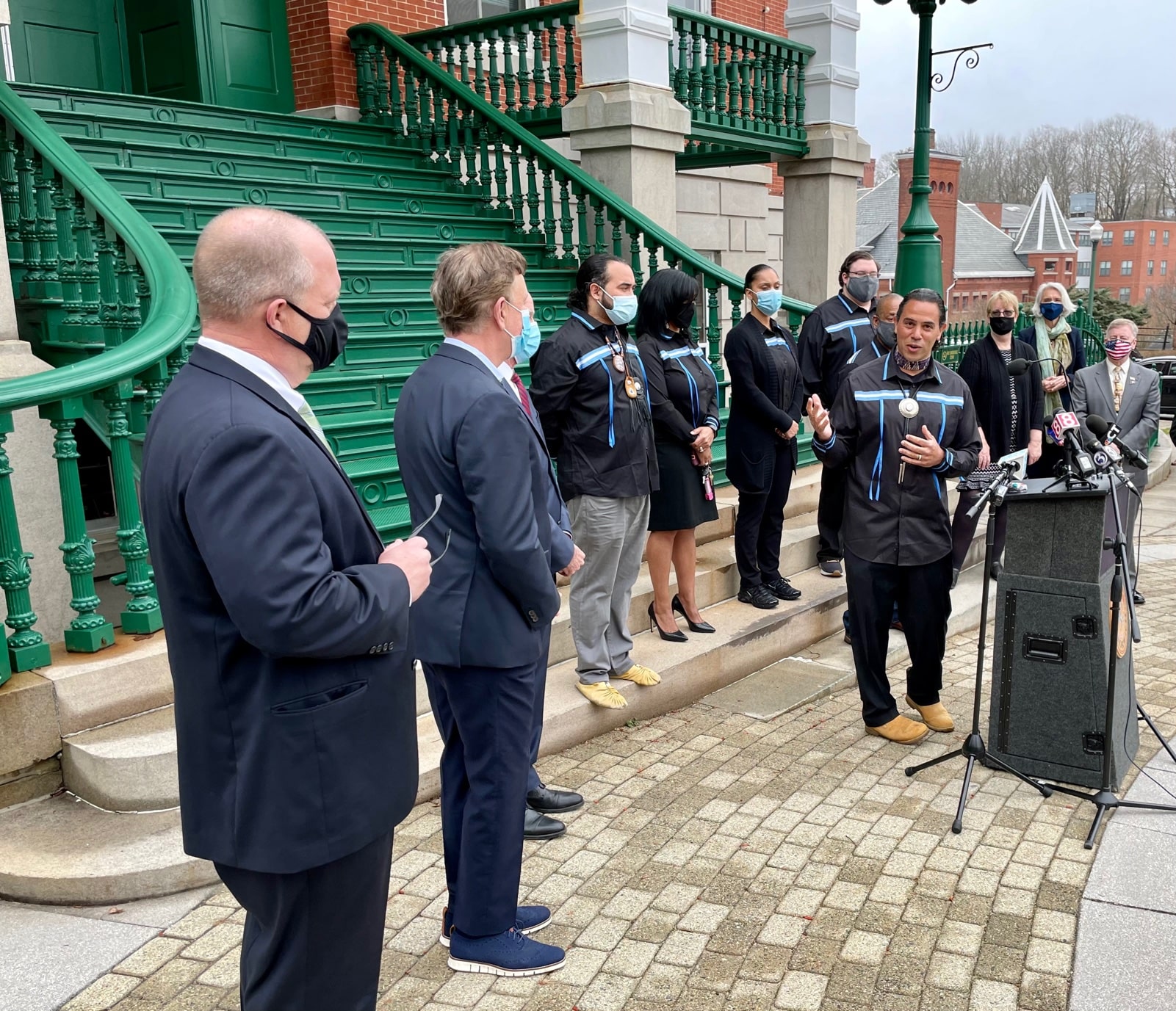 They stood on one side of the lectern with their ally, Sen. Cathy Osten, D-Sprague, whose district is home to both tribes and their casinos, Foxwoods Resort and Mohegan Sun. Lamont and James Gessner Jr., the Mohegan chairman, stood on the other.

“Governor, we had our moments throughout this process,” Butler said. “And I really do appreciate the fact that you stuck with it. There are many times where you could have walked away. I mean, you probably should have walked away, as well as myself and Chairman Gessner, but we all had cooler heads at the table.”

“I’ll just pick up where Rodney left off. Every negotiation has its twists and turns,” Lamont said. “First thing I told our team is we start with respect. These are two amazing tribal nations who have been here long before Connecticut got here and may be here a long time after. And they’ve been great partners, going back a generation.”

They could have used someone from the State Department to arrange the guest list, the order of the participants’ arrival and their turns at the microphone. They settled for a U.S. Congressman, Joe Courtney.

Courtney, a Democrat who has represented both tribes and the rest of eastern Connecticut since 2007, moved easily among the groups, untouched by the hard-nosed negotiations that ended a multi-year stalemate over gambling expansion.

The U.S. Supreme Court lifted restrictions on sports betting in 2018, igniting a race to open sports books. Rhode Island and New Hampshire are in the business, as is New Jersey, one of Connecticut’s competitors for casino gambling dollars.

“Other states definitely moved out quicker than the state of Connecticut,” Courtney said. “But we’re here today, because I think in our state we did it the right way, because it was recognizing that the gaming operations down at Foxwoods and Mohegan are different than just sort of commercial enterprises — private-sector, commercial enterprises. We’re talking about tribal governments.”

The co-chairs and ranking members of the legislature’s Public Safety and Security Committee, which has jurisdiction over gambling legislation, were invited the previous day. Others, including Osten, didn’t get an emailed invite from the governor’s office until 9:55 a.m., an hour and five minutes before the event.

The governor’s office said it was an oversight, not a slight.

Butler turned to Osten and called her “dear friend.”

“You’re a member of our nation,” Butler said. “Our heart is your heart, and vice versa. And we can’t thank you enough for your passion, your commitment and your drive, to see that we’re treated fairly and equitably throughout this region in recognizing what we commit, what we do for the state.”

No lawmaker was party to the talks.

Each tribe sees sports betting as a way to bring gamblers back into their sprawling casino complexes, which have reopened to slow business after closing due to COVID-19.

“That’ll drive foot traffic to the property,” Butler said, adding that the online gaming will expand the customer base. “You know, the western edge of the state is two and a half hours away. That’s a long drive to come to Foxwoods or Mohegan. So in the meantime, when you’re not visiting us and enjoying yourselves on property, you can be doing it from the comfort of your home.”

Both tribes carry about $2 billion in debt, but the Pequots are struggling and recently missed a $250 million payment to lenders.

“That was a timing issue,” Butler said later. The tribe’s lenders have extended the forbearance agreement under which the tribe is operating since defaulting on $2.3 billion in debt in 2009. It took five years to restructure the debt.

“That doesn’t limit us in anything we do,” he said.

While the Mohegans carry similar debt, they have diversified to other gambling markets.

While Butler opted for ceremonial garb, Gessner wore a dark suit, white shirt and tie. Other members of his council were attending to other business.

“We look forward to bringing the skill and expertise we’ve developed in our property here in Connecticut, and around the world, to these new services,” Gessner said. “As a matter of fact, at this very moment, we have tribal leaders from my council marking the opening of the first casino on the Las Vegas strip to be run by a tribal nation.”

After the ceremony, Butler and Lamont fist-bumped.

“Everyone came out of this a winner,” Horn said. “Remember that.”