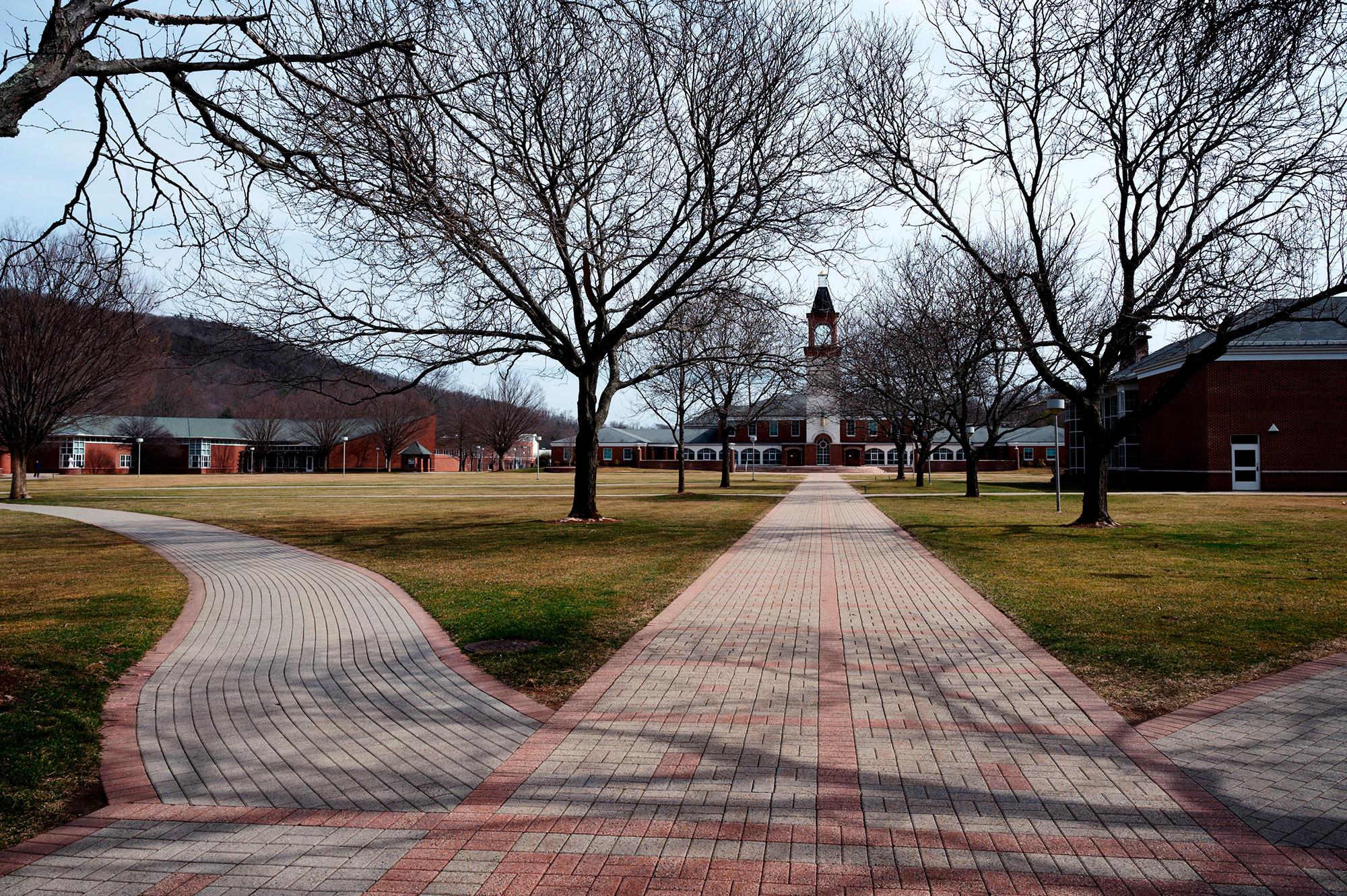 Quinnipiac University in Hamden emptied after spring break last year. Many Connecticut colleges and universities are weighing whether to require that students be vaccinated for COVID-19 before returning for the fall 2021 term.

Until Tuesday morning, the key question facing college administrators in Connecticut about the COVID-19 vaccine was whether they should require students to get immunized before returning to campus in the fall.

Then, after the Centers for Disease Control and the Food and Drug Administration on Tuesday announced a “pause” on the single-dose Johnson & Johnson vaccine because of concerns over the potential for blood clots, administrators’ attention — for the moment — turned to the question of how to vaccinate people on campus now.

UConn Health is pausing its “limited use” of the J&J vaccine following the CDC and FDA’s recommendations on Tuesday, and officials are awaiting further review and guidance from the federal agencies and state department of public health, according to Lauren Woods, director of news at UConn Health.

Woods said they administered 795 doses of the J&J vaccine between March 19 and April 9 for members of the UConn community and the general public, adding that there “have been no reports of any adverse events from the J&J vaccine to our UConn Health COVID-19 Vaccine Program, including no reports of the very rare blood clotting condition in women.”

Western Connecticut State University was the only state university that had clinics scheduled with the J&J vaccine. Officials are currently working closely with Community Health Center to provide alternative options for students before the semester ends, according to Leigh Appleby, spokesman for Connecticut State Colleges and Universities.

“The other three state universities are planning to announce clinics with either Pfizer or Moderna vaccines in coming days,” Appleby said. “We remain committed to giving as many students as possible the opportunity to at least receive first doses before they return home for the summer.”

“We had been hopeful that the state would provide an allocation to us by next week, but that will be delayed until May most likely, due to the J&J issue,” Albertus Magnus College spokesperson Sarah Barr said in an email, adding that the college will have more details about plans in the coming weeks. “We are working with vaccine partners to set up days and times at their vaccination sites that would be dedicated to our students before the end of the month, and we would provide transportation.”

Despite J&J ‘pause,’ question of whether to require vaccines remains

On Monday evening, Wesleyan became the first Connecticut university to announce that students will be required to receive the COVID-19 vaccine before returning to campus this fall. Students who don’t have a religious or medical exemption will have to verify with the university that they are fully vaccinated, Wesleyan officials said on Tuesday. Faculty and staff are being encouraged to get vaccinated as soon as they can.

“With all students fully vaccinated before arrival day in the fall, our campus community will be closer to achieving much-desired herd immunity,” officials said in a press release.

More than a dozen colleges and universities nationwide have announced that they will require students to be vaccinated for COVID-19 before they return to campus for the fall semester, but on many campuses in Connecticut, the discussion is still evolving.

Appleby said two of the main questions CSCU leaders are considering are if it’s possible for them to mandate vaccines — and if they can achieve herd immunity without requiring vaccination.

“I would say the goal is for as many students as possible to get vaccinated,” Appleby said, adding that is why CSCU is working on making vaccinations available on campuses before the end of the semester.

“We have had conversations to look into the possibility of doing as much as we can, and that would include a vaccine requirement,” he said. “No decisions on that have been made, and we’ll have some more information on that as we go forward. But that has been part of conversations, absolutely.”

One question is whether such a mandate would require new legislation or if current laws would allow it, Appleby said.

University of Connecticut spokesperson Stephanie Reitz said the university does not require people to receive vaccines that are only approved for emergency use, which includes the COVID-19 vaccines. That decision is “not expected to change any time in the near future,” she said, adding that any changes will occur in collaboration with the state Department of Public health and local health districts.

“All students will be asked to notify the University over the course of the summer when they have received the vaccine,” Reitz said. “While receiving the vaccine is not mandatory at this time, we cannot emphasize enough how much being vaccinated matters and helps the University successfully reopen.”

When asked during a press conference last week if he plans to mandate student vaccinations at UConn, Gov. Ned Lamont said he wanted to wait before making that decision.

“I understand that universities across the country are doing this, they are in COVID settings. This is an age group which we’re finding is susceptible to infection, so it probably makes some sense, but let’s wait and see,” Lamont said.

Some schools that recently announced plans to require the vaccines are in neighboring states.

Brown University President Christina Paxson told the campus community last week that all undergraduate, graduate and medical students planning to attend classes in person in the fall will be required to get a COVID vaccine, although medical and religious exemptions will be granted. Rutgers University in New Jersey was also among the first universities to announce that students will be required to get vaccinated before returning in the fall.

Most private colleges and universities in Connecticut are still debating strategies for the fall term.

“There is no mandated vaccine this term,” Karen Peart, a spokesperson for Yale University, said. “Yale has capacity to vaccinate our community, but we are limited by the supply we receive. We have let our students know that when they become eligible, they should sign up to receive a vaccine at Yale and at state entities. There has been no decision yet about mandating vaccines for next term.”

Summer Johnson McGee, dean of the school of health sciences and the COVID coordinator at the University of New Haven, said the university is strongly recommending students and employees get a COVID-19 vaccination, and the goal is to have 85% of all students returning to campus in the fall be vaccinated by July 1.

Johnson McGee added that the university recently conducted a survey that showed more than 88% of the campus community are already or plan to get vaccinated.

“The university is considering mandatory vaccination for special, higher-risk populations such as students who are studying abroad, students engaged in clinical work and other off-campus learning activities, but no decision has yet been made at this time,” Johnson McGee said in an email. “The university is working with our campus health services partner, Yale New Haven Health System, to provide access to students through vaccination clinics before the end of the semester.”

At Albertus Magnus, Barr said that because COVID vaccines are under emergency-use authorization, the college’s COVID committee is researching options regarding making vaccinations mandatory for students.

Barr added that Albertus Magnus is also waiting for regulation and guidance from the state or other independent institutions like the Connecticut Conference of Independent Colleges to determine appropriate policy — but if the college does end up requiring vaccinations, exemptions will continue to be allowed for religious and medical reasons.

Part of the deliberation revolves around whether the COVID vaccine can be required, since the Food and Drug Administration has authorized them only under emergency use.

Dorit Reiss, law professor at the University of California’s Hastings College of the Law, said the situation is different because its the first time there are vaccines for the whole population approved under this authorization — but since universities have mandated other vaccines in the past, they could mandate the COVID vaccines.

Reiss explained that institutions could be challenged in court if they decide to require vaccines, but it is unclear which way courts would go.

“I think there’s a good chance that will be upheld. But there are also people who strongly disagree with me on that,” Reiss said, adding that the uncertainty has to do with the emergency-use authorization being unclear, since the statute says that people who get the vaccine have to be informed that they have the right to accept or refuse it.

Reiss said people who might agree that courts would uphold decisions to require vaccination will say that you can’t read into the statute to prohibit universities from doing something that they have been allowed to do for years, but she added that the counterargument to that is if people are informed, and they can accept or refuse the vaccine in the first place, then it can’t be mandated.

“How a court will decide? We don’t know yet.”