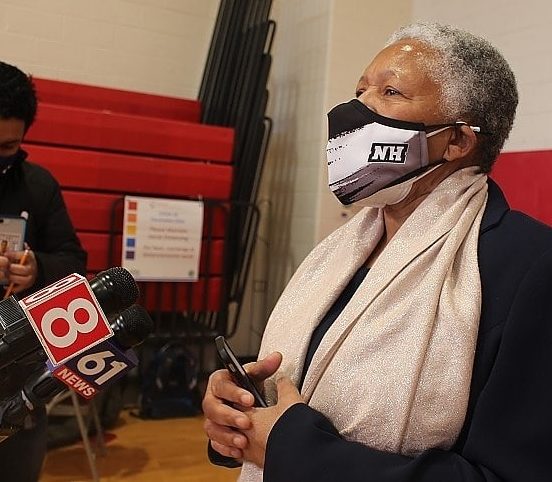 New Haven’s typically cash-strapped school system has a big challenge, and a big opportunity: Figuring out how to spend $136 million in pandemic-induced federal relief over the next few years without getting hooked on the short-term dough.

While some of the evening’s discussion was about the discrepancy between the school system’s request for $198 million from the city’s general fund and the mayor’s proposal that the city send over $189.2 million (“crisis” version”) or $192.2 million (“forward together” version) instead, much of the night saw the education administrators and committee alders discussing another pot of money.

That is, the $136 million-plus in federal grants—some of which have already arrived, more of which is still to come—that the school system will be receiving thanks to a round of recent of Covid relief bills.

Tracey, who grew up in Jamaica, put her rhetorical finger on the core fiscal issue facing the school system at this point in the pandemic when she began he presentation with an expression she heard frequently on “the island.”

“Water, water, everywhere, and not a drop to drink,” the superintendent said.

Awash in federal relief, she continued, NHPS’s fiscal situation can now best be described as, “Money, money everywhere, and not much for general funds.”

Over the next few hours, she, Penn, and Redd-Hannans described the transformative and potentially calamitous sides of receiving more than $136 million in time-limited federal aid.

That grant money is broken out into three large buckets:

• $8.5 million from the first round of the CARES Act’s Elementary and Secondary School Emergency Relief Fund (ESSER I), which must be spent by September 2022;

• $37.7 million in ESSER II money, which came from last December’s federal relief plan and which must be spent by September 2023;

• And at least $90 million in American Rescue Plan aid, which must be spent by September 2024.

“It is a significant amount of money coming our way,” Penn said, particularly about that last and largest pot of funds, which also has the fewest strings attached in terms of how NHPS can spend it.

“We’re going to be very curious as to how we can potentially fundamentally change education in New Haven with these funds.”

Penn also warned that so much time-limited federal education aid has a potential downside. These are one-time grants and, like all grants, they do expire.

“What I don’t want to do is set up a funding cliff when that grant ends,” he said. “I don’t want to set up New Haven to fail two years from now” by leaving the city school system with a general fund inadvertently inflated by term-limited special fund projects that stick around beyond the duration of the initial grants.

Dixwell Alder Jeanette Morrison pushed on this very issue. “What happens so often is that with the Board of Ed, we continue to build on the general fund side with different people and programs, but we don’t have the money, because the grant on the other side is gone,” she observed.

It’s hard to lay someone off after they’ve worked in the school system for a number of years, even if their grant funding runs out, Morrison said.

“What is the exit plan when it comes to the individuals or groups that will get these jobs? We don’t want you guys coming back four years from now and saying, ‘We need $25 million.’”

Tracey agreed, and assured the committee alders that NHPS top administrators have been “talking a lot about sustainability” when it comes to these grants.

For those staff members hired with money from these grants, Tracey said, “it is going to be clear that this is just for the duration of the grant. At the end of the grant, there will be a mass layoff of these people. We cannot and will not put that on the general fund.”

If the city does let these grant-funded programs slip onto the general fund side, “then the system of New Haven will be broke,” she continued. “That would be fiscally irresponsible on my part. We are working to make sure that does not happen.”

Tracey promised that the local school system will not create the same “TIF cliff” it had a few years ago when the $53 million it received in federal school reform aid ran out, and NHPS suddenly had to find millions of dollars to cover general fund teacher salaries that had previously been covered by a time-limited grant.

“This is a short-term emergency fix,” Tracey said about this new round of pandemic-era relief, “to help us over the next couple years.”

The budget workshop was about much more than just the potential perils of all this new federal grant money. It also saw school admins and alders marvel at the transformative possibilities allowed for by this sudden flood of federal support.

The first, smallest pile of new federal aid comes thanks to ESSER I, Penn said. 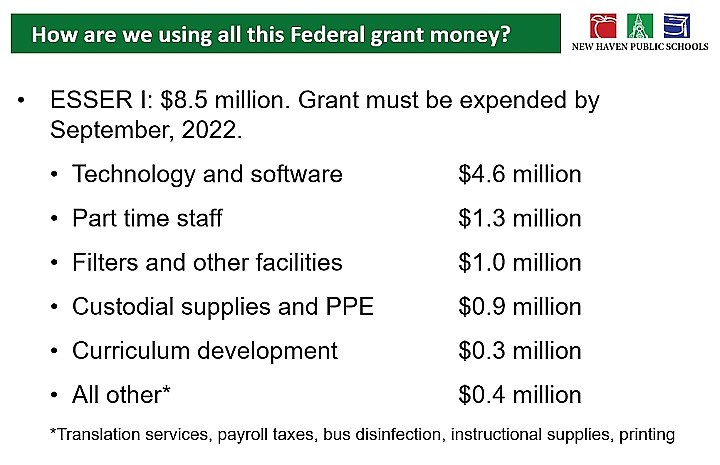 “We went big on tech” with this first grant, he said about the $4.6 million slated to be spent on technology and software. “We had to make sure kids had devices and knew how to use those devices.”

Much of this money has also gone to custodial supplies and personal protective equipment (“I never imagined I’d have to buy that much PPE as the CFO of a school district,” Penn said.”)

And more still went to curricular development on how to teach remotely and asynchronously, to part-time staff like substitute teachers, and to bus drivers.

“We’ve spent somewhere around $6.5 million so far” of that ESSER I grant, Penn said, and the school system is on track to expend all of the available money by the time limit roughly a year and a half from now.

Asst. Superintendent Redd-Hannans took the lead in describing how the city school system plans to use the $37.7 million grant it will be getting through ESSER II, which must be spent by September 2023. 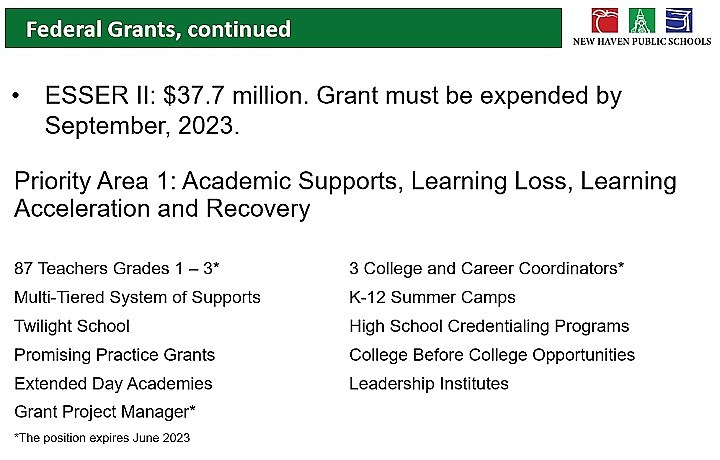 Redd-Hannans said that the district came up with a plan for how to spend this $37.7 million grant after engaging “775 stakeholders.”

Some of the services to be funded by this grant include:

• Hiring 87 new teachers for grades one through three “to address learning loss, learning recovery, and learning acceleration in our foundation years. It’s so important and critical that we provide extra support” for all students in those early years of public ed;

• Setting up a “twilight school” for high school students who have taken on day jobs during the pandemic to have an opportunity to learn and get school credit outside of the regular school day;

• For high school students, “we are expanding our high school credentialing programs and our ‘college-before-college’ opportunities, making sure students are leaving [high school] certified in a particular area,” such as manufacturing or the nursing field;

• Running a host of new K-12 summer camps. “We want out students engaged in summer activities,” Redd-Hannans said. “That extends beyond regular academic portions. We want them outside, having fun, reengaged in the learning process”;

This story was first published April 16, 2021, in the New Haven Independent.