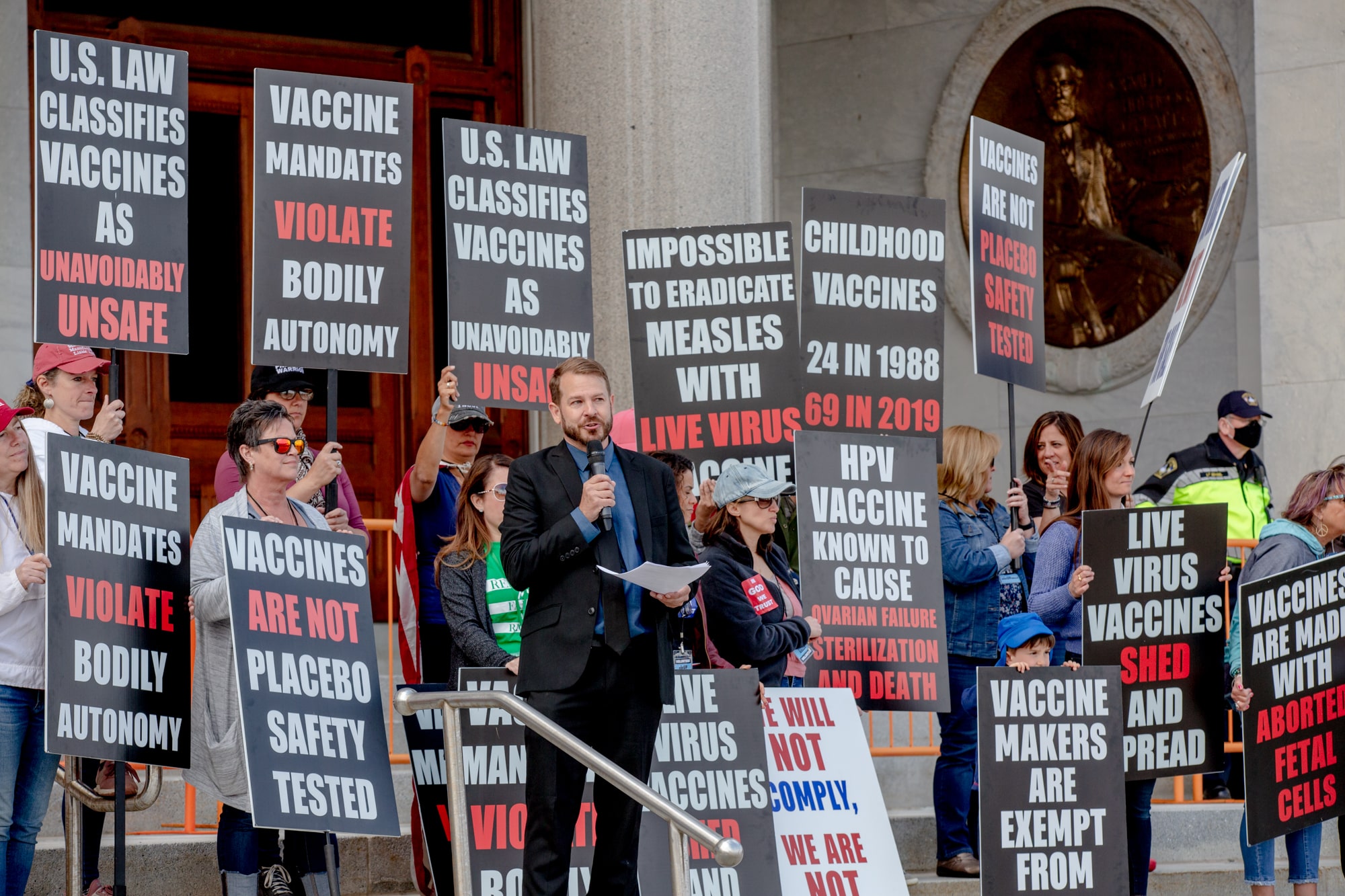 Joshua Coleman of California gives a speech to the protestors gathered at the Connecticut State Capitol Tuesday as the Senate voted on the religious exemption bill.

Two organizations and three parents opposed to the recently enacted law repealing Connecticut’s religious exemption from mandatory school vaccinations are suing the state Departments of Education and Public Health, the Office of Early Childhood Development and three local boards of education, saying the new policy violates their rights to privacy and medical freedom, to exercise religion, and to child rearing, among other claims.

The law will erase the state’s religious exemption beginning on Sept. 1, 2022. Children in pre-kindergarten, day care or those new to the school system would no longer be able to claim the exemption starting that day. Children who are in kindergarten through 12th grade would still qualify for the remainder of their academic careers.

The lawsuit, filed in U.S. District Court in Connecticut on Friday, was brought by nonprofit group We the Patriots USA, the CT Freedom Alliance, and three parents: Constantina Lora, who has a child in preschool in Bethel; Miriam Hidalgo, whose two young children will be eligible for preschool in the fall in Glastonbury; and Asma Elidrissi, who has one child eligible for preschool in the fall and another who has not yet completed registration for kindergarten. Elidrissi and her family live in Stamford.

The plaintiffs alleged that the state violated their First Amendment right to free exercise of religion and rights guaranteed under the Fourth, Fifth and Fourteenth Amendments. They have also claimed unlawful discrimination in violation of the Individuals with Disabilities Education Act.

In addition, they alleged a violation of the equal protection clause of the Fourteenth Amendment because the law allows students in kindergarten through 12th grade who have previously claimed the religious exemption to continue using it, while barring children in pre-kindergarten and day care and any other future enrollees of the school system from refusing vaccinations on religious grounds. It also states that children are allowed to continue claiming medical exemptions but cannot claim the religious exemption.

“Today we filed an action in federal court to fight for the right of every child to have equal access to an education, and to freely exercise their religious beliefs, without interference or intimidation from the government,” said Brian Festa, an attorney and co-founder of CT Freedom Alliance, a group that has rallied against the religious exemption legislation passed this week. “We did this because we had to do this. The legislators and the governor of the state of Connecticut have abandoned their oath of office, rushing to pass into a law a bill that they knew full well ran afoul of the U.S. and Connecticut Constitutions.

“We will see this litigation through to the very end, and we are confident that we will gain a victory for the children of Connecticut.”

Festa said he and others will also file a lawsuit in state Superior Court. In addition to the state agencies, the federal suit names the Glastonbury, Bethel and Stamford boards of education.

In an emailed statement late Friday, a spokesman for Lamont’s office declined to comment on the court filing.

The new state law also requires Connecticut’s public health commissioner to release school-by-school immunization data; helps parents who cannot afford vaccines for their children by mandating that cities and towns cover the expense; and creates a board that will review the state’s vaccine program and issue recommendations.

Connecticut is poised to become the sixth state without a religious exemption. New York, Maine, Mississippi, West Virginia and California do not have the vaccine exemption; 45 states and Washington D.C. do, according to the National Conference of State Legislatures.