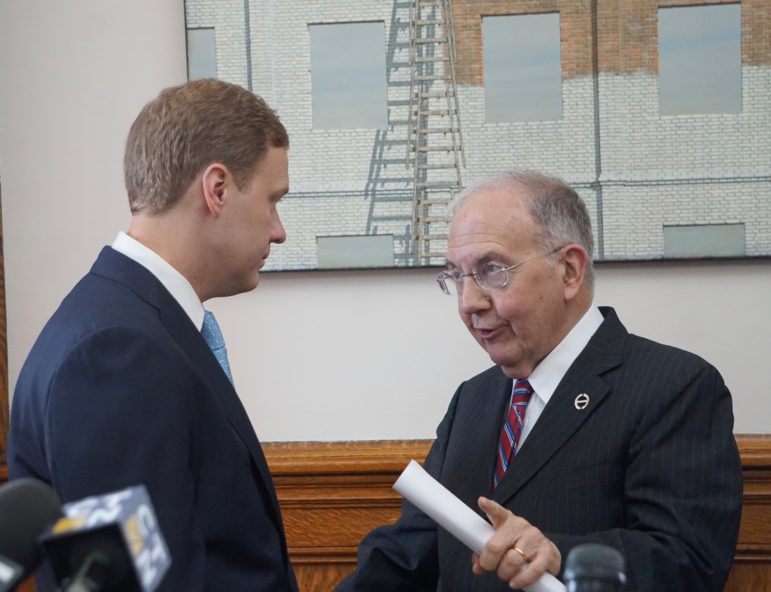 With a record-setting budget reserve, another big surplus projected and billions of federal coronavirus relief dollars on the way, top state legislative leaders are confident Connecticut has the resources to avert a nursing home strike this spring.

But while the dollars are plentiful — at least in the short term — so are the needs, as many groups besides health care workers are reeling from the pandemic-induced recession.

And the chances of avoiding a work stoppage as Connecticut continues to reopen this spring hinge on how Gov. Ned Lamont and the legislature dole out those dollars.

“At the end of the day, the workers that had to go into the fire … are these nursing home workers at the long-term care facilities. We have to help them,” said House Speaker Matt Ritter, D-Hartford.

Despite the dangers of COVID-19, health care workers worked long hours over the past year, with many getting sick and some dying from the virus, the speaker noted.

While Ritter called improving compensation for health care workers “a moral obligation,” he also noted those who argue the state can’t afford to do so would have a tough time making their case.

SEIU District 1199 New England officials have released very limited details about the closed-door negotiations going on between the bargaining unit and the 33 nursing homes that were formally notified last week of a potential strike starting May 14 involving a total of 3,400 employees.

But District 1199 spokesman Pedro Zayas said Tuesday that workers currently earn anywhere from the state minimum wage — $12 per hour — up to $15 per hour.

The union is asking for a new floor of $20 per hour, as well as increased staffing. And while some members have good health benefits, Zayas added, some have insurance that needs to be improved.

But if the state increases compensation and benefits for unionized workers, it also would have to upgrade the same for workers at non-union nursing homes.

“These workers, after all they’ve been through, deserve livable wages and benefits and affordable health insurance and safe staffing” levels, Zayas said. “The question is whether Gov. Lamont will make them a priority.”

When asked why he singled out Lamont, when the governor and legislature will jointly write the next state budget and spending plan for federal pandemic relief, Zayas added, “We feel that the General Assembly is pretty much on our side.”

He added that “We agree that Connecticut is very capable of generating the money that is needed.”

Max Reiss, the governor’s communications director, said “Governor Lamont has demonstrated time and again how critical these workers have been during the pandemic. He’s followed up his word of support with action, providing extra pay to these workers” using an earlier round of federal pandemic relief in 2020.

Lamont also proposed using the latest tranche of federal aid to bolster compensation further, though not at the level sought by the unions.

Connecticut has a record-setting $3 billion in its rainy day fund, and a new report last week projected it would close this fiscal year with nearly $950 million more left over.

Complementing all of that is more than $6 billion in the latest round of federal pandemic relief earmarked for Connecticut, including $1 billion for school districts, almost $1.6 billion for municipalities and regional government entities, and $2.6 billion in very flexible funds for state government.

That’s more than enough to close the $2.5 billion deficit analysts projected last February for the next two-year state budget, as well as meet the union’s demands.

But things aren’t that simple. Lamont and legislators are facing many other demands, and the nursing home industry itself is facing a fiscal crisis.

In February 2020, just before the first case of COVID-19 was reported in Connecticut, nursing homes were 87% occupied on average, state data show. A year later, the average occupancy had fallen to 72%.

Matthew Barrett, president and CEO of the Connecticut Association of Health Care Facilities — which represents more than 140 facilities — called the Democratic legislative leaders’ comments “reassuring on many levels, especially as a signal to keep all parties at the bargaining table while the state budget deliberations continue.”

But Barrett estimates the nursing home industry needs an extra $312 million annually from the state to offset the revenue losses and rising costs that have developed since the pandemic began — a figure that doesn’t include any additional funds for enhanced pay or benefits for workers.

And nursing homes and their members are just two in a long line queuing up before state officials for more funds.

The legislature’s Finance, Revenue and Bonding Committee has endorsed a request from the restaurant industry to let these businesses keep one year’s worth of receipts from the meals surcharge on the sales tax — nearly $50 million.

Lamont proposed a $50 million deposit into the state’s unemployment trust, which is facing close to $1 billion in projected debt. What the state doesn’t cover will be recouped from businesses.

The private, nonprofit agencies that provide the bulk of state social services are asking lawmakers to phase in a major rate increase, boosting their annual payments by more than $460 million by 2026.

The full legislature enacted a bill earlier this year that effectively pledged to increase non-education aid to cities and towns by about $135 million per year in the new budget.

And the legislature’s Appropriations Committee has endorsed a huge funding boost for public colleges and universities, including the debt-free community college program.

Sen. Cathy Osten, D-Sprague, co-chairwoman of the appropriations panel, said she also believes averting a strike is “possible” but said it hinges on all parties recognizing the pandemic has taken a hefty toll on many groups statewide.