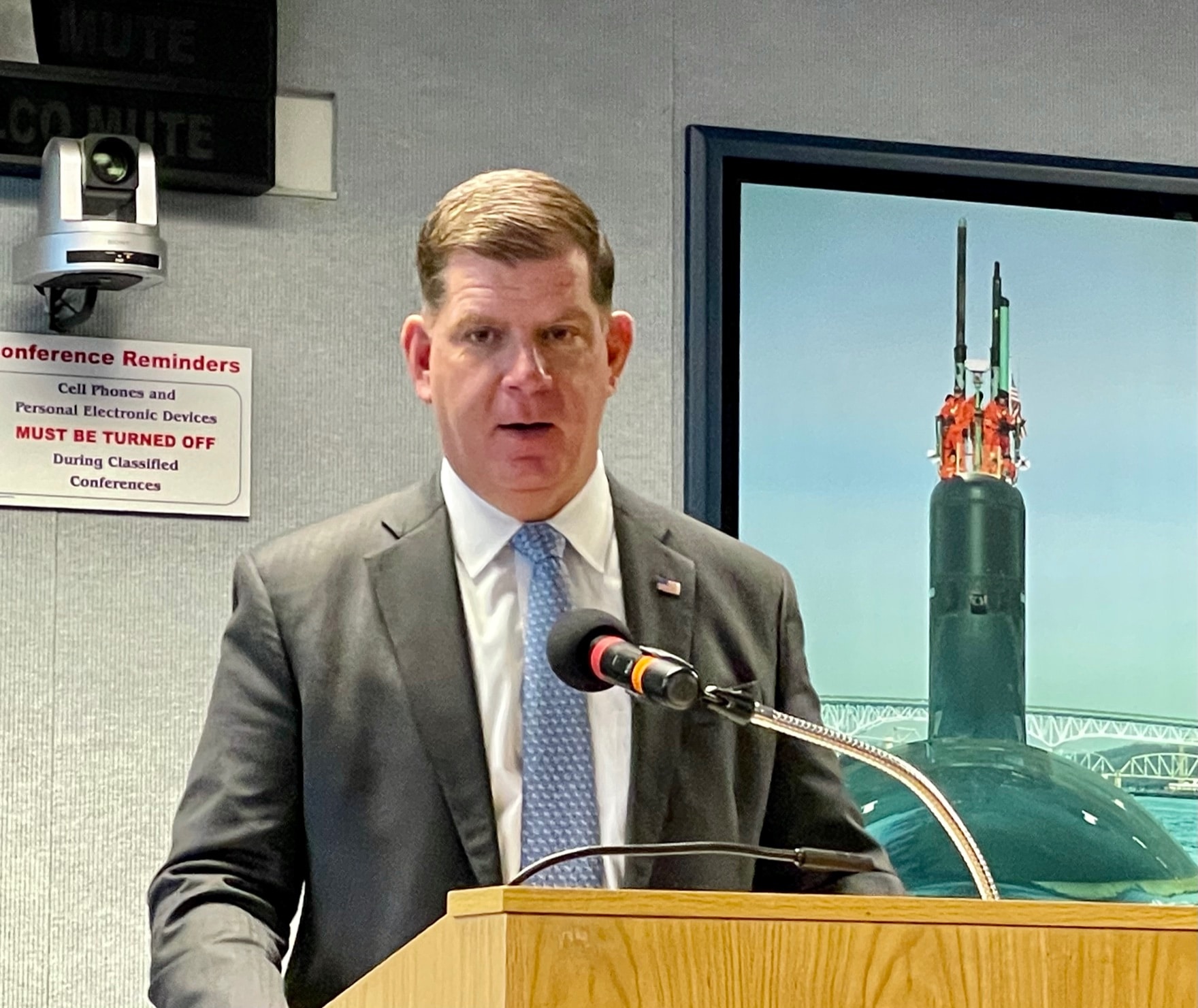 Labor Secretary Martin Walsh talks to the press at EB in a conference room sometimes used for classified briefings.

The trip by Labor Secretary Martin J. Walsh and Commerce Secretary Gina Raimondo brought the former Boston mayor and former Rhode Island governor to a regional employer flush with federal contracts, challenged only by the need to hire and train thousands of designers, engineers and assemblers in a rapidly growing workforce.

With work underway on a new class of submarines and the Cold War generation of shipyard workers hitting retirement age, EB’s president, Kevin M. Graney, said the company will be in an aggressive hiring mode for the foreseeable future — assuming Connecticut and Rhode Island can continue to produce a job-ready workforce.

“For the first time in a generation, we are building two classes of submarines: the Virginia class of fast-attack submarines, and the Columbia class of ballistic missile submarines,” Graney said. “So that we can respond to the needs of the Navy, we’re hiring thousands of new employees, we are open for business. We hired more than 2,000 last year, and we’ll do that again this year.”

There is no friendlier place for visiting administration officials and members of Congress than a defense contractor whose existence relies on the continued support of the White House and congressional votes for defense authorizations, a task made easier with the ascension of U.S. Rep. Rosa L. DeLauro, D-3rd District, as chair of the Appropriations Committee.

DeLauro promised continued funding for federal apprenticeship programs, underscoring that she was in a position to make good on the promise.

“It’s good to be chair,” she said, prompting laughter. “It really is.”

Graney welcomed the two secretaries, DeLauro, Gov. Ned Lamont and two others whose committee assignments are of special interest to the company: U.S. Rep. Joe Courtney, D-2nd District, chair of the Subcommittee on Seapower and Projection Forces, which oversees U.S. Navy shipbuilding; and U.S. Sen. Richard Blumenthal of the Armed Services Committee.

Graney took the delegation on a tour of the shipyard, its massive assembly sheds and graving docks, as well as the construction of infrastructure necessary for the assembly of the new ballistic missile subs. They will be 560 feet long, nearly 200 feet longer than the Virginia fast attack ships.

The submarines are constructed in modules, with hull sections manufactured in Quonset Point, R.I., and shipped by barge to Groton for assembly, finishing and testing before being launched into the Thames River, not far from the Naval Submarine Base.

One of the secretaries’ key talking points was to highlight the $48 billion in workforce development in the American Jobs Plan that Biden proposed in a speech to Congress last week as a “blue-collar blueprint to build America.” It is the follow-up to the $1.9 trillion COVID-19 relief package passed in March.

It includes creating as many as 2 million new apprenticeship slots, some geared to providing opportunities for women and minorities to non-traditional occupations.

‘The secret to successful job training and apprenticeship is a partnership between labor and business, between workers and the companies that employ them,” Raimondo said. “And in that regard, EB is a model for the work that the secretary of labor and I will look to expand.” 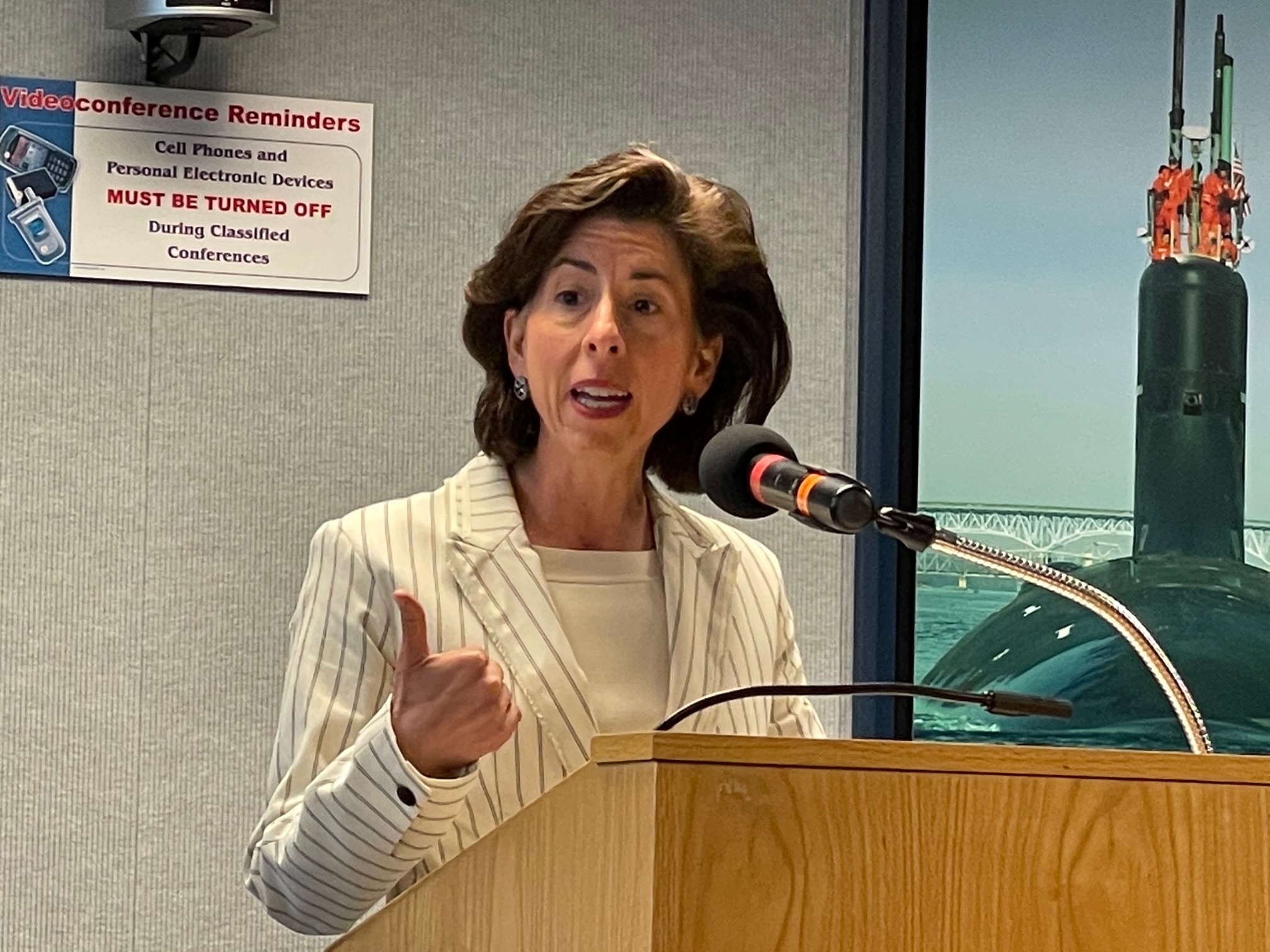 Walsh and Raimondo met with some of the EB workers enrolled in the federally backed apprenticeship program reauthorized in 2016.

“Honestly, it struck me [that] every single one of them talked about the impact it has in the family. And you don’t hear that every day,” Walsh said.

Depending on the skills, the programs last for three to five years, boosting the skills and wages of the employees and giving EB the workforce it needs to meet the Navy’s production schedule.

EB has 300 workers in programs, a number expected to grow to 500. Another 450 have completed the programs.

Given the total control of the region’s congressional seats by Democratic allies of the president, there are no votes for the plan at stake here. But that is not stopping Vice President Kamala Harris, who visited Connecticut last month, from joining Raimondo on Wednesday to promote Biden’s infrastructure and jobs plan.

Courtney noted that the federal apprenticeship program dated back to the Fitzgerald Act, a law authored in 1937 by Congressman William Fitzgerald of Norwich, a child of Irish immigrants, as is Walsh.

While Connecticut, like other northeast industrial states, has lost manufacturing jobs to cheaper labor markets overseas and in southern states, advanced manufacturing has rebounded here, especially companies in the aerospace or submarine supply chain. 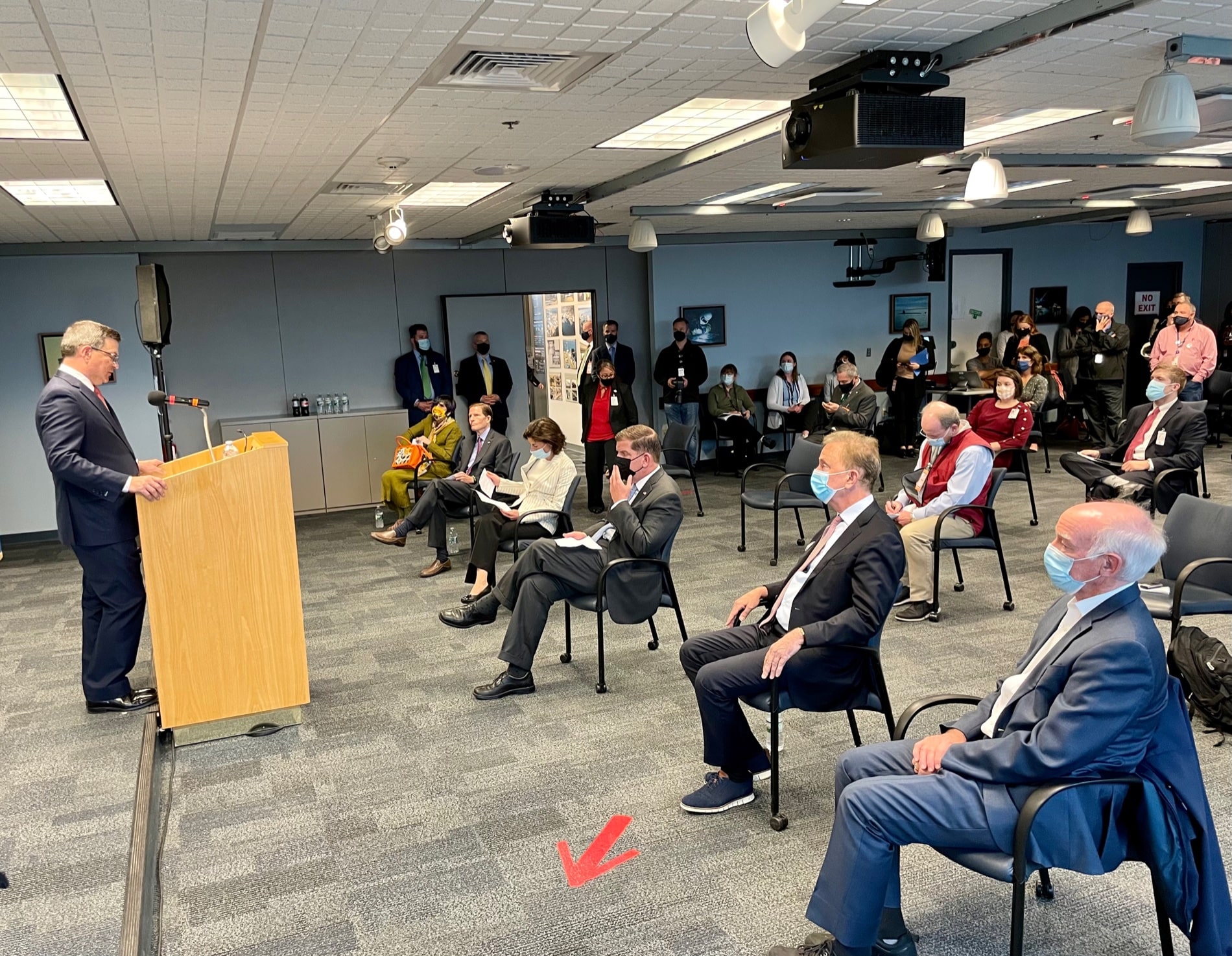 Walsh said the Biden administration has the same goals and is intent on finding ways to use federal stimulus dollars to build careers, not just temporarily boost the economy.

“I think we saw it here today. We saw a couple different groups of people. Some came from community college. One young man, we were talking outside, he told us he was a high school dropout. And now he’s going to finish his degree, get his degree. And he’s going on to profession here and a career here,” Walsh said. “This is an opportunity for that. So I think that we have to reimagine how we do things.”

One of the apprentices, Arnold Chappell, 25, of Groton, started at EB out of high school. The apprentice program is giving him a college degree and the skills for more challenging and better paying jobs in the shipyard.

Another, Holly Boyle, 33, started as an administrative aide and now is being trained as a designer.

Lamont said EB’s current hiring is important, but so is the long and reliable expansion to come.

“I know that now you are hiring 1,000-plus now, but your peak year is going to be in 2029,” Lamont said. “And so those folks that are in third, fourth, fifth grade, we have to do everything we can let them know what an amazing career, a great paying job, a job with job security, a job that makes a difference in terms of a world peace, and a job right here in Connecticut and Rhode Island.”