Telehealth changes expected to be extended 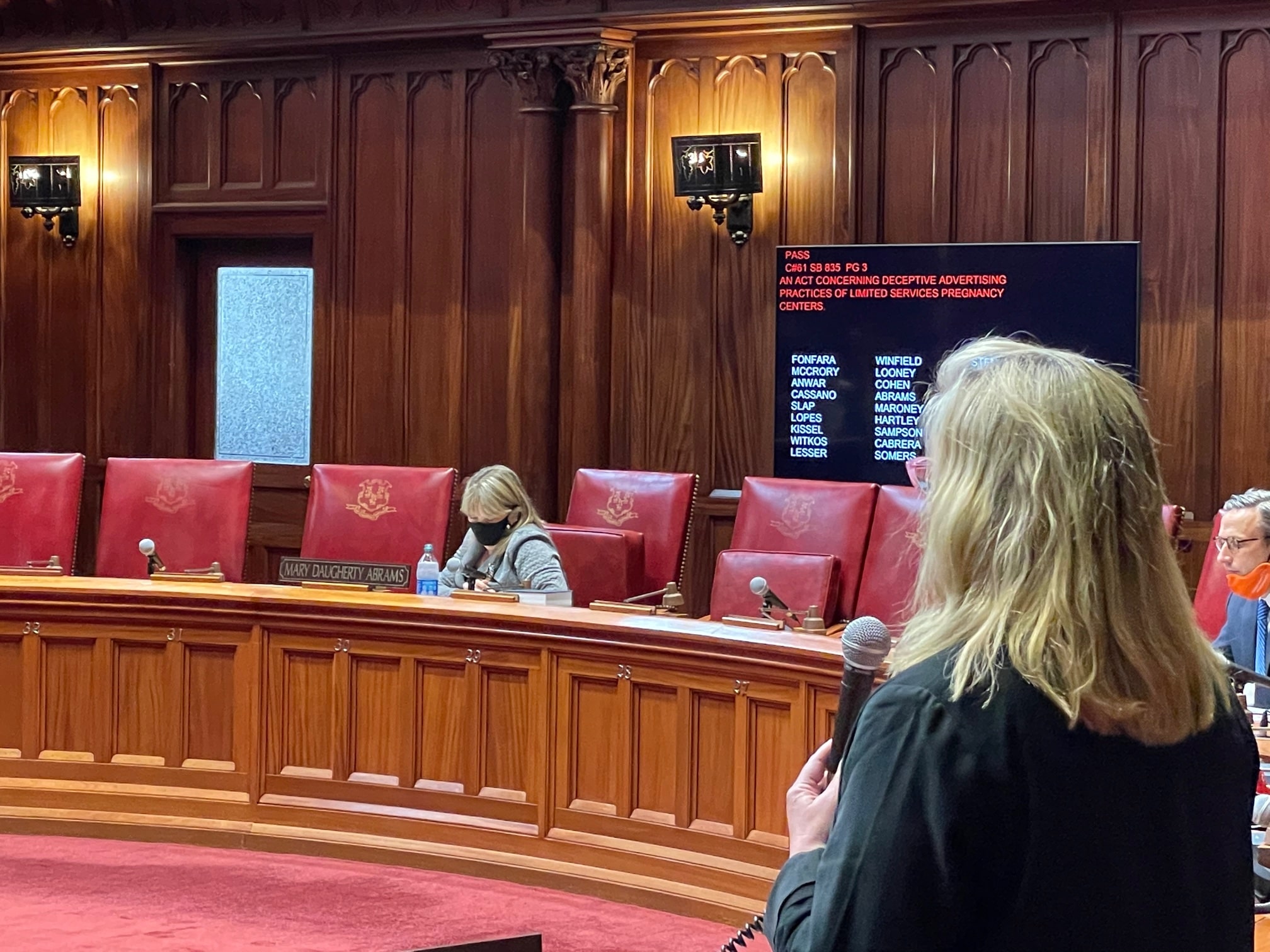 Sen. Heather Somers speaks against a bill that would regulate crisis pregnancy centers. Seated at right is the sponsor, Sen. Mary Daugherty Abrams.

The state Senate on Wednesday approved a bill that would ban deceptive practices at so-called crisis pregnancy centers, the faith-based institutions accused of handing out misleading information about abortions and other women’s services.

The bill prohibits deceptive advertisements in print publications, online postings, public statements, or “any other manner,” and applies whether the centers do it themselves or someone else does it on their behalf. The proposal gives the Attorney General’s office the power to seek a court order to stop the deceptive practices. Violators would receive a notice to correct the problem within 10 days. If no action is taken, the attorney general could appeal to the courts, seeking fines or other penalties.

If the court finds a pregnancy center in violation, the bill allows the state to impose penalties of $50 to $500 per incident, along with charging “reasonable attorney’s fees and costs.” The courts could also order the facilities to pay for and disseminate corrective advertising or to post a remedial notice that corrects the deceptive advertising.

The bill would not stop the state or any municipality from seeking other legal or administrative relief.

Critics have said that staff at the pregnancy centers sometimes pose as medical professionals to lure in women and hand out misleading information about abortions.

“This bill affirms that Connecticut women have the right to seek reproductive health care in an honest, straightforward manner. It makes clear that Connecticut will not allow deceptive advertising practices,” said Sen. Mary Daugherty Abrams, a Meriden Democrat and key proponent of the bill. “It reinforces that in Connecticut, women will be treated with respect, honesty and dignity when they are seeking reproductive health care, including abortion services and emergency contraception. Ultimately, this bill is simple: tell the truth, regardless of one’s beliefs about a woman’s right to choose.”

A similar measure regulating crisis pregnancy centers was raised in 2019 and won approval in the House. It died in the Senate, however, with leaders saying they ran out of time to debate the issue.

The proposal has been opposed by many of the state’s faith-based pregnancy centers and organizations that support them. Several Republicans took issue with it Wednesday, saying it would put a “chill” on the facilities’ communications with the public.

The bill was passed by a vote of 21 to 15, with three Democrats – Sens. Joan Hartley of Waterbury, Cathy Osten of Sprague and Dennis Bradley of Bridgeport – casting votes against the proposal.

It now heads to the House for final approval.

The Senate also voted unanimously for final passage of a bill to authorize an extension of an executive order loosening restrictions on telemedicine appointments, which have become vital for many patients during the COVID-19 pandemic.

The measure allows health care providers and patients to communicate over a broader range of platforms, including audio-only phone calls. Under the mandate, a greater variety of health care professionals can also conduct the visits, from behavioral therapists to dentists.

The bill also ensures payment parity, meaning insurers would have to pay providers the same amount for a telehealth visit as they would for an in-person appointment.

The bill would keep the changes in place through June 30, 2023. It passed the House earlier this week.