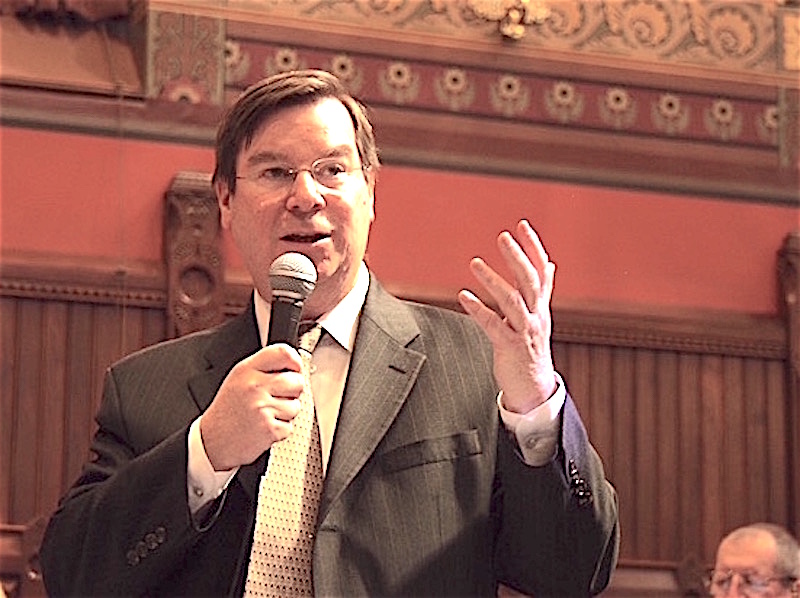 Robert M. Ward, an unassuming leader of the House Republican minority who rose above partisanship at crucial junctures, helping to fund the reimagining of the University of Connecticut’s dowdy campus in 1995 and to nudge a corrupt governor from office in 2004, died Sunday in hospice care at his home in North Branford. He was 68.

A kidney transplanted from his brother gave him a decade of good health, but the organ failed about a year ago, requiring home dialysis. He had been in failing health since Christmas. His death was announced by friends who served with him in a long and varied career in state government.

His three decades in public service started with 22 years in the state House of Representatives, followed by four as the commissioner of motor vehicles and nearly six as one of the two auditors of public accounts, the legislature’s primary oversight agency.

“Bob is one of those few who had an impact on the House of Representatives and on state government,” said Brian Flaherty, one of Ward’s deputies in the House. “There are millions of people who live in this state and will never know his name but owe him a debt of thanks for his stewardship.”

Ward was a lawyer, a detail-oriented lawmaker, and a close reader of bills and budgets, a habit that could make him an important ally or significant adversary in floor debates. He was a fiscal conservative who preferred to engage with the Democratic majority and shape budgets by negotiation, rather than criticize from the sidelines.

In 1995, that approach and his standing with Thomas D. Ritter, then the House speaker, gave him a role in contributing to the final form and the passage of UConn 2000, a 10-year, $1 billion plan that then was the largest initiative in the nation to modernize and expand a public university.

Ritter, a Democrat whose son, Matt, is the current speaker, said he worked in concert with Ward to pass the massive bill as a bipartisan measure signed by the first-year governor, Republican John G. Rowland. It didn’t hurt that was the year the undefeated UConn women’s basketball team won its first national title.

“Bob, without blinking, stepped up to the plate and did the right thing,” said Lawrence F. Cafero Jr., who was Ward’s deputy and successor as GOP leader. “I think that was his finest moment.” 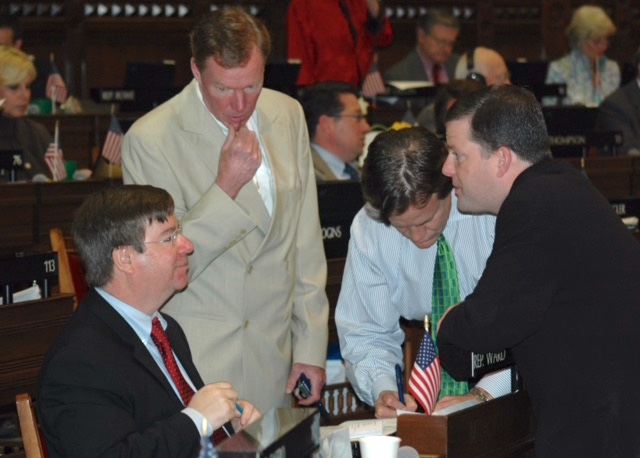 The inquiry, overseen by a select committee with an equal number of Democrats and Republicans, ended with Rowland’s resignation. The three-term governor later pleaded guilty to a federal corruption charge and was sentenced to one year and a day in prison.

Two of Ward’s closest friends in the legislature were Cafero and Flaherty, each raconteurs. Ward was circumspect, as reserved as his two deputies were outgoing.

When Flaherty recommended former U.S. House Speaker John Boehner’s anecdote-rich memoir, “On the House,” to Ward, he told him that the dynamics of running a caucus that Boehner so colorfully described would remind him of his own career.

“The stories reminded me of our adventures,” Flaherty said he told Ward.

Ward smiled and replied, “Except we had the good sense not to put them in a book or name names.”

Ward was first elected to the Connecticut House in 1984 from the 86th House District, when Ronald Reagan’s landslide re-election victory and the existence of a party lever gave Republicans control of both chambers of the General Assembly. But the GOP tide receded two years later, and Ward’s first term would be his only in the majority.

He became the House GOP leader after the 1994 election, holding the post for a dozen years. He had expected to compete with M. Jodi Rell, a deputy leader. But she left the House to become Rowland’s running mate, succeeding him a decade later as governor.

Despite lobbying from Rell’s senior staff, Ward vigorously opposed one of Rell’s first initiatives: sweeping campaign finance reforms that would create a voluntary system of public financing and contribution restrictions, including a ban on donations from state contractors and limits from lobbyists.

Ward found the bill to be a porous defense against special-interest money, undermined by a compromise the Rell administration struck with Democratic legislators that preserved the influence of House and Senate leadership PACs.

The bill permitted political parties and legislative leadership’s political action committees to make unlimited expenditures, such as paying for direct mail appeals, on behalf of candidates who accept public financing.

“I found that loophole to be so overwhelming I couldn’t support the bill,” Ward said. 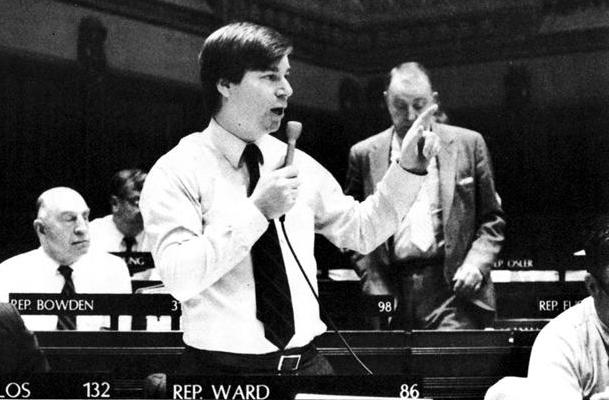 Ward during a House debate early in legislative career.

Rell said she was troubled by the provisions, but urged passage as a step towards limiting the corrosive effect of special-interest money on Connecticut elections. The bill passed the House, 82-65.

Rell did not hold the disagreement against Ward. After he left the House, she named him as the commissioner of motor vehicles, a post he held for four years.

He returned to the Capitol after Cafero and Senate Minority Leader John McKinney nominated him as the Republican auditor of public accounts. Connecticut’s legislature employs a staff of professional auditors, overseen by two political appointees, one Democrat and one Republican.

He started the same day as his Democratic counterpart, John C. Geragosian, a former House member from New Britain. Geragosian was as fiscally liberal as Ward was conservative, but the pair quickly established an effective partnership.

“It was a pleasure to work with Bob,” Geragosian said. “He was one of the most honorable people I ever met. We had a great relationship.”

When Ward retired as auditor, Rell was among those who offered praise.

“He is what we need more of,” Rell said. “Bob is a gentleman who respects your opinion … who remembers we’re there to do the right thing for the state of Connecticut. That was one of his greatest gifts. He made us all think.”

The current House minority leader, Rep. Vincent J. Candelora, R-North Branford, who also holds Ward’s former seat representing the 86th House District, said Ward was a mentor and friend to him and an example for anyone in politics.

“Bob Ward was a true gentleman and the nicest person you could meet in politics, qualities not always seen in this business today,” Candelora said. “His impact on our state and the lives of the people in the towns he served is immeasurable, and his passion for introducing others to the value of community service continues to inspire me.”

Ward is survived by his wife, Anita; their son, Michael; their daughters, Rebecca, Nicole and Sarah; and eight grandchildren. North Haven Funeral Home has charge of the arrangements, which have not been finalized.

UPDATE: Calling hours are 4-8 p.m. Thursday. The funeral is noon Friday at St. Elizabeth of the Trinity in North Haven.