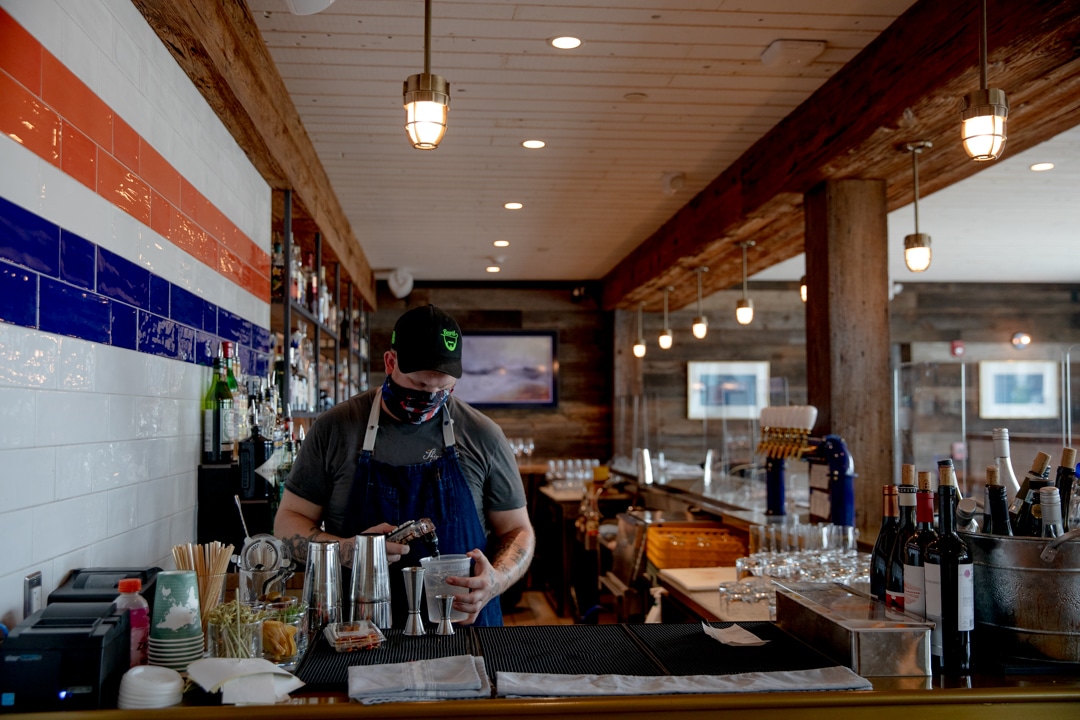 Corey Gile, a cook with The Whaler’s Inn in Mystic, makes a drink wearing a mask last August, when tourism was slow across Connecticut.

Connecticut ranks among the top third of states in terms of hospitality-sector employment loss stemming from the coronavirus pandemic, according to a new trade analysis.

The new report from the American Hotel & Lodging Association, which projects Connecticut hotel employment will still be down more than 5,900 jobs from pre-pandemic levels by the end of this year, comes as Gov. Ned Lamont and legislators try to decide what type of state relief to give the hospitality sector.

“The pandemic has been devastating to the hospitality industry workforce, wiping out 10 years of hotel job growth,” the association wrote in its analysis, adding that the nation’s leisure and hospitality sector — which includes restaurants, museums, and other tourism attractions as well as lodging businesses — is down 3.1 million jobs since the coronavirus struck early in 2020.

According to the analysis of all 50 states and the District of Columbia, Connecticut’s projected loss ranks 15th worst overall and above the national average of 20.4%.

Hawaii led all states by a wide margin and is projected to be down 45.2% of its hospitality jobs by year’s end. Massachusetts ranked second at 34.1%.

The association focused in its analysis on direct hotel jobs, such as housekeepers and desk agents. This does not include positions that restaurants, attractions, supply vendors and other related businesses might have cut because of the weakened hotel industry.

While pent-up demand for leisure travel among tourists has dominated the headlines, the pandemic has taken a deeper toll than many realize on conventions, retreats and other business ventures, said Ginny Kozlowski, executive director of the Connecticut Hotel and Lodging Association.

“We desperately need the business traveler back … and soon — very soon,” she said.

Connecticut has had success implementing its COVID-19 vaccination program, and there have been discussions about doing more to promote Connecticut as a place to do business and to see the sights.

The state’s tourism promotion program relies chiefly on receipts from a hotel occupancy tax. Gov. Ned Lamont’s budget proposal for the next two fiscal years recommends transferring $13 million from other sources to fill a projected deficit in that program.

The legislature is weighing a proposal to increase the transfer into that program by $15 million.

But hotels “are fragile, to say the least, and they do need direct support as well,” Kozlowski said.

The legislature’s Finance, Revenue and Bonding Committee approved a bill that would allow restaurants, hotels and other businesses that serve prepared food to keep — for one year — the 1% meals surcharge on the state sales tax.

This is worth almost $50 million per year, but Connecticut restaurants, which also have been hard hit by the pandemic, are expected to be the primary beneficiaries of this one-time assist.

Chris DiPentima, president and CEO of the Connecticut Business and Industry Association, said the needs are greater across the hospitality sector and state officials should develop a plan that targets all components.

“It’s imperative that we get the entire economy up and running again,” he said, adding that if legislators can steer clear of any tax hikes in the next two-year budget, that would be a tremendous assist to hotels — as well as any other business.

Lamont and legislators haven’t finished work yet on the next budget, nor on how they will spend more than $2.6 billion in new federal pandemic relief sent directly to the state’s coffers.

But the governor has recommended matching nearly $350 million in federal funds — and $480 million in state borrowing and tax credits — to jump-start the economy, through loans, grants and workforce training.

The administration plan also calls for $45 million to revitalize tourism in Connecticut, though details haven’t been released yet on how those funds would be used.